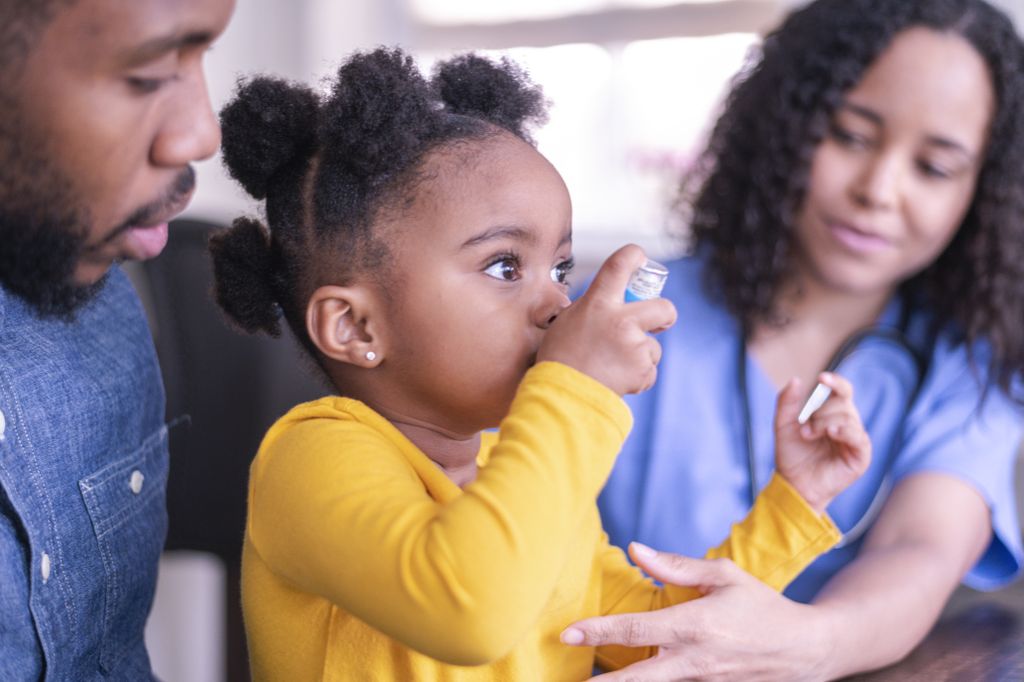 A child demonstrates that she knows how to use an inhaler during her routine asthma checkup. Her father and a nurse look on. Asthma-related emergency department use is highest among people of color, according to a recent study by OHSU researchers. (Getty Images)

A new study reveals previously unknown differences in how Black and Latino/a/x children receive care for asthma, which is already known to disproportionally affect people of color.

In an Oregon Health & Science University study recently published by the Annals of Family Medicine, researchers analyzed health data for more than 41,000 children in 18 U.S. states between 2012 and 2018. The study built on earlier research that found asthma-related emergency department use is highest among people of color. The new study is the first to show long-term disparities based on race, ethnicity and spoken languages at various health care settings.

Given the earlier findings, OHSU researchers weren’t surprised to learn their data analysis determined that Spanish-speaking Latino/a/x children are more likely than white children to receive acute asthma care at community health centers, which are local, federally supported clinics that offer health care regardless of a patient’s ability to pay.

OHSU researchers also expected to find that non-Hispanic Black children in their study were more likely than their white peers to receive asthma care at emergency departments — although researchers are uncertain whether this was because of increased need for emergency care or as a result of lack of access to primary care.

This led the study authors to hypothesize that the complex effects of poverty and discrimination might affect health care access differently for patients of various races and ethnicities. Noting how Black adults have reported that previous discriminatory experiences can prevent them from seeking health care services, the study’s authors suggested community health centers may have room for improvement in terms of providing a welcoming, supportive space for diverse patients.

Jorge Kaufmann, N.D., M.S., the study’s first author and an OHSU biostatistician, noted he and his colleagues found that 73% of the Black children in the study lived far enough below the federal poverty line to be eligible for Medicaid, compared with about 56% for Latino/a/x children. Kaufman suggested the data could help explain the asthma care disparities revealed by this study.

“It may not be just the cost of the health care that contributes to poor health outcomes,” Kaufmann said. “There are likely other aspects of poverty that affect the ability of patients to take advantage of health care services.”

However, further research is needed to better understand the cause of these disparities. Kaufmann and colleagues also plan to examine if there are similar asthma care disparities among adults, and to explore if there are differences in the way patients who were born in different countries receive asthma care.

More information about this study is available in a National Institutes of Health news release and an Annals of Family Medicine tip sheet.