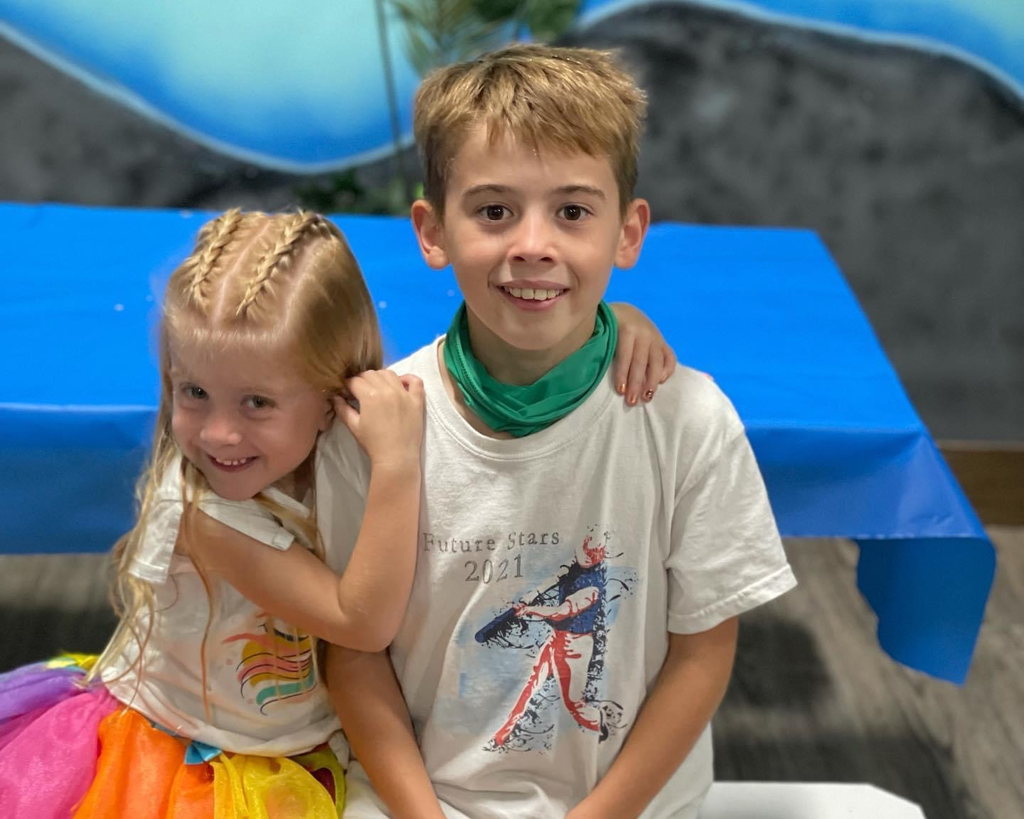 After receiving lifesaving care at OHSU Doernbecher Children’s Hospital, Khovny is a vibrant, healthy 5-year-old who likes to dance and loves her 10-year-old brother, Evan. (Courtesy of Shabri Vignery)

When baby Khovny was born, the joy of her birth was tinged with fear: She was in the Neonatal Intensive Care Unit at Oregon Health & Science University Doernbecher Children’s Hospital, being urgently treated for hydrops, a life-threatening condition in which fluids accumulate in a fetus’s body.

The experience was particularly scary for her parents, Shabri and Kevin Vignery, who had lost their baby Ryan to the same condition a year earlier. He wasn’t treated until Shabri was rushed to OHSU Doernbecher to deliver him.

“With Ryan, we didn’t catch it in time,” Shabri Vignery says. “Khovny’s experience was amazing because of the medical technologies we had at Doernbecher this time.”

Khovny’s hydrops was identified early, and the Vignerys, of Keizer, were referred to OHSU Doernbecher, whose fetal care program provides the most complex prenatal care between Seattle and San Francisco. OHSU physicians performed various in-utero, or in the uterus, procedures to help remove excess fluids, until they delivered the baby by cesarean section at 33 weeks.

Now, Khovny is a vibrant, healthy 5-year-old who likes to dance and loves her 10-year-old brother, Evan. She’s named after the physicians who helped care for her and Ryan: Stephanie Dukhovny, M.D., associate professor of obstetrics and gynecology in the OHSU School of Medicine and director of the OHSU Doernbecher Children’s Hospital Fetal Care Program; and her husband, Dmitry Dukhovny, M.D., M.P.H., a neonatologist and associate professor of pediatrics (neonatology) in the OHSU School of Medicine.

The in-utero technology that helped successfully treat Khovny is only available in Oregon at the OHSU Doernbecher Fetal Care Program. Now, with two new surgeons, that program is expanding to provide even more complex, in-utero surgeries, becoming one of the most comprehensive fetal care centers in the Pacific Northwest — transformational for families who would otherwise have to travel out-of-state for treatment.

The expansion makes OHSU Doernbecher’s Fetal Care Program one of only five programs nationally to provide medical and surgical interventions for high-risk pregnancies and newborns all under one roof. With this growth, families from Oregon and neighboring states can receive critical care at a dedicated center, close to home.

“One thing that surprised me at my initial meeting was that at that same appointment, I was able to talk to everyone — social workers, geneticists, everyone,” says Lorena Topete, who was referred to Doernbecher for treatment of her fetus’s hydrops. “They all came to me in my exam room. The fact that they have all of that available in one place and I didn’t have to move around made everything so much less stressful.”

The two fetal surgeons bring their own unique specialties to the program, providing expertise to both mother and fetus.

Andrew Chon, M.D., is a maternal-fetal medicine specialist. He completed his fellowships in maternal-fetal medicine and fetal surgery at the University of Southern California in Los Angeles. Chon specializes in multiple gestations — meaning twins and triplets — as well as prevention of premature births and minimally invasive procedures.

Chon and Sun each serve as assistant professors and have advanced training in fetal procedures, such as neural tube defect repairs, congenital diaphragmatic hernia, and twin-twin transfusion syndrome (TTTS). After their fellowship trainings in high-volume centers, both surgeons came to grow the OHSU program and to answer the need for fetal surgery care in the region.

“We have all the right components, the right team,” Sun says. “We’re excited to be able to provide even more comprehensive and complete treatment plans for our patients.”

Together, the new physicians will be able to provide in-utero treatments for nearly a dozen complex prenatal conditions, such as laser photocoagulation for TTTS — locating and sealing abnormal blood vessel connections in the placenta — and spina bifida repair, treating birth defects affecting the spine.

Topete, of Southwest Washington, was the first patient treated by the newly expanded fetal surgeon team. To treat her fetus’s hydrops in-utero, the team successfully placed a shunt to drain excess liquid, leading to a quick recovery once her baby girl was born. Now 12 weeks old, her baby is healthy and happy.

With the expansion of the team and conditions treated at OHSU, Oregonians and families across the Pacific Northwest will have better access to the broadest and most advanced range of maternal and fetal care.

“I couldn’t even imagine what it would be like if we didn’t have OHSU,” Shabri Vignery says. “I had a friend who had to go to San Francisco with complications with twins, TTTS. She did it because it was her only choice, but it was so hard.”

For families already experiencing the angst of pregnancy complications, the expanded program at OHSU simplifies logistics, eliminates the need for emergency transport, and allows patients to deliver and recover on-site while their babies receive care, Stephanie Dukhovny says.

“This allows them to stay closer to home and to their local support systems,” she says. “That is essential to both their physical and emotional well-being.”

Recently, Topete shared her story with another mother in a fetal hydrops online support group, who had to travel to another state for treatment.

“Unfortunately, that baby died by the time they got there,” Topete says. “I realized that could’ve happened to me if I needed to travel — that could’ve been my story, too.

“I’m incredibly thankful that everything worked out on my timeline. There were no unnecessary treatments, and no one dismissed any of my feelings or fears or concerns. I so appreciate OHSU having this program and all these amazing doctors.”

Previous Story Cannabis products demonstrate short-term reduction in chronic pain, little else Next Story First patient of new fetal surgery team: ‘All of them contributed to this success story’

Lorena Topete was the newly expanded fetal surgery team’s first patient. She shares her experience, from referral to her daughter’s birth.

After receiving lifesaving care at OHSU Doernbecher Children’s Hospital, Khovny is a vibrant, healthy 5-year-old who likes to dance and loves her 10-year-old brother, Evan. (Courtesy of Shabri Vignery)

The Vignery family tragically lost their newborn, Ryan, to hydrops. But thanks to complex treatment from the fetal care program at OHSU Doernbecher Children’s Hospital, their daughter Khovny was successfully treated for the same condition. (Courtesy of Shabri Vignery)

An X-ray shows fluid accumulation in newborn Ryan’s lungs. He was born with hydrops, a life-threatening condition in which fluids accumulate in a fetus’s body. (Courtesy of Shabri Vignery)