Compounds that cut off the flow of fatty fuel stop the virus from replicating in the lab, OHSU researchers find
By Tom Rickey, PNNL June 28, 2022 Portland, Oregon 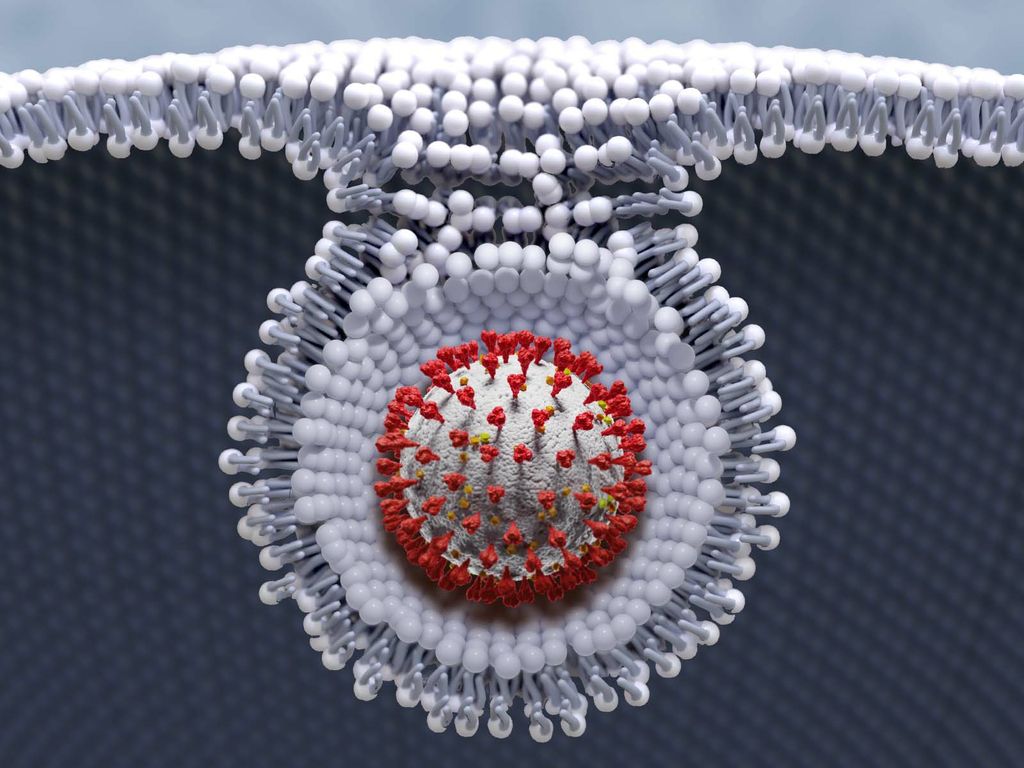 Illustration of a SARS-CoV-2 viral particle entering a cell. The particle pierces through a cell’s membrane, made of two layers of lipids.  A PNNL-OHSU team has shown how lipids are key to the ability of the virus to replicate. (Illustration by Michael Perkins/Pacific Northwest National Laboratory)

The virus that causes COVID-19 undertakes a massive takeover of the body’s fat-processing system, creating cellular storehouses of fat that empower the virus to hijack the body’s molecular machinery and cause disease. After scientists at Oregon Health & Science University and the Department of Energy’s Pacific Northwest National Laboratory discovered the important role of fat for SARS-CoV-2, they used weight-loss drugs and other fat-targeting compounds to try to stop the virus in cell culture. Cut off from its fatty fuel, the virus stopped replicating within 48 hours.

The researchers, who published their findings in Nature Communications, caution that the results are in cell culture, not in people; much more research remains to see if such compounds hold promise for people diagnosed with COVID. However, the scientists call the work a significant step toward understanding the virus.

“This is exciting work, but it’s the start of a very long journey,” said Fikadu Tafesse, Ph.D., the corresponding author of the study and assistant professor of molecular microbiology and immunology in the OHSU School of Medicine. “We have an interesting observation, but we have a lot more to learn about the mechanisms of this disease.”

The team embarked on the study based on observations that people with a high body-mass index and conditions like cardiovascular disease and diabetes are more sensitive to the disease.

The team studied the effect of SARS-CoV-2 on more than 400 lipids, or fats, in two different human cell lines. Scientists found a massive shift in lipid levels, with some fats increasing as much as 64-fold. In one cell line, nearly 80% of fats were altered by the virus; in the other, levels of slightly more than half were changed.

The lipids most affected were triglycerides, those little packets of fat that most patients try to keep to a minimum. Triglycerides are crucial for our health, allowing us to store energy and to maintain healthy membranes in our cells.

It turns out that those oily blobs of fat are also critical for the COVID-19 virus.

“Lipids are an important part of every cell. They literally hold us together by keeping our cells intact, and they’re a major source of energy storage for our bodies,” said Jennifer Kyle, Ph.D., a biomedical scientist at PNNL who specializes in the measurement of lipids. “They are an attractive target for a virus.”

When we need energy, cells break up the triglycerides into useful raw material — three fatty acids that each triglyceride molecule contains.

The team found that SARS-CoV2 doesn’t simply boost the amount of triglycerides in our cells. The virus also changes much of our fat-processing system, changing the body’s ability to use fat as fuel.

The scientists went further, looking at the effects on lipid levels of 24 of the virus’s 29 proteins. The painstaking laboratory work was done at OHSU, and then cells were sent to PNNL for measurement and analysis.

The team identified a handful of viral proteins whose effect on triglyceride levels was particularly strong. Based on the findings, the team searched databases and identified several compounds that might have potential to muck up the body’s fat-processing system. Several proved effective at stopping the virus from replicating in the laboratory.

An approved weight-loss medication, Orlistat, a lipase inhibitor that prevents triglycerides from breaking down into fatty acids, stopped viral replication. An experimental compound known as GSK2194069 also stopped the virus. These and other compounds worked against all the SARS-CoV2 variants tested: alpha, beta, gamma and delta.

“As the virus replicates, it needs a continuous supply of energy. More triglycerides could provide that energy in the form of fatty acids. But we don’t know exactly how the virus uses these lipids to its advantage,” said Tafesse, whose team has also seen lipid changes as a result of Zika virus and HIV.

The research is the result of an ongoing collaboration between OHSU and PNNL. Four years ago the institutions launched what is now known as the Pacific Northwest Biomedical Innovation Co-Laboratory, or PMedIC, where scientists and physicians work together to bring basic science and clinical experience together to explore disease and develop innovative therapies.

The effort couples basic research from PNNL, particularly the ability to measure and interpret levels of molecules like lipids, proteins and metabolites, with OHSU’s extensive experience with science and human disease. The collaboration has spawned several research projects and produced results relevant to Zika virus, kidney failure and Alzheimer’s disease.

The work was funded by the National Institute of Environmental Health Sciences (U2CES030170). PNNL also supported the work. The team made the lipid measurements using mass spectrometry at EMSL, the Environmental Molecular Sciences Laboratory, a DOE Office of Science user facility located at PNNL.

Illustration of a SARS-CoV-2 viral particle entering a cell. The particle pierces through a cell’s membrane, made of two layers of lipids.  A PNNL-OHSU team has shown how lipids are key to the ability of the virus to replicate. (Illustration by Michael Perkins/Pacific Northwest National Laboratory)

“We have an interesting observation, but we have a lot more to learn about the mechanisms of this disease," said Fikadu Tafesse, Ph.D. (OHSU)