Recent graduate Crystal Richard describes how she was inspired by hands-on learning, is determined to make a difference
By Franny White September 26, 2022 Ashland, OREGON 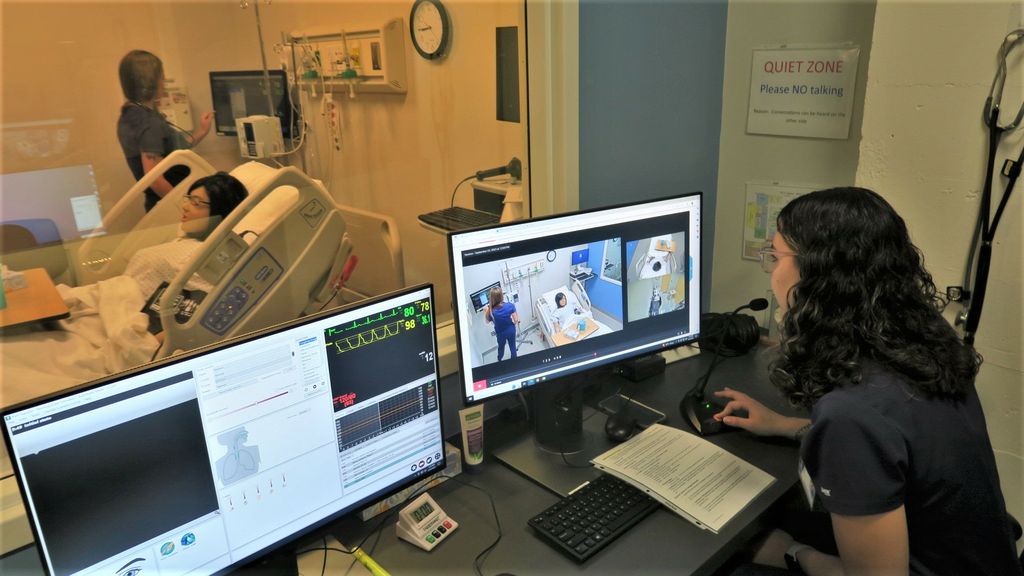 Crystal Richard, B.S., RN, CST, sees each patient as an individual with a unique perspective and doesn’t want to assume the traditional approach to health care will work for everyone.

Having recently started her first nursing job at Asante Rogue Regional Medical Center, Richard, 39, of Medford, hopes the care she offers patients will also have a broader impact on the local community as a whole.

Her personalized and compassionate approach to health care is partly rooted in the many hours Richard spent with rubbery, or simulated skin, as a first-year nursing student. For her early education at the Oregon Health & Science University School of Nursing Ashland Campus, Richard repeatedly practiced inserting hypodermic needles into squares of faux skin.

Simulations are an essential part of nursing education, and with a newly renovated Simulation and Clinicial Learning Center at the OHSU Ashland Campus, nursing students will have even more realistic practice with health care environments, better preparing them for quality patient care. Richard joined students, faculty and community at an open house Friday, Sept. 23, to celebrate the $1.1 million renovation project, a collaborative effort between OHSU and SOU.

During her time in the simulation center, Richard mastered simulated injections, then she and fellow OHSU nursing students began giving flu shots in the arms of real people, under the supervision of their licensed professors. After the pandemic hit, she eagerly volunteered to support COVID-19 vaccination clinics at community sites such as the Jackson County Expo Center. It was at one of those vaccination clinics, when a clearly nervous patient sat down before her, that she realized just how helpful her previous practice had been.

“I told them ‘I believe there’re two types of people: those who want to know when they’re about to be poked and those who don’t,’” Richard recalled. “They didn’t want to know, so I asked about their favorite Disney character instead. By the time they were sharing their answer, the injection was over. They were grateful for that.

“All those hours spent poking fake skin helped me understand the process so well that I can explain what’s happening to patients who prefer that and also try to make it as painless as possible,” Richard added.

Driven to help others

A desire to learn more and help people prompted Richard to decide to go back to school so she could become a registered nurse. She’d already worked in health care — as an emergency medical technician, a certified nursing assistant and a surgical technologist — but she wanted a new challenge.

Before returning to school, Richard volunteered with Options for Helping Residents of Ashland, or OHRA, a nonprofit that serves local residents experiencing houselessness. While there, she interacted with OHSU School of Nursing Ashland Campus faculty and students who offer foot soaks for the unhoused community. Richard was inspired by the way the OHSU team met community members without judgment — so much so that she became a shelter navigator and joined the OHSU Ashland chapter of Nursing Students Without Borders as a pre-nursing student. When it came time to apply to nursing school, Richard knew she wanted to go to OHSU.

“The OHSU nursing students I met were doing projects that really made a difference in the community, just like I wanted then, and still want to do today,” Richard said.

As a nursing student, she went on to have many hands-on opportunities with similar impacts, including a variety of clinical rotations. At a local primary care clinic, she worked with patients who were struggling with depression and substance use disorders. And while partnering with a Providence primary care clinic in Medford, she helped patients understand the practical steps they could take to lower their blood pressure and avoid having a stroke.

As the health care workforce continues to fall short of need statewide, OHSU is recruiting people like Richard who are passionate about helping their communities through improved health and well-being. OHSU hopes to increase the number of health care professionals, including nurses, throughout the state by 30% by 2030 — part of its state-funded 30-30-30 plan.

Flash forward to today, Richard is about a month into her first nursing job at the same Medford hospital where she had two clinical rotations as a student. She’s now part of Rogue Regional Medical Center’s nurse residency program for recent nursing school graduates. Working closely with experienced registered nurses in an intensive care unit, Richard is eagerly learning the ropes of critical care and looks forward to helping many patients and their families for years to come.

“I’m honored to be able to support both patients and their families during what it is likely the worst time of their lives,” Richard said of her new job in intensive care.

Aside from being there during a health crisis, Richard said she also wants to partner with patients and help them better understand their health issues, so they can take steps to improve their own well-being. Eventually, she’d like to spend part of her time caring for patients in a hospital or clinic, and the other part of her time teaching students in the hopes of inspiring the next generation of nurses — just as she was inspired by others at OHSU.

A collaborative effort between OHSU and SOU, where the OHSU Ashland Campus is based, a $1.1 million renovation project overhauled the Simulation and Clinical Learning Center’s space. The upgraded center more closely resembles real-world health care environments and can better prepare students for patient care by giving them a realistic setting to learn and refine skills.

The state-of-the-art, nearly 10,000-square-foot center features two mock health care rooms, each of which have a hospital bed and a high-tech, lifelike medical mannequin. The high-fidelity mannequins appear and feel as if they breathe, have beating hearts, bleed, speak and more — all under the control of school staff observing from a room next door. Video is recorded as students practice responding to various scenarios, including treating a heart attack, caring for patients with dementia or who have previously experienced trauma, and helping those who are near the end of life. Afterward, students and faculty watch the video together to evaluate how the student performed with patient care.

“We help our students become knowledgeable, skilled and compassionate nurses who make a real impact on their patients’ lives,” Bakewell-Sachs said. “While an essential part of an OHSU nursing education is extensive, hands-on learning in real-world settings like hospitals and clinics, we first teach students important health care knowledge and skills in simulation labs like this. Simulation provides a safe space to master new knowledge and even learn from mistakes, so students can gain confidence and competence before interacting with patients.”

Crystal Richard, shown here in 2019 as she started her nursing education at the OHSU School of Nursing Ashland Campus, earned a bachelor’s degree in nursing in the spring of 2022 and recently started her first nursing job. (OHSU/Crystal Richard)

Crystal Richard, shown here next to a medical mannequin that she used as an OHSU Ashland Camps nursing student to learn new skills and practice health care scenarios, earned a bachelor’s degree in nursing in the spring of 2022 and recently started her first nursing job. (OHSU/Crystal Richard)