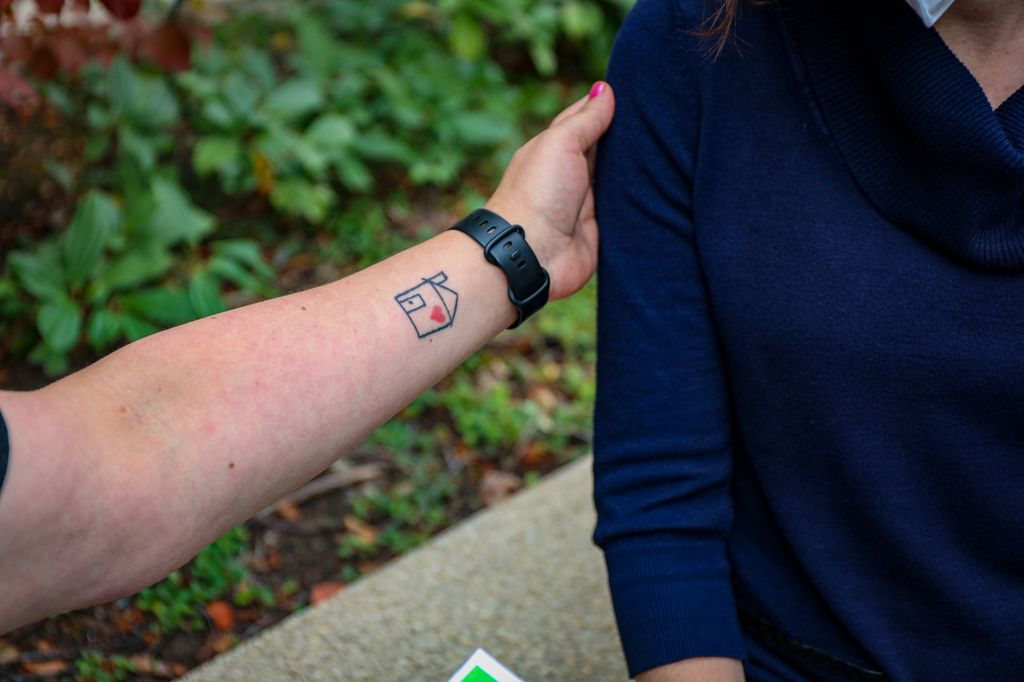 As teen suicide rates continue to rise, OHSU researchers have teamed up with the semiconductor company Analog Devices, Inc., or ADI, to develop a smartwatch that will act as an early detection system for teenagers suffering from suicidality. (OHSU/Christine Torres Hicks)

During each and every shift, David Sheridan, M.D., cares for adolescents who have come to the hospital emergency department at Oregon Health & Science University with suicidal thoughts or attempts.

“Adolescents with suicidality are presenting to emergency departments in unprecedented numbers across the country,” says Sheridan, associate professor of emergency medicine in the OHSU School of Medicine.

This disturbing trend has led Sheridan to look for creative avenues to address teenagers’ suicidal symptoms before they reach a crisis point. Building on his research identifying physiological signs of suicidality, he has teamed up with the semiconductor company Analog Devices, Inc., or ADI, to develop wearable smartwatch technology that, ultimately, they hope will act as an early detection system for individuals suffering from depression and suicidality.

“This is the first and one-of-a-kind project (a few years in making) with OHSU to leverage ADI innovative technology and products for burgeoning worldwide mental health crisis with an intent to not only save but improve and enrich human lives,” says Shekhar Bakshi, technology development director at ADI. “It’s a great example of one of the excellent collaborations between academia and industry for addressing urgent and unmet need for a tough and pressing societal issue.”

Federal data show suicide is the second-leading cause of death in youth aged 10 to 17 years, and suicide death rates for youth in the U.S. increased from 6.8 per 100,000 in 2007, to 10.7 per 100,000 in 2018. And the prevalence of suicidal thoughts or behaviors is higher than death rates: 18.8% of high school students nationwide have reported seriously considering attempting suicide; 15.7% made a plan on how to attempt suicide; and, 8.9% attempted suicide one or more times. Suicidality during the pandemic is still being studied.

Care teams can medically stabilize adolescent patients once they’re in the emergency department. But because of the enormous demand for mental health beds across the state and a limited supply of beds for adolescents, young patients often stay for days in the ED while awaiting an inpatient bed.

“This is not optimal for adolescents and families who are already stressed,” says Sheridan, adding that it’s also not optimal for the health system, because the ED needs to make beds available for new emergencies.

Almost half of adolescent patients who previously have been seen in the ED for depression or suicidality will have multiple ED visits for these crises.

“This creates a phenomenal reason to help this population in a better way and really think outside the box,” he says.

Part of the problem is that teenagers often don’t recognize their worsening suicidal symptoms, or they don’t want to address them until it’s too late to implement the preventive measures they may have developed with their mental health providers.

What if, Sheridan wondered, there was a way to alert adolescents — and their families — about increasing physiological signs of suicidality before a crisis point hits and a trip to the ED is required?

Sheridan led a recent study that found a correlation between heart rate variability, or HRV, and suicidality in teenagers.

“This study was exciting,” Sheridan says, “but more advanced analytic methods and technology are needed to expand to the real-world situations these teenagers go through every day.”

“This offers an insight into potential physiologic metrics that can be used to help adolescents potentially early on,” Sheridan says.

Steven Baker, Ph.D., electrical engineer and adjunct research professor of emergency medicine in the OHSU School of Medicine, is a co-investigator on the work with Sheridan. He has more than 30 years’ experience leading medical device development and is a key part of the study team.

Now, Sheridan and Baker have teamed up with the semiconductor company Analog Devices, Inc., to use smartwatch technology to collect advanced physiologic data.

An embedded sensor in ADI’s wrist-worn device will detect heart beats, calculating HRV in real time. The smartwatch measures heart rate with light reflectivity rather than standard electrocardiogram, or ECG, measurements to accommodate the need for mobility in the watch wearer, and so participants don’t have to wear a chest patch with adhesive ECG electrodes, explains Daniel Audesse, system and hardware senior manager of ADI Digital Healthcare Systems, who is leading the team of ADI engineers working on the smartwatch project.

The ADI watch provides both precise measurements as well as all of the raw data that can be used by researchers to develop advanced analytic methods — giving it a distinct advantage over out-of-the-box, consumer-level watches that alert the user to higher-level averages of heart rate, sleep and physical activity.

A signal quality index for heart beats developed by David Xue, senior machine learning engineer at ADI, provides researchers a quick and efficient way to filter down to the critical data.

This team is collaborating with Bonnie Nagel, Ph.D., professor of psychiatry in the OHSU School of Medicine and associate vice president for research at OHSU, to enroll a large number of adolescents with acute suicidality to understand these signals better.

“Dr. Nagel hopes to better understand the mechanisms leading to nervous system dysfunction for youth experiencing suicidality and how to modify functioning to improve mental health,” Sheridan says. “Her entire research career has been dedicated to better understanding adolescent mental health, and she has a proven track record of research success and expertise in longitudinal studies.”

In addition to the ADI smartwatch, consenting adolescents and their parents will fill out daily diaries reporting stressful behaviors; complete validated suicidality measures multiple times a day; and, receive follow-up care after the hospital.

The goal, the researchers explain, is to identify a new biometric signal using a precise and granular de-identified dataset that will allow engineers and programmers to deploy machine learning algorithms. The end result will be development of a smartwatch detection system for individuals with known depression and suicidality.

“We’ve already published previous research that found a signal,” Sheridan says. “We are now developing advanced machine learning analytics to improve and translate it. The feedback we’ve heard from parents and adolescents is they want to help advance the science because they see an obvious need for it.”

The long-term aim is to develop a monitoring system that will alert an individual and their family members to increasing signs of suicidality and the need for preventive measures earlier on.

“Parents many times say they didn’t know about their child’s mental state and feel so helpless,” Sheridan says. “This technology has the potential for parents and patients to take this back. Part of why we chose smartwatches is they are very common, and there is potential to link a parent or loved one to it. Therefore, a parent could get a notification as well to check in with their child.

“It’s a paradigm shift. We aren’t requiring suicidal patients to reach out to us, but instead we are coming to them.”

Most current mental health technology or apps on the market have very little objective data or clinical research behind it, Sheridan notes. If the team is successful, this OHSU-ADI smartwatch will be one of the first evidence-based wearable technologies to monitor suicidality.

“It’s humbling to see patient enrollment in progress, especially given that the issue of teens’ mental health was declared a national emergency by the American Academy of Pediatricians in October of 2021,” says Bakshi, of ADI. “We look forward to the study being successful and the technology being made available to adults as well — especially military veterans.”

The BIP is a collaboration of the Oregon Clinical & Translational Research Institute (OCTRI), OHSU Technology Transfer, and OHSU Collaborations & Entrepreneurship. Additional funding for the program is made possible by OHSU Innovation & Research, and the University Venture Development Fund (UVDF). OCTRI is supported by (UL1TR002369) from the National Center for Advancing Translational Science (NCATS) at the National Institutes of Health (NIH).

From left: Steven Baker, Ph.D., electrical engineer and adjunct research professor of emergency medicine in the OHSU School of Medicine, Bonnie Nagel, Ph.D., professor of psychiatry in the OHSU School of Medicine and associate vice president for research at OHSU, and David Sheridan, M.D. They have teamed up with the semiconductor company Analog Devices, Inc., to use smartwatch technology to collect advanced physiologic data. (OHSU/Christine Torres Hicks)

Bonnie Nagel, Ph.D., professor of psychiatry in the OHSU School of Medicine and associate vice president for research at OHSU, and David Sheridan, M.D. discuss smartwatch technology and how the tech will collect advanced physiologic data. (OHSU/Christine Torres Hicks)

As teen suicide rates continue to rise, OHSU researchers have teamed up with the semiconductor company Analog Devices, Inc., or ADI, to develop a smartwatch that will act as an early detection system for teenagers suffering from suicidality. (OHSU/Christine Torres Hicks)