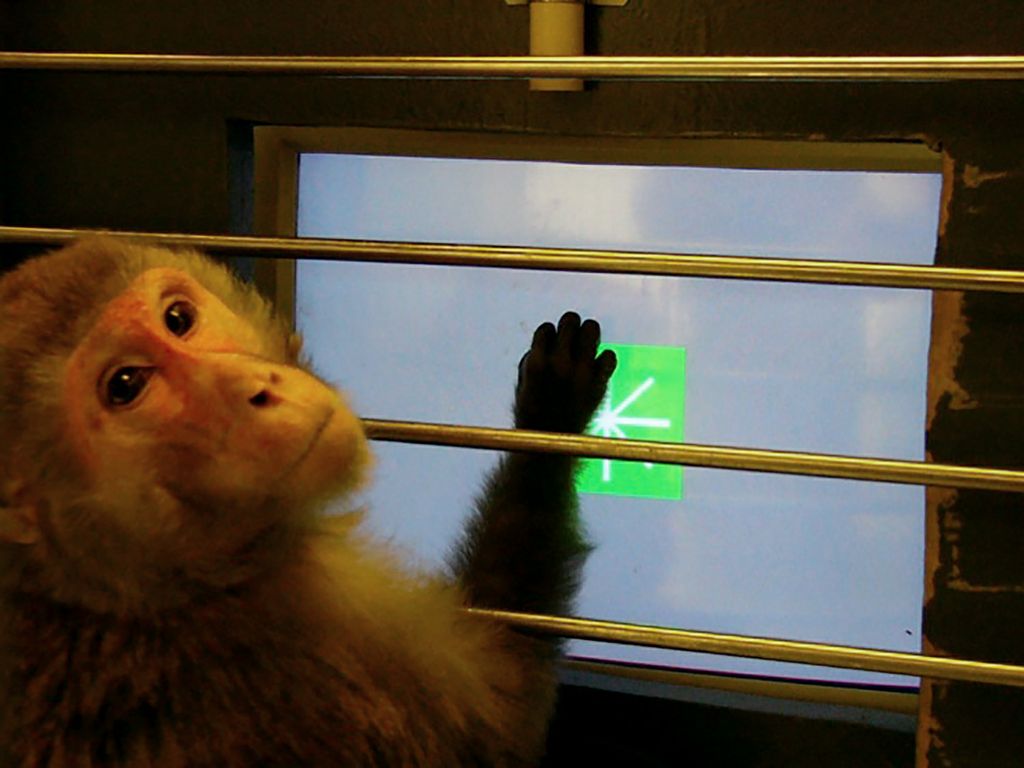 A middle-aged female rhesus monkey performs a visuospatial attention test, as part of a study at OHSU. The study demonstrated that sustained estrogen therapy early in menopause can produce long-term improvements in memory and attention. (OHSU)

During menopause, estrogen levels plummet. Some studies in people link this sharp decline to cognitive problems. While hormone replacement therapy can relieve some symptoms of menopause like hot flashes and osteoporosis, its effects on cognitive skills like reasoning and perception are not clear. In a new study published online today in The Journal of Neuroscience, researchers found that chronic administration of estradiol boosts cognitive performance in aged female rhesus monkeys.

The study suggests that sustained hormone therapy early in menopause may result in long-term benefits for cognition in women.

“There have been several previous studies published on the effect of hormone therapy on cognition in the nonhuman primate, with equivocal results,” said lead author Steven G. Kohama, Ph.D., a neuroscientist at the Oregon National Primate Research Center at OHSU. “However, in comparison to these earlier reports, our study was much longer, and it suggests a sustained benefit from early intervention after menopause with hormone treatment.”

Researchers found that animals treated with estradiol implants demonstrated improvements in both spatial working memory and visuospatial attention tests throughout the course of the one-year testing period compared with those receiving a placebo.

Post-menopausal hormone therapy (HT) is controversial and a key issue is whether it is more beneficial when given closer to menopause than when it is delayed. Researchers tested if HT in middle-aged female monkeys, shortly after surgical menopause, was beneficial for cognition. The bioidentical hormones, estradiol (E2) and progesterone (P) were used, as alternative compounds may have different effects. E2 was administered by subcutaneous implants, which bypass the processing associated with an oral route and deliver a steady level of E2. Researchers found that in both a spatial working memory and visuospatial attention test, animals on E2 alone quickly showed improvement compared to an untreated group, and the improvement was maintained across the one-year testing period. Other treatment groups, which included ovarian-intact, placebo, and a group treated with both E2 and P, showed no significant improvement on either task over time.

Animal and clinical studies examining the role of ovarian hormone replacement on cognition early in menopause are limited. The cognitive tasks researchers chose tap different cognitive domains, but have been previously shown to be E2-sensitive. However, it was an open question if older animals would be responsive. The repeated testing of the cognitive tasks verified that beneficial effects of E2 could be maintained over time. Intermittent E2 injections were also found to be effective in an earlier published study, depending on the frequency of administration, which is consistent with our results with constant E2 exposure.

Recent clinical studies, such as the ELITE and KEEPS trials, have begun to examine hormone therapy early in menopause. They are equivocal in finding benefits on markers of cardiovascular disease, but both studies found no benefit on cognitive outcomes. However, these studies also vary in their use of estrogen and progesterone formulations. Many questions remain to be addressed, including whether treatment early in menopause has long-term benefits on cognition and neurodegeneration. Model systems, such as this one using rhesus macaque monkeys, can be employed to control for environmental factors that are highly variable in clinical studies, and are a valuable tool for informing translational research.​