What’s in a zip code? Your health, as it turns out 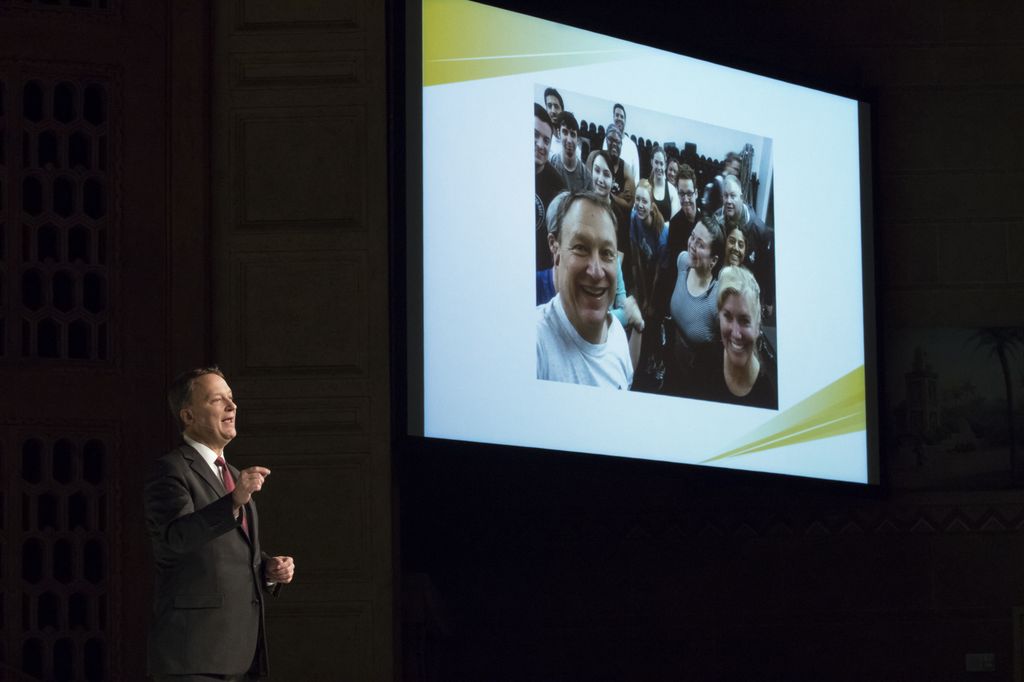 OHSU-PSU School of Public Health Dean David Bangsberg, M.D., M.P.H., shows a photo of himself with his students, saying "These students are our future health and well-being," while presenting at OHSU's Illuminate at the Portland Art Museum, January 31, 2017. (OHSU/Kristyna Wentz-Graff)

David Bangsberg M.D., M.P.H., wanted to be a neuroscientist. But two years into medical school at Johns Hopkins University, he traded his full-ride scholarship in the M.D./Ph.D. neuroscience program for a career in public health.

It wasn’t because brain surgery wasn’t important, he explained at Tuesday’s OHSU Illuminate luncheon. For him, the public health issues he witnessed first-hand as a medical student in east Baltimore -- drug addiction and the HIV epidemic of the 1980s -- simply couldn’t be ignored. From that point on, his goal was to help end public health disparities worldwide.

Now, as the founding dean of the OHSU-PSU School of Public Health, Bangsberg is carrying that torch to Oregon, his home state.

“Your zip code not only determines what school you go to, whether you go to college, and your career options,” said Bangsberg during his keynote address. “But it also determines your health, the health of your family and the health of the community.”

Bangsberg went on to explain that certain areas across our state and the nation afford different lifestyles, opportunities and support. Unfortunately, these differences are often defined by financial status or race.

“It’s not right,” Bangsberg said. “This is why public health matters.”

The epidemics of substance use, depression and suicide; the U.S.’s inability to address proper nutrition and physical activity, leading to an increase in obesity, diabetes, cardiovascular disease and cancer; as well as the slow recognition of racism, gun violence and implicit bias as public health issues, are just a few of the areas students of the new OHSU-PSU School of Public Health will tackle in the years ahead.

“Our students are the ones that will prevent one-third of Oregon women from developing depression, or they will change the trajectory of the 138,000 children in Oregon -- under the age of five -- without early childhood education and basic health services,” continued Bangsberg. “These students are the future of health and well-being across Oregon’s 96,0000 square miles of zip codes, and beyond.”

The School of Public Health is a unique collaboration between OHSU and Portland State University. It combines the strengths of a world-class academic health center with the deep community involvement and diversity of the state’s urban research university, creating a premiere location for learners who want to make Oregon, and the world, a better place. More than 1,400 students are currently enrolled and are pursuing degrees in areas such as health studies, biostatistics and epidemiology. The school awarded 45 degrees during its first commencement ceremony in June 2016.

Previous Story Taking the first step: OHSU and PSU stand together against gun violence Next Story State of the School of Medicine address captures moment of growth, investment and change

OHSU-PSU School of Public Health Dean David Bangsberg, M.D., M.P.H., shows a photo of himself with his students, saying "These students are our future health and well being," while presenting at OHSU's Illuminate luncheon at the Portland Art Museum, January 31, 2017. (OHSU/Kristyna Wentz-Graff)

PSU student Willow Wallace, 25, will be working this summer with Dr. Louis Picker on developing a cure for HIV and tuberculosis. Wallace's story was highlighted during a presentation at OHSU Illuminate luncheon, at the Portland Art Museum, January 31, 2017. (OHSU/Kristyna Wentz-Graff)

Maria Pope, chair of the OHSU board of directors, presents  at OHSU Illuminate luncheon, January 31, 2017 at the Portland Art Museum. (OHSU/Kristyna Wentz-Graff)

What's next? Discussing the future of health care and possible ACA repeal