Gene mutations cause leukemia, but which ones? 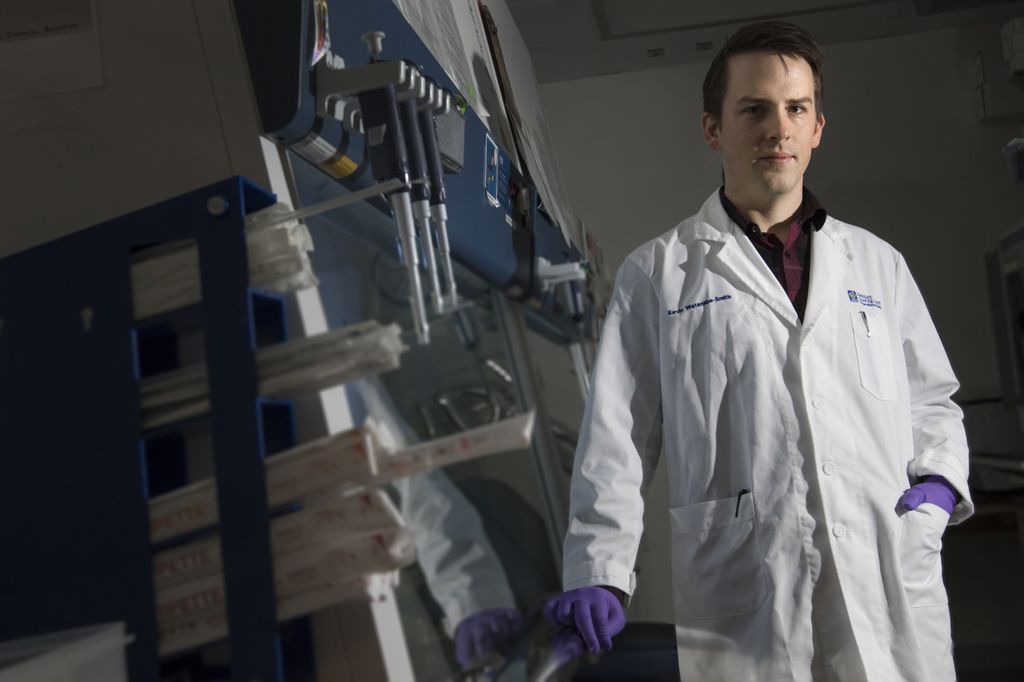 “Mutations are part of life. They are mistakes in a gene like typos in a text message,” said Watanabe-Smith, a postdoctoral fellow with the OHSU Knight Cancer Institute. “But which mutations cause cancer? That’s the real question. And this problem is impossible to understand without a strong model system to test those mutations.”

Watanabe-Smith’s research, published today in the journal Oncotarget, sought to better understand one “typo” in a standard leukemia assay, or test. While studying cancer biology and completing his doctorate in the lab of Brian Druker, M.D., at the OHSU Knight Cancer Institute, Watanabe-Smith encountered a new problem: an issue with the model system itself.

“When I was sequencing the patient’s DNA to make sure the original, known mutation is there, I was finding additional, unexpected mutations in the gene that I didn’t put there. And I was getting different mutations every time,” said Watanabe-Smith.

“Kevin and team would sequence the DNA, just to make sure the mutation’s still there, and in that process they would pick up additional mutations that we didn’t put there in the gene we were looking at,” said Tognon. “After we saw this in several cases we knew it was worth further study.”

His initial research, identifying and characterizing a growth-activating mutation in a patient with T-cell leukemia, was first published last April in the journal Leukemia. The research published today was focused on better understanding the lab’s model system, to ensure that future researchers trying to identify cancer-causing mutations are using accurate and reproducible methods.

Their research investigates a common cell line assay, used since the 1980's, to detect which mutations are important in driving leukemia and other cancers. They found this assay is prone to a previously unreported flaw, where the cells, called Ba/F3 cells, can acquire additional mutations.

“The potential impact is that a non-functional mutation could appear functional, and a researcher could publish results that would not be reproducible,” Watanabe-Smith said. “Then we had the question: 'Did the cells transform because of a mutation the patient had, or did they transform because these new mutations they managed to pick up somewhere?'”

Ultimately, he says, the research team recommends an additional step in the Ba/F3 assay (sequencing outgrown cell lines) to improve reproducibility of future results. While the results urge further research, the message to scientific community is clear: There seems to be more potential for problems than previously anticipated in this standard assay.

“We’re using this method to advance our understanding of patients' cancers. I now have a better idea of what may be contributing to this patient’s leukemia and potentially what drugs could be used to control it. It will hopefully help the next person with the same mutation,” Watanabe-Smith said.

Gene mutations cause leukemia, but which ones?