Northwest Pituitary Center at OHSU handles more pituitary cases than any other center on the West Coast
By Erik Robinson April 05, 2017 Portland, Ore. 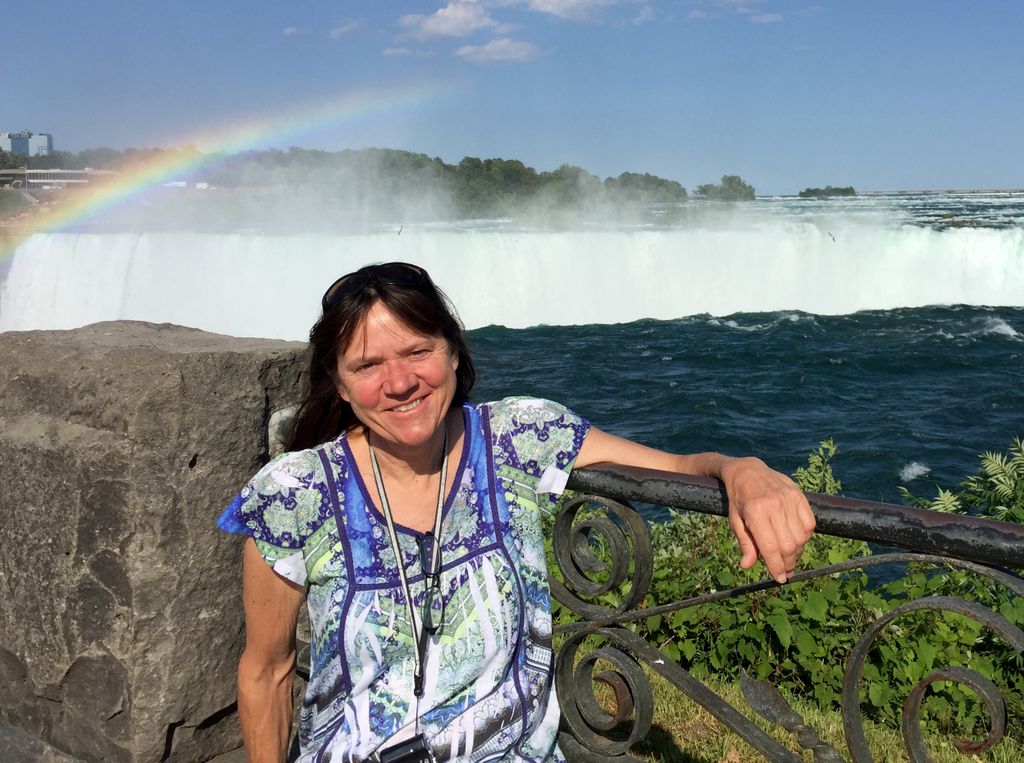 Elizabeth Whispell stands near Niagara Falls during a vacation in July of last year. A friend had noticed a slight broadening of her face and hands, a possible sign of acromegaly, which prompted her to be treated at the Northwest Pituitary Center at OHSU in the fall of 2016. (OHSU)

Elizabeth Whispell maintains an active lifestyle, so she didn’t give much thought to what seemed to be subtle changes in her appearance. It wasn’t until later that she learned she actually had a rare pituitary disorder – a condition serious enough that it ultimately required brain surgery by specialists at OHSU in Portland.

“This case is a textbook example of how the symptoms for pituitary disorders can often be missed or misdiagnosed for years,” said Maria Fleseriu, M.D., a neuroendocrinologist, professor of medicine and neurological surgery in the OHSU School of Medicine, and director of the Northwest Pituitary Center at OHSU. “Some pituitary disorders are serious and potentially life-threatening, but they’re also treatable. Early diagnosis is key in preventing long-term complications.”

Whispell noticed her hands swelling, to the point that she couldn’t wear her wedding ring. Her feet seemed to be getting bigger and it hurt to walk. And there was something a little different about her face, a slight broadening of her nose, jaw and forehead. Yet the 58-year-old Medford school resource assistant didn’t suspect these signs added up to a serious medical issue until she encountered an old friend on an annual wind-surfing vacation to the Oregon coast last summer.

“One of my friends, who hadn’t seen me in a year happened to be a research endocrinologist,” Whispell recounted. “She recognized the pattern of changes in my appearance and suggested I talk to my physician about screening for a condition known as acromegaly.”

It was the first time she had heard the term. Acromegaly is outwardly defined as the abnormal growth of the hands, feet and face caused by overproduction of growth hormone by a noncancerous tumor called an adenoma in the pituitary gland. Left untreated, the condition can lead to a range of insidious effects, including heart attacks, disabling joint conditions and vascular problems as the over-secretion of growth hormones causes many tissues, including critical organs, to expand. The adenoma itself can impinge on the optic nerve, causing blindness.

The pituitary gland is a critical part of the body’s endocrine system, the collection of glands that produce hormones regulating growth, lactation, sleep, reproduction and metabolism. Pituitary excess or deficits can significantly reduce quality of life.

In Whispell’s case, she was fortunate that she caught it relatively early. Her primary care physician ordered blood tests and referred her to an endocrinologist, who confirmed the presence of a pituitary tumor on a magnetic resonance imaging scan and referred her to the Northwest Pituitary Center at OHSU.

On Sept. 23, she met with Fleseriu, along with nurse practitioner Chris Yedinak, D.N.P., and other specialists who assessed her condition and developed a treatment plan. She also met with neurosurgeon Justin Cetas, M.D, an associate professor of neurological surgery in the OHSU School of Medicine. For Whispell, it’s a four-and-a-half-hour car trip from southern Oregon. She said she appreciated the pituitary center’s ability to coordinate her care efficiently between specialists – four appointments during each of three visits, before, during and after surgery.

“This is medicine working the way medicine is supposed to work,” she said. “This is a stressful thing to go through, to be diagnosed with a brain tumor. I gained great confidence in being able to find such a high level care within a car ride of my home, and not have to expend a great deal of energy in having to coordinate care. I was impressed with the effort they make for patients coming to OHSU from out of the area.”

On Oct. 19, Whispell underwent surgery to successfully remove the tumor.

“I didn’t know that I would feel better immediately,” Whispell said. “The second day after surgery, my hands and my feet were less swollen. I didn’t realize how bad I felt until I felt so much better afterwards. I felt a ‘new normal’ two days after the surgery.”

In one small example, she discovered she could make a fist for the first time in years.

“I was out of the hospital on the fourth day after surgery,” she said. “I was flabbergasted that I actually got a discharge on a Sunday.”

Whispell will continue to be monitored a couple of times a year for the next five years to measure her hormone levels. She doesn’t expect she will need surgery again, but she may eventually need to take medication or possibly radiation treatments to ensure the adenoma on her pituitary gland remains in check.

Meanwhile, she is looking forward to returning to her annual windsurfing vacation at the beach – this time with a clean bill of health.

Although acromegaly is relatively rare – currently estimated to affect about 4 in a million people – it is one of many hormonal issues caused by dysfunction of the pituitary gland located at the base of the brain. Some pituitary gland disorders do not cause complications, but others can cause serious problems, even blindness and death.

The Northwest Pituitary Center at OHSU cares for more than 1,500 patients a year – a higher volume than any other center on the West Coast -- including more than 200 with acromegaly and 100 treated for Cushing’s syndrome, another disorder of the body’s endocrine system. It is the most comprehensive center on the West Coast, heavily involved in clinical research, and one of the largest in the country.

Pituitary tumors were once thought to be relatively rare, however the increasing use and improvements in imaging technology enable clinicians to detect small pituitary tumors in as many as one in four patients. Some are secreting hormones in excess and some will induce pituitary deficits. Treatment can range from monitoring to surgery, medication or radiation along with follow-up monitoring and care.

Maria Fleseriu, M.D., a neuroendocrinologist, professor of medicine and neurological surgery in the OHSU School of Medicine, and director of the Northwest Pituitary Center at OHSU. (OHSU)

Elizabeth Whispell stands near Niagara Falls during a vacation in July of last year. A friend had noticed a slight broadening of her face and hands, a possible sign of acromegaly, which prompted her to be treated at the Northwest Pituitary Center at OHSU in the fall of 2016. (OHSU)