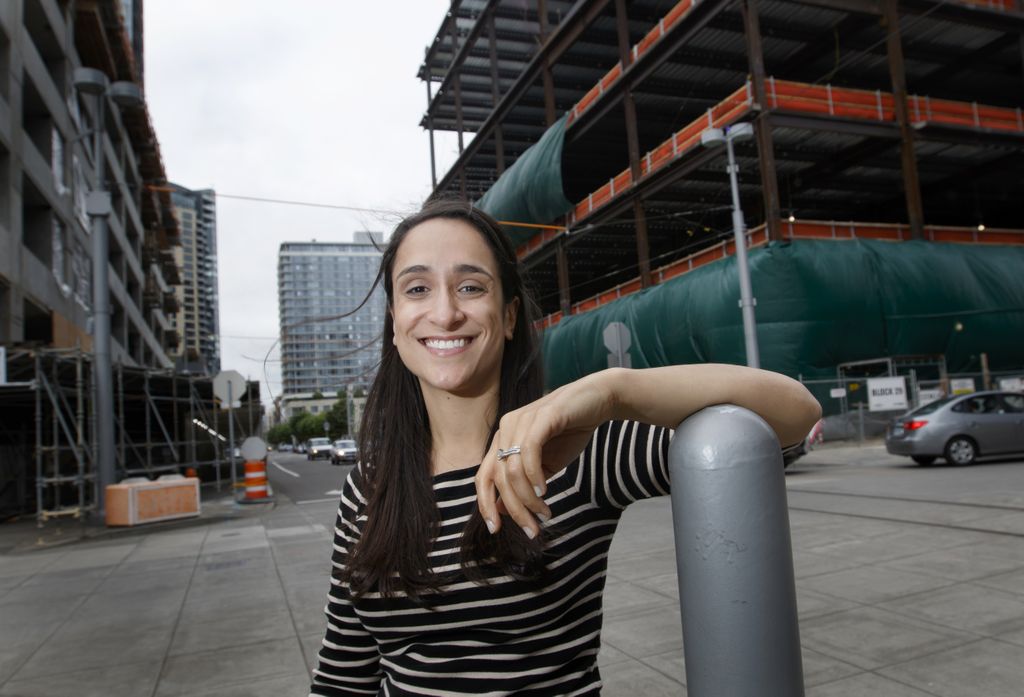 Nina Lamble, M.D., wasn’t looking for trouble. But, when it came, she didn’t hesitate.

She noticed the transgender individual walking past the Center for Health and Healing Daily Cafe that March day and then witnessed the reaction from the construction workers grabbing lunch inside. Name calling. Derision.

“I’m a physician at OHSU,” she told the men. “We welcome all individuals at OHSU. The patients we see are diverse, and we care for all.”

The most vocal worker turned his back to her. Another became threatening. Dr. Lamble told them she would relay the incident to OHSU leaders. An official contacted Hoffman Construction, the lead contractor on CHH-2. Within hours, a Hoffman manager confronted the worker, who acknowledged his actions and was terminated.

“This is a new award, and it recognizes a moment of courage by one of our colleagues,” Robertson said. “We are recognizing Dr. Nina Lamble for choosing to stand alone and not stand on the sidelines.”

Organizations give awards for many reasons. The Center for Diversity and Inclusion gives its awards to solidify, exemplify and multiply the institution’s commitment to diversity, equity and inclusion. It’s working.

Lamble accepted her plaque amid a standing ovation of 200 colleagues in the OHSU Auditorium. She approached the microphone and reflected back the light.

“I had the courage to say what I said because I knew that OHSU leadership would stand behind me,” she said. “You have been very vocal; it’s important and it’s appreciated.”

Lamble was joined at the ceremony by a total of 16 finalists recognized for their contributions to diversity and inclusion in various categories. The additional final award winners were:

Alexandra Hernandez, Med ‘19, OHSU School of Medicine, received the Outstanding Student Leadership Award for her significant and lasting impact in just two short years.  When OHSU admitted its first student participant in the Deferred Action for Childhood Arrivals program (DACA) last year but was unable to provide financial support for the student to attend, Hernandez organized a panel to educate students and administrators about the needs of DACA students and advocated with school leaders for dedicated scholarships and financial support for those accepted to the school. In addition, she’s organized mentorships for pre-medical students; student volunteers to provide medical care and support to migrant workers; panel discussions on migrant health, and a Doctor’s Back to School Day for over 400 children at a bi-lingual elementary school, inspiring students who had never thought they could become doctors.

The Casey Eye Institute received the Diversity, Equity and Inclusion Champion Program Award. A mound of commendation letters for this award from community partners told the story of a team committed to outreach here and abroad, from establishing pediatric vision screenings in Southeast Asia to making more than 200 visits to date in their mobile clinic to 65 community centers and health clinics throughout Oregon. The team also provides preschool vision screenings for Oregon children who lack access. Supported by the Oregon Elks Association, the program has provided more than 25,000 free screenings to children enrolled in Head Start Programs and Public libraries across Oregon.

Damien Fair, Ph.D., P.A.-C., associate professor, Department of Behavioral Neuroscience and Psychiatry, OHSU School of Medicine, received the Diversity, Equity and Inclusion Champion Award. Dr. Fair and his lab, a racially and culturally diverse group of 40 volunteers, undergrads, grad students, postdocs, research assistants and faculty in neuroscience, psychology, computer science and biomedical engineering are advancing the understanding of brain development across species. He and his team founded a program to increase OHSU’s ability to attract young investigators from underrepresented populations and another program that serves underrepresented students at the middle school through undergraduate levels to address educational and health disparities in underrepresented minority communities. In 2013, President Barack Obama presented Dr. Fair with a Presidential Early Career Awards for Scientists and Engineers during a ceremony in the White House.

Somnath Saha, M.D., M.P.H., staff physician at the VA Portland Health Care System and professor of medicine, OHSU School of Medicine, received the Outstanding Research Award for developing a body of evidence that demonstrates the critical imperative for diversity and inclusion in medicine to improve both patient outcomes and medical student preparedness. Early in his career, his studies found underrepresented minority patients who are cared for by physicians of the same race are more likely to receive appropriate preventive services. Later, he published a highly influential study demonstrating that diversity in medical schools leads to increased confidence in students' feelings of preparedness to care for patients from other racial and ethnic backgrounds. These studies and his other work have been foundational to many national reports, including those by the AAMC, the Health Resources and Services Administration (HRSA) and the Department of Veterans Affairs (VA).