Challenging the notion that a physician’s role ends at the exam room door
By Erin Hoover Barnett September 26, 2017 Portland, Oregon 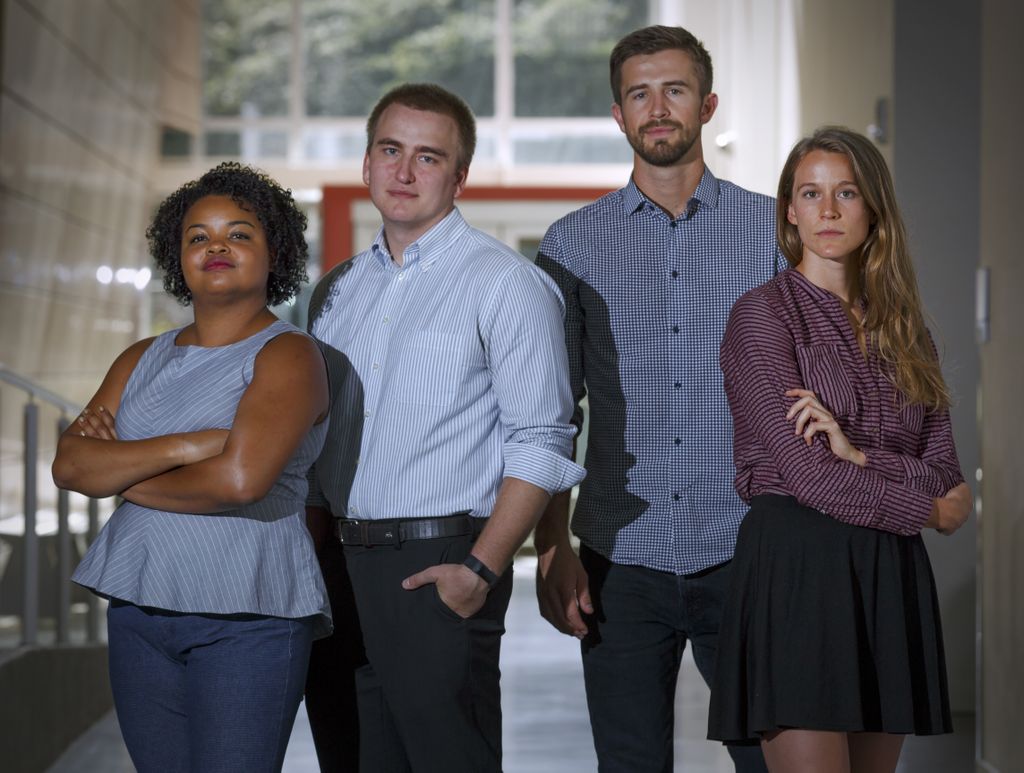 Monique Hedmann made the decision this summer after her younger sisters were racially profiled on a cross-country drive. For Lucas Stone, the decision was part of a process kindled when a faculty member’s lecture made him feel uncomfortable.

Hedmann and Stone are among 36 second-year OHSU medical students who chose to become facilitators in the Structural Competency course, part of the Health Systems thread required for all first-year students.

Structural Competency is a relatively new method of teaching medical students and residents about the ways that social, economic, legal and cultural structures impact health. Each class in this fall semester course explores issues framed by these structures - such as immigration, gender, trauma, substance abuse and racism – and how the issues affect patient care.

Developed by medical anthropologists, Structural Competency is so far only taught at a handful of U.S. medical schools. OHSU’s course is unique in that it is student-led. A faculty-taught companion course covers such areas as cultural competency and implicit bias, and faculty frame several of the Structural Competency topics in all-student lectures. But second-year medical students choose the topics and design and lead six small-group discussion sessions required for all first-year students.

“When students get to not only learn but create and teach the content, they really own it,” said Paul Gorman, M.D., professor of medicine and medical informatics and clinical epidemiology in the OHSU School of Medicine, who oversees the Health Systems thread. “The students pick the topics each year, so the course is more dynamic. As near peers, the second-year students create a safe space for first-year students to explore topics that are sometimes uncomfortable. I requested that faculty be able to sit in on the small-group sessions. I was overruled by the student leaders.”

A place to make an impact

The course was launched by students in the class of 2017 as part of OHSU’s new YOUR M.D. curriculum. A competency-based curriculum, classroom learning is condensed to move students into clinical rotations sooner where they learn by doing. Student-directed learning is a core value and a strategy for knowledge acquisition.

The theory of structural competency is to move further upstream from the social determinants of health – such as income, housing, education – to understand the forces that determine the determinants.

“More and more, we are taught the social determinants of health, but then there is no physician agency to impact the conditions that are harming our patients, and it can lead to burnout,” said Kassel Galaty, a second-year medical student who is among a core group of facilitators who coordinate the curriculum. “Learning the structures gives us a place to make an impact.”

That’s what influenced Stone and Hedmann to get involved.

Learning what he didn’t know

Growing up white in northern Idaho and Ashland, Oregon, Stone didn’t have to think a lot about race. When Barack Obama was elected president that began to change. 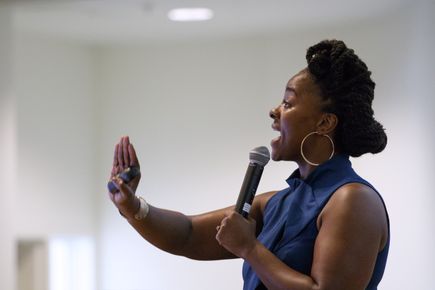 As a first-year medical student taking Structural Competency last fall, Stone listened to the lecture on structural racism by Alisha Moreland-Capuia, M.D., assistant professor of psychiatry in the OHSU School of Medicine. Learning about things like disproportionality in the prison system, exclusionary housing practices and race-based wage disparities made him feel defensive, blamed.

Then, during the presidential election, he began seeing and reading about overtly racist behavior. It was a wake-up call: this stuff is not only real, it’s still happening. He began thinking, if he could get over his discomfort and lean in, maybe he could use the credibility afforded him as a white male to contribute to positive change.

“I was tired of talking to an echo chamber in Portland. It helped me process, but it didn’t lead to action,” Stone said.

Joining the facilitation leadership team for Structural Competency and agreeing to help lead the structural racism segment was his chance. Recognizing that he lacked experience, he reached out to classmates, explaining his intentions and asking if they would be willing to share their perspectives.

One afternoon in June, Hedmann agreed to meet Stone at a cafe in the Collaborative Life Sciences Building. They talked for three hours.

As an African-American woman who has lived in Los Angeles, Atlanta, Portland and New York City and got her master’s in public health at Columbia University, Hedmann had a lot to share. She had signed up to be a facilitator for Structural Competency, but having already become vice president of their medical school class and OHSU’s chapter of the Student National Medical Association, she wasn’t going to take on the extra work of serving as a session planner - until she got the phone call from her audibly shaken sister.

Hedmann’s two younger sisters were driving west from Chicago in July when they stopped for a bathroom break at a fast-food restaurant along I-80 in Utah. The restaurant manager called police, claiming that her youngest sister smelled like marijuana. Hedmann’s sisters, in their early 20s, explained to the officer that they don’t use drugs. The officer said he didn’t smell drugs and let them go, but not before a gaggle of onlookers gathered to watch the confrontation in the parking lot.

The next day, Hedmann signed up to plan the structural racism segment of Structural Competency with Stone and fellow second-year students Jake Hillyer and Rebecca Josephson.

“We decided we wanted to create a session that made people think,” Hedmann said. “You have to assume your own ignorance in order to grow. You don’t know what you don’t know.”

Systems change when people do 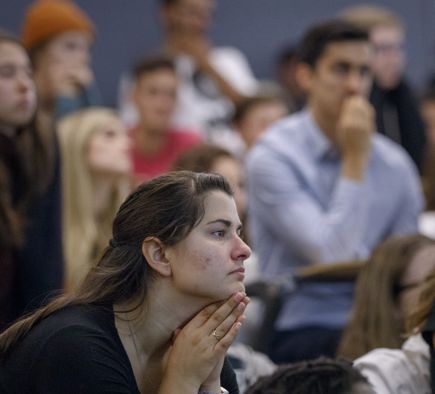 All first-year OHSU medical students take part in a Structural Competency course, a relatively new way to teach students and residents about how social, economic, legal and cultural structures impact health. Structural competency is taught at only a handful of U.S. medical schools, but OHSU's course is unique in that it is student-led. (OHSU/Kristyna Wentz-Graff)

On Sept. 15, in the late afternoon, a dozen first-year medical students made their way into Hedmann and Stone’s classroom as their peers settled into other rooms along the same corridor with other facilitators.

Most of the students had attended the noon lecture, “Racism’s Roots in Oregon,” given by Moreland-Capuia. Born and raised in Portland, educated at Stanford, George Washington and OHSU, Moreland-Capuia is the first African American native Oregonian to become licensed and board-certified in psychiatry.

She explained how America was founded on the conflicting premise of equality, but only for some, and how the still unfolding process of equality for all is so wrenching because it involves deconstructing the identity of a nation.

She reviewed Oregon history: that the state constitution forbade African-Americans from residing or owning property until 1926; urban renewal officials razed African-American homes and businesses in inner North and Northeast Portland in the 1960s; and the state didn’t adopt the 14th amendment – a civil rights era addition promising equal protection under the law – until 1973.

She talked about recent police shootings across the country of unarmed young black men. She described the fear that underlies these incidents – for the police and the victims - and how living in a heightened state of fear manifests in high blood pressure and other health conditions. She encouraged students to learn about the stresses impacting their patients and use that information to care for them.

With that as a backdrop, Stone and Hedmann passed out popcorn and cookies as the first-year’s got settled and then dove in.

They talked first about sitting with discomfort and how facing discomfort is necessary to make meaningful change. They touched on a range of topics:

Students unpack how interracial dynamics can impact patient care – and physicians’ experiences - through two case studies. In one, the physician doesn’t take seriously a black patient’s pain from sickle cell anemia. In another, a white patient refuses care from a black resident and a Latino medical student.

Then, like Moreland-Capuia’s lecture on racism in Oregon, the class ends with what students can do -- and what OHSU is already doing.

Hedmann asks a first-year student to read aloud OHSU President Joe Robertson M.D.’s Dec. 22, 2016, statement that OHSU will not honor patient requests for a specific provider based on race, ethnicity or creed:

"Discrimination has no place at OHSU and will not be tolerated. These principles are embedded in the OHSU culture, but we must redouble our commitment and raise our voice so that others may hear … We will treat all regardless of bias or bigotry, but we will not let them impose their values upon us.”

Reaction in the room is immediate.

Hedmann and Stone solicit feedback at the end.

Slinging on her backpack, first-year student Amity Calvin says the Structural Competency course is “amazingly worth it.”

“It feels so different coming from students,” she says. “They’re giving this class to us, it’s personal, intimate. It feels kind of tragic that this isn’t offered at more schools.”

All first-year OHSU medical students take part in a Structural Competency course, a relatively new way to teach students and residents about how social, economic, legal and cultural structures impact health. Structural competency is taught at only a handful of U.S. medical schools, but OHSU's course is unique in that it is led by 36 second-year students. (OHSU/Kristyna Wentz-Graff)

OHSU medical student Asma Lotfi listens to "Racism's Roots in Oregon," a lecture given by Alisha Moreland-Capuia, M.D., at OHSU, September 15, 2017.  All first-year OHSU medical students take part in a Structural Competency course, a relatively new way to teach students and residents about how social, economic, legal and cultural structures impact health. Structural competency is taught at only a handful of U.S. medical schools, but OHSU's course is unique in that it is student-led. (OHSU/Kristyna Wentz-Graff)

(Left to right) Monique Hedmann, Jake Hillyer, Lucas Stone and Rebecca Josephson are among 36 second-year OHSU medical students who are facilitators in the Structural Competency course, a relatively new way to teach students and residents about how social, economic, legal and cultural structures impact health. “I’m a big facts and data guy," says Hillyer. "We took the Oath of Geneva to do no harm. When you’re disproportionately affecting a group of people, that is doing harm.” (OHSU/Kristyna Wentz-Graff)

(Left to right) Monique Hedmann, Jake Hillyer, Lucas Stone and Rebecca Josephson are among 36 second-year OHSU medical students who are facilitators in the Structural Competency course, a relatively new way to teach students and residents about how social, economic, legal and cultural structures impact health. “It’s rewarding to be able to pass information on so that people are aware," says Hedmann. "People of color are not the only ones who are victims of racism. Everyone loses.” (OHSU/Kristyna Wentz-Graff)

All first-year OHSU medical students take part in a Structural Competency course, a relatively new way to teach students and residents about how social, economic, legal and cultural structures impact health. Structural competency is taught at only a handful of U.S. medical schools, but OHSU's course is unique in that it is student-led. (OHSU/Kristyna Wentz-Graff)