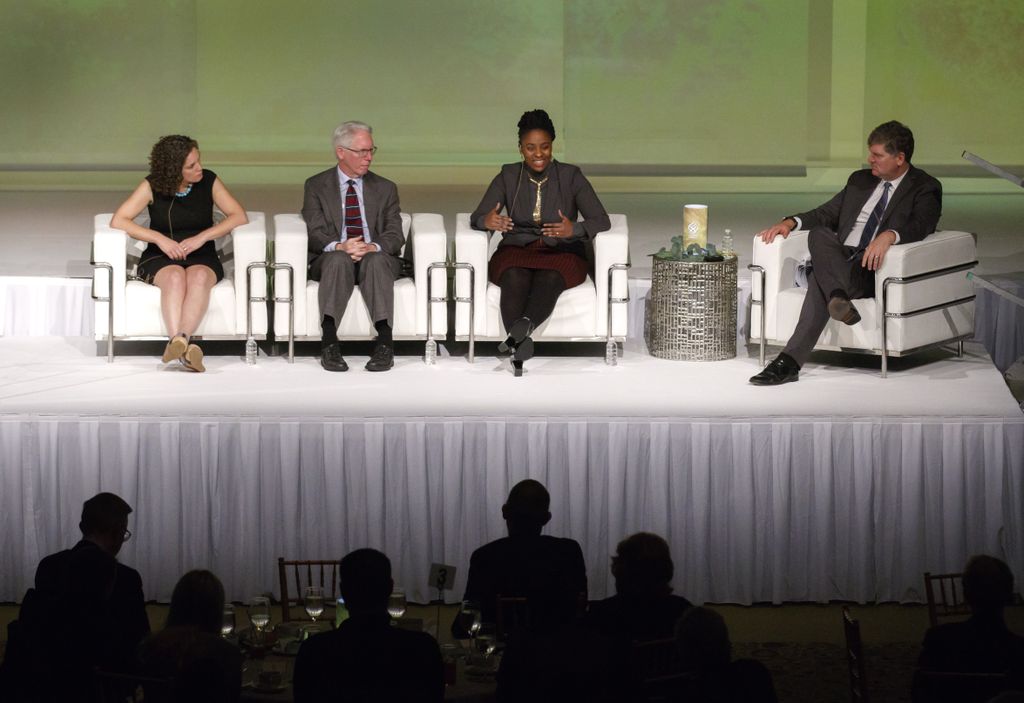 America’s opioid epidemic continues sweeping over the country, but OHSU physicians and researchers are at the forefront of efforts to reverse the tide in Oregon.

A panel of speakers cast a spotlight on the opioid epidemic, and efforts to combat it, during OHSU’s annual Illuminate luncheon at the Portland Art Museum. The panel was moderated by Dwight Holton, former U.S. attorney for Oregon who now leads Lines for Life, a suicide and substance abuse prevention nonprofit organization based in Portland.

Before understanding where we’re going to address the crisis, Moreland-Capuia said it’s important to know where we’ve been.

Fighting addiction is nothing new in American culture, Moreland-Capuia said, although the demographics and response have evolved over time. Heroin afflicted communities of color in the 1960s and ‘70s, and the response was framed largely as a public safety issue resulting in thousands of people being imprisoned. As the prescription opioid crisis took hold in the 1990s, the epidemic spread into rural, suburban and affluent communities that were largely white; the response, in turn, has been largely recognized as a public health emergency.

“We should be asking not, why the addiction – but why the pain?” Moreland-Capuia said.

She noted that pharmaceutical companies did play a role in exacerbating today’s opioid epidemic, however, the health care system must better address the underlying anxiety or depression that often leads to addiction. As a practicing psychiatrist, Moreland-Capuia believes it’s critical to ensure people have the treatment they need, especially when they're most vulnerable to relapse and overdose as they leave treatment centers, jail or the hospital.

OHSU responded to the influx of patients arriving with underlying addiction problems in 2015 by initiating Project IMPACT, or the Improving Addiction Care Team.

“Until July of 2015, we didn’t have addiction services in the hospital at OHSU,” Englander said.

Today, Project IMPACT is seen as a national model for bringing substance use treatment into the hospital setting. However, the panelists noted that much of the addiction treatment in Oregon and beyond generally falls to treatment centers that are small, underfunded and lacking physicians.

“We’re trying to buy a very important treatment at very cheap prices,” McCarty said. “Drug use disorders continue to be stigmatized. Because it’s a disorder, we treat it. But because many people view it as a sin, we don’t treat it very well.”

Panelists said this stigma remains, even as leaders across the political spectrum acknowledge the scope of the public health emergency. Last year alone, Holton said, more than 60,000 people died from overdoses in the United States – more than the number of U.S. soldiers killed during the entire Vietnam War.

Overcoming the stigma may improve access to effective treatment.

“We need low-barrier treatment,” Englander said. “So often people get fired from treatment because the treatment didn’t work. Instead, we need to explore new treatments and new ways to engage patients.”

A panel discussion on fighting the opioid epidemic was the focus of the 2017 OHSU Illuminate luncheon, November 8, 2017. (OHSU/Kristyna Wentz-Graff)