A story of Hope 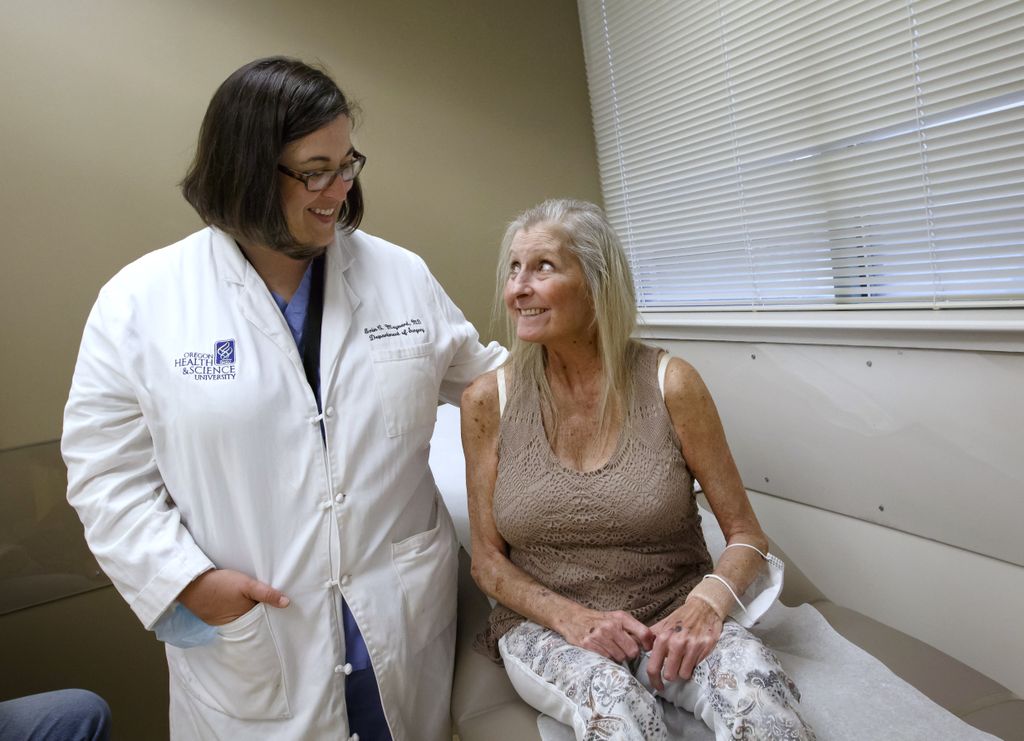 A year ago, Vicki Hope’s upper spine had degraded to the point that she could scarcely lift her chin up from her chest. Worse, the condition prevented her from undergoing the organ transplant she would soon desperately need because of her failing liver. In short, she would need the kind of specialized, multifaceted care delivered by Oregon’s only academic health center.

Fortunately for her, OHSU surgical teams working a few months apart turned her life around. Her spine was repaired and the 57-year-old Boring resident is now growing accustomed to life with a functioning liver and a forward-looking perspective.

“I’m getting my life back,” she said. 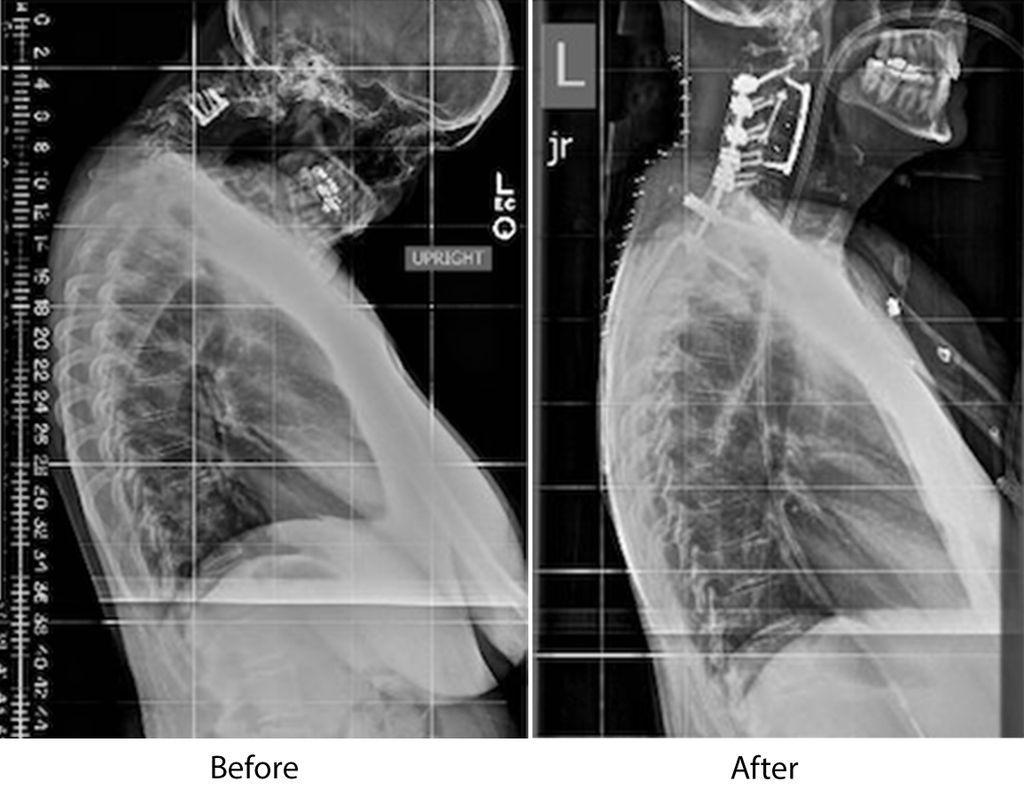 Before and after images show the drastic change in outlook for Vicki Hope, 56, of Boring, who underwent spinal repair surgery to correct a rare condition known as dropped head syndrome. (OHSU/Kristyna Wentz-Graff)

Her story began early in the year with what she initially believed to be a pinched nerve. Over the course of the year, she increasingly lost feeling in her fingers and legs as her head tilted forward. By the time she was referred to OHSU, her second vertebrae had slipped totally out of alignment, and her third and fourth vertebrae were degraded. The condition ultimately worsened to the point that her chin dropped to her chest – a rare condition known as dropped head syndrome.

That was not the end of Hope’s health problems.

As it happened, Hope also suffered from primary biliary cholangitis, a chronic liver disease that damages and can ultimately destroy bile ducts in the liver. She knew at some point she would need a life-saving liver transplant. Unfortunately for her, the spinal condition precluded surgeons from safely being able to intubate her for a transplant surgery – just as the liver condition was reaching a critical point.

First, however, Hope had to have her spine repaired in a complicated front-back operation. On Nov. 30, Khoi Than, M.D., an assistant professor of neurosurgery in the OHSU School of Medicine, removed Hope’s third and fourth vertebrae and replaced them with a cage packed with bone, a procedure known as anterior cervical corpectomy. She then had a posterior fusion spanning eight spinal levels. That followed two days of traction involving 40 pounds of weight attached to her head.

The successful operation allowed her to go back on the waiting list for a liver transplant.

As she waited, her condition worsened. Even though Hope had known that one day she would eventually need a liver transplant, she had managed the liver condition safely for more than 20 years. Yet, in just a matter of weeks following the successful spinal surgery, her liver deteriorated to the point where she became visibly jaundiced, as reflected in a news story that initially aired on KGW-TV in February. Despite the successful spinal surgery, she was in a race against time.

Hope and her husband, Ed Hope, recall waiting by the phone, desperate for the call they worried would come too late. Finally, late in the evening of April 20, the phone rang. 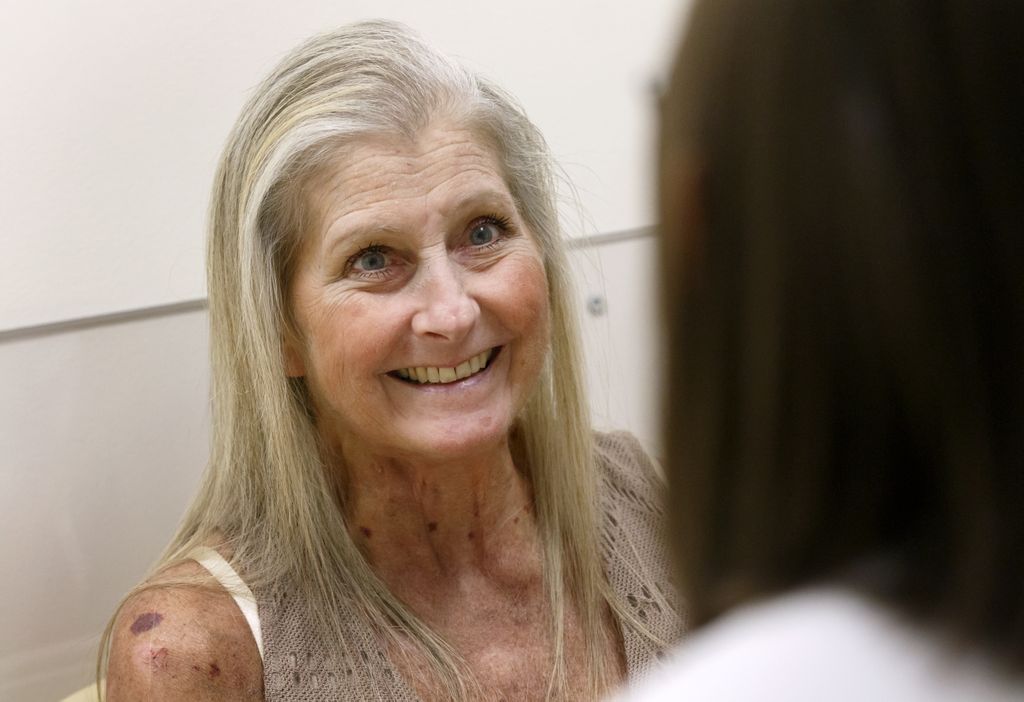 Vicki Hope says she’s grateful for the advanced surgical care she received at OHSU, but she’s also keenly aware of the fact that she owes her life to the generosity of an organ donor. "I think everyone should be on the donor list," she said. (OHSU/Kristyna Wentz-Graff)

On April 24, she was back at OHSU, this time to receive a donated liver. Erin Maynard, M.D., an assistant professor of surgery (abdominal organ transplantation) in the OHSU School of Medicine, performed the operation. By the end of the day, Hope had a new liver and a new lease on life. She’s grateful for the advanced surgical care she received at OHSU, but she’s also keenly aware of the fact that she owes her life to the generosity of an organ donor.

“My husband and I, and both of our children, checked the ‘D’ for donor when we renewed our driver’s license,” Hope said. “I just want to say ‘thank you’ to whoever did that for me. I think everyone should be on the donor list.”

In 2016, the Pacific Northwest Transplant Bank at OHSU set records for the number of donors and organs transplanted in its federally designated service area of Oregon, southern Washington and southwestern Idaho: A total of 121 donors provided 392 people a new lease on life through transplantation.

“We celebrate this success but remain ever mindful of the fact that, on average, 22 people die every day waiting for an organ transplant in the United States,” said Mike Seely, executive director of the transplant bank. “Donated organs are a precious and very limited resource. They come from magnanimous people and their families, who make the gift of life possible.”

For Hope, after an eventful year, she’s looking forward to hosting a full slate of family holiday activities just as she’s done in years past.

“Every year in the past, I’ve hosted our family for Christmas Eve at our house, but last year one of my siblings took over,” Hope said. “They asked, ‘Can you do it this year?’ They’re all eagerly awaiting the normal Christmas Eve festivities.”

Vicki Hope, 56, of Boring underwent spinal repair surgery on Nov. 28, 2016 at OHSU to correct a rare condition known as dropped head syndrome. Her third and fourth vertebrae were removed and replaced with a cage packed with bone. (OHSU/Kristyna Wentz-Graff)

Khoi Than, M.D., an assistant professor of neurosurgery in the OHSU School of Medicine who described Hope’s condition as the worst case of dropped head syndrome he’d ever seen. Vicki Hope, 56, of Boring underwent spinal repair surgery on Nov. 28, 2016 at OHSU to correct a rare condition known as dropped head syndrome. (OHSU/Kristyna Wentz-Graff)

Before and after images show the drastic change in outlook for Vicki Hope, 56, of Boring, who underwent spinal repair surgery on Nov. 28, 2016 at OHSU to correct a rare condition known as dropped head syndrome. (OHSU/Kristyna Wentz-Graff)

A fresh outlook on life