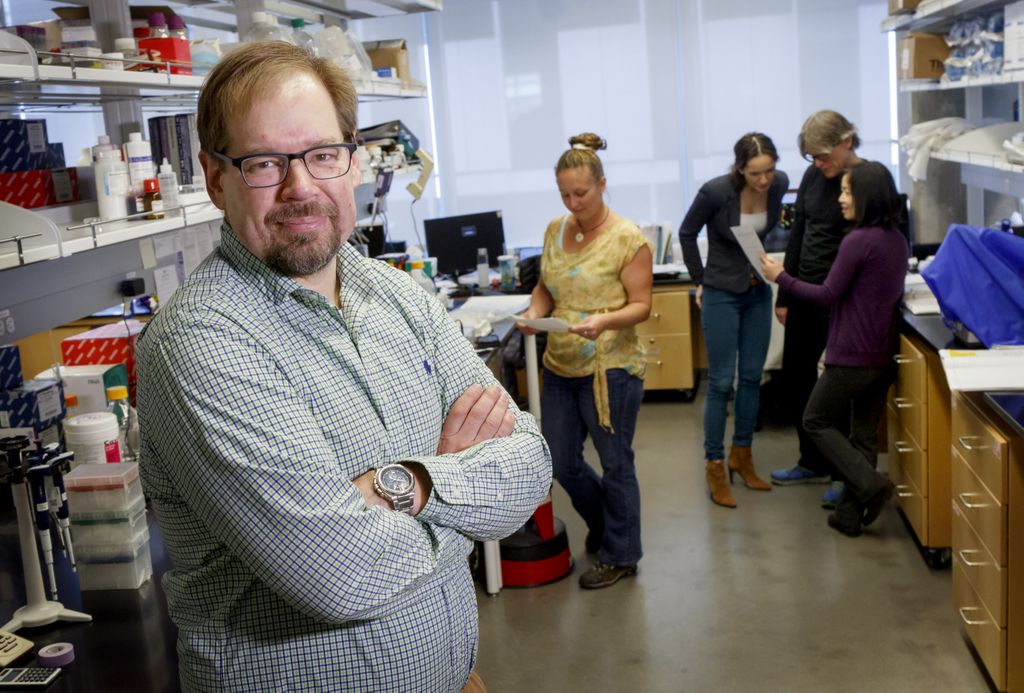 OHSU researcher Jim Korkola, Ph.D., (left) and colleagues discovered the role the 'microenvironment' surrounding a tumor plays in how a common type of breast cancer responds to treatment. (OHSU/Kristyna Wentz-Graff)

Cancer is typically thought of as a tumor that needs to be removed or an area that needs to be treated with radiation or chemotherapy. As a physicist and cancer researcher, Joe Gray, Ph.D., thinks differently.

“Cancer is a complex mixture of cancer cells, normal blood cells, tissue and immune cells. Tumor cells themselves alter the microenvironment to secrete things that help tumors grow,” he said.

Gray and Jim Korkola, Ph.D., led a team of OHSU researchers to publish a paper in Cell Systems focused on the area around a tumor, called the microenvironment.

“We were interested in exploring a large number of signals from the different cells and components of cancer to understand what they do with therapeutic response,” said Gray, the OHSU Knight Cancer Institute associate director for biophysical oncology and professor of biomedical engineering in the OHSU School of Medicine. 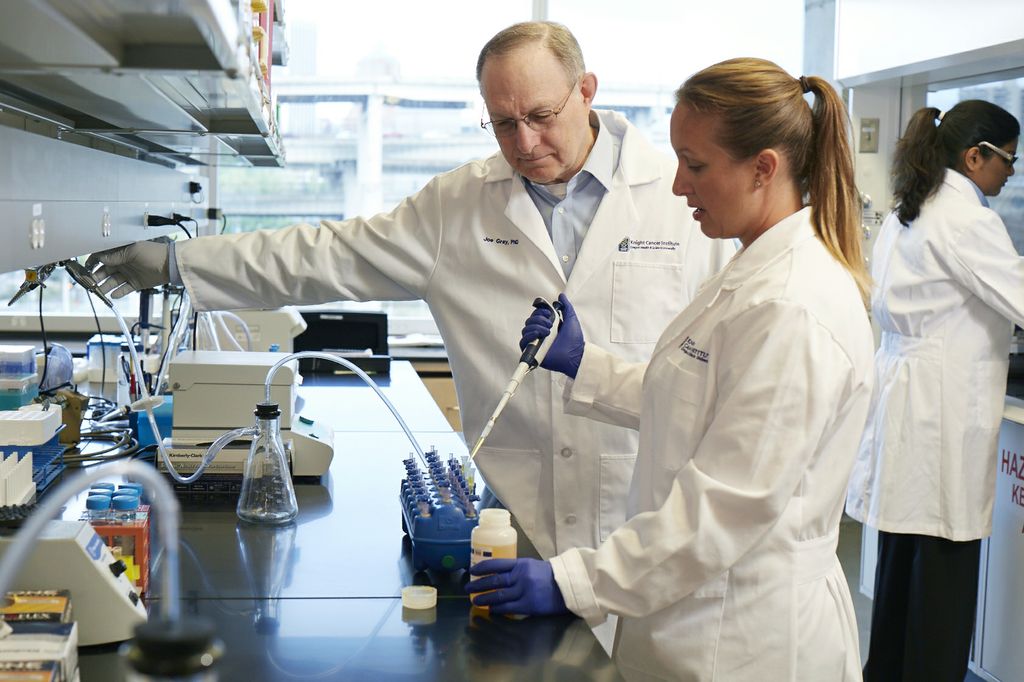 The HER2 positive microenvironment

The researchers focused on a type of breast cancer that tests positive for a protein called human epidermal growth factor receptor 2, or HER2, which promotes cancer cell growth. This overexpression of HER2 occurs in roughly 25 percent of all breast cancer cases.

Korkola, an assistant professor of biomedical engineering in the OHSU School of Medicine and co-principal investigator, says this is the first comprehensive study of the microenvironment and its influence on HER2 positive cells. He says studying the area surrounding a tumor is important for a number of reasons: “One of those reasons is that there can be a disconnect between how cells behave in simple cell line models and how they behave in patients.”

To better understand the cell behavior and response, Korkola and team printed samples, or arrays, of different proteins to produce microenvironment microarrays (MEMA). The researchers used robotic devices to print thousands of microenvironment conditions on a single microscope slide. Printing at that large scale gave them the ability to observe different interactions within the microenvironment and how the cells behave when faced with two different HER2 positive-targeted drug treatments used in patients today: lapatinib and neratinib. 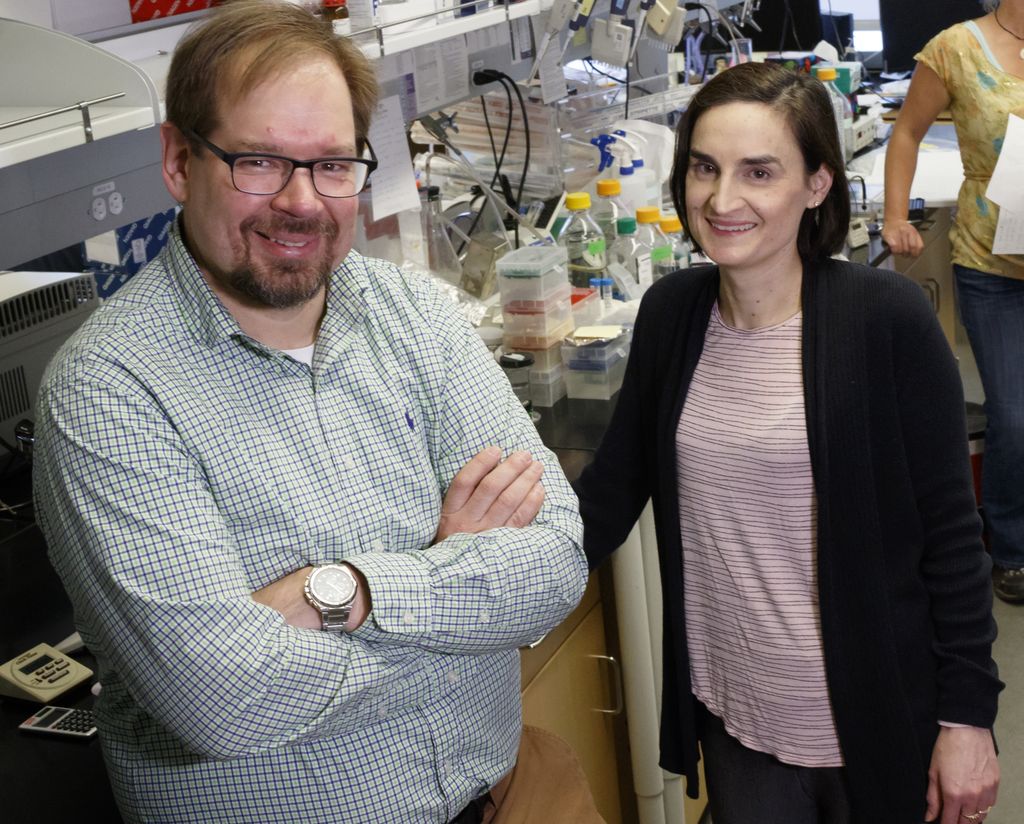 OHSU researcher Jim Korkola, Ph.D., (left) talks with Laura Heiser, Ph.D. in the lab. Korkola says this is the first comprehensive study of the microenvironment and its influence on HER2 positive cells. (OHSU/Kristyna Wentz-Graff)

Using cell lines derived from human tumors, the study team tested around 2,500 combinations of micro-environmental proteins to determine how they would alter the cellular response to the two different HER2-targeted drugs.  They studied these effects in two different molecular subtypes of HER2 positive breast cancer cells, known as HER2E and L-HER2 positive disease.

The work showed that the tumor microenvironment plays a critical role in altering therapeutic response in HER2-positive breast cancer cell lines, which they were able to further confirm in a mouse model. The results suggest fundamental differences exist in the two breast cancer subtypes, which supports the emerging notion that L-HER2+ and HER2E represent distinct diseases.

In the research paper, Korkola, Gray and team suggest future clinical studies to test the possibility that targeting resistance factors from the microenvironment in both subtypes will improve clinical outcome in patients being treated with HER2-targeted drugs. In fact, the research team is pursuing funding options that would allow preliminary testing in patients, as part of a partnership with breast cancer expert Zahi Mitri, M.D., an assistant professor of medicine (general internal medicine) in the OHSU School of Medicine, and a biotechnology company.

“This type of research is an important part of a precision oncology effort underway at the Knight Cancer Institute,” Gray said. “Our goal is to develop therapeutic strategies that are more durable — and tolerable — for patients.” 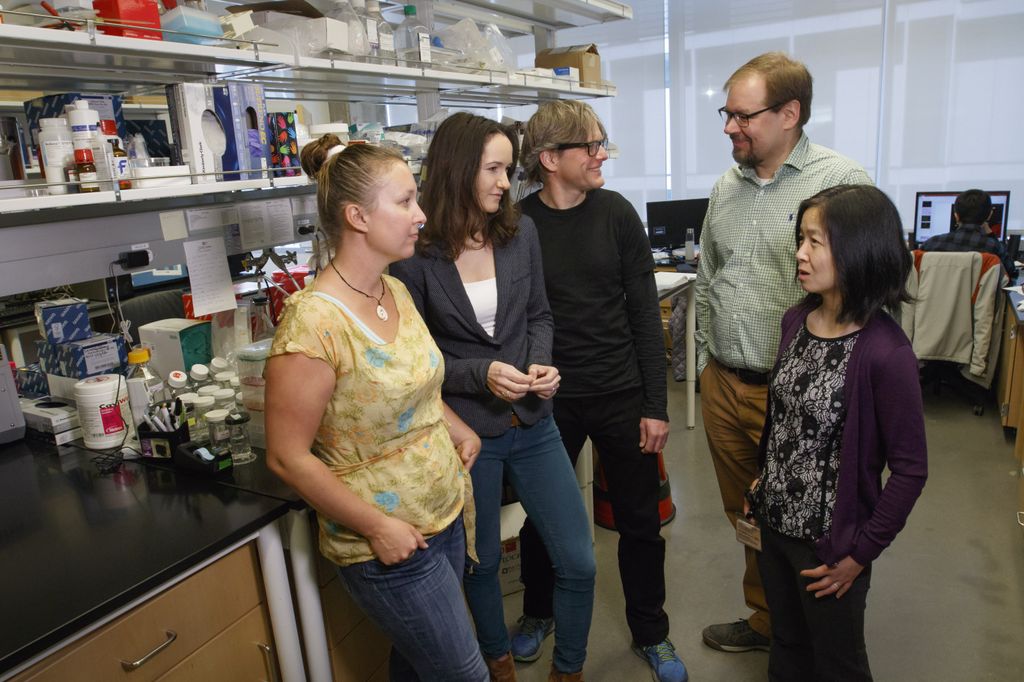 Bringing together the right team

Gray says the impetus for this research project — including the new use of MEMA — dates back to 2012. “If you’re going to bring on a new way of measuring things, you have to make the platform work, develop the analytical tools to interpret the data and do the experiment,” he said. “There is a significant gestation time to build and test a useful platform.”

And in order to effectively build a new testing platform, it takes a multidisciplinary team.

“It’s not possible for a single small lab to pull off an experiment of this complexity. We brought together biologists, people who run the robotics, imaging experts and computational biology experts,” Korkola said. “In fact, these experiments formed the bulk of the Ph.D. thesis of Spencer Watson, the lead author. He did a superb job and is now pursuing his post-doc in Switzerland. Without the team effort, we never would have been able to make the discoveries we report in the paper.”

Gray also emphasizes the important role the Susan G. Komen Foundation played in this research. “They were one of the real drivers of the project, along with the NIH,” he said. “They played an integral role in helping us to develop this new line of research.” He added the data and tools used in this study are publicly available on a website hosted by the National Institutes of Health LINCS consortium.

An OHSU research team reveals the 'microenvironment' surrounding a tumor plays a critical role in how a common type of breast cancer responds to treatment. Some of the authors on the paper: (left to right) Tiera Liby, M.Sc.; Zuzana Tatarova, Ph.D.; Elmar Bucher, B.Sc.; Jim Korkola, Ph.D., and Moqing Liu, Ph.D. (OHSU/Kristyna Wentz-Graff)

An OHSU research team reveals the 'microenvironment' surrounding a tumor plays a critical role in how a common type of breast cancer responds to treatment. Some of the authors on the paper: (left to right) Tiera Liby, M.Sc.; Zuzana Tatarova, Ph.D.; Elmar Bucher, B.Sc.; Jim Korkola, Ph.D., and Moqing Liu, Ph.D. (OHSU/Kristyna Wentz-Graff)

OHSU researcher Jim Korkola, Ph.D., (left) and colleagues discovered the role the 'microenvironment' surrounding a tumor plays in how a common type of breast cancer responds to treatment. (OHSU/Kristyna Wentz-Graff)