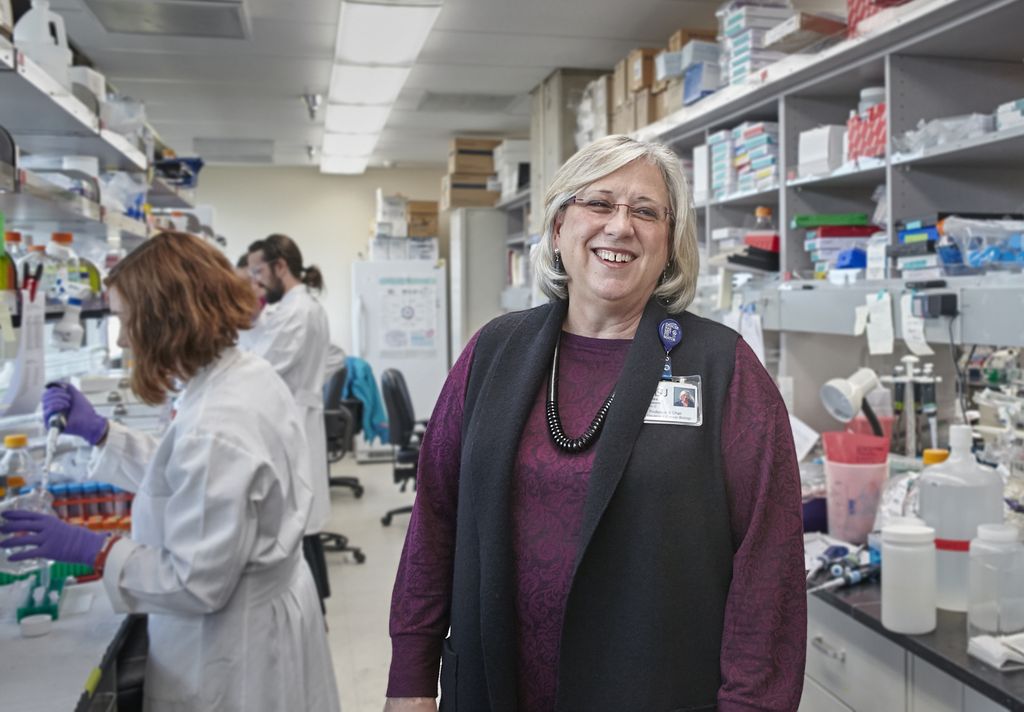 Lisa Coussens, Ph.D., has been awarded the 2018 Princess Takamatsu Memorial Lectureship by the American Association for Cancer Research, for her laboratory’s body of work and contributions to the field of cancer research. (Photo courtesy Metro/Sally Painter)

Early in her career, Lisa M. Coussens, Ph.D., had mentors who pushed her to think differently.

“It’s always been my belief that you’re not going to make substantial advances in science if you’re not willing to challenge dogma,” she said. “If you don’t, you’ll just end up with more research papers that look like all the other papers.”

Coussens, the OHSU Knight Cancer Institute’s associate director, and chair of the Department of Cell, Developmental and Cancer Biology in the OHSU School of Medicine, says heeding that advice has served her well throughout her career.

In recognition of her laboratory’s body of work and contributions to the field of cancer research, the American Association for Cancer Research, or AACR, will award Coussens its 2018 Princess Takamatsu Memorial Lectureship at its annual meeting in Chicago later this month.

“The AACR serves those that have dedicated their lives to impacting cancer research and patients with cancer,” says Coussens. “It is quite an honor to be recognized by my peers, and I am incredibly humbled.”

The AACR established the Princess Takamatsu Memorial Lectureship in 2007 to commemorate the Japanese royal who was a prominent champion of cancer research from the 1930s until her death in 2004. In addition to receiving the award, Coussens will present the Takamatsu lecture on April 16.

Coussens says she had the privilege of attending a Princess Takamatsu Symposium in Japan early in her career.

“Attending that symposium was incredibly impactful,” she said, “The princess was a strong advocate for cancer research in the academic and private sectors, and of course through her generous philanthropy. Her passion for cancer research makes receiving this award in her honor all the more humbling.”

Coussens is quick to point out that this award was not earned by her alone.

“This recognizes the impact of the science that has come out of my laboratory throughout my career,” she says. “The scientists and teammates I have collaborated with have impacted the way the cancer research community thinks about or treats the fundamental mechanisms of cancer; that’s very gratifying.”

The success of her lab, Coussens says, can in part be attributed to a few key early findings.

“Some of those were diametrically opposed to prevailing dogma at the time and stood out,” she says. “In hindsight, that perhaps served my lab well. Some of those resulting reports provided a paradigm shift, an alternative way to think about cancer development.”

Coussens’ lab focuses on the role of immune cells in cancer and identifying new targets for therapies to block critical steps in the interactions between tumors and infiltrating immune cells. She says everyone in her lab has a slightly different focus, but they are all investigating how the immune microenvironment impacts malignant cancer cells.

The role of running a lab, Coussens believes, is to provide personal and professional perspective to trainees. She works to challenge their thinking, like her mentors did for her.

“I ask the hard questions,” she says. “Sometimes we’re right, sometimes we’re not. But I always try to follow my instincts and encourage them to do the same.”

A risk-taking, challenging environment is not always suited for everyone, however.

“If someone’s goals aren’t aligned with that way of thinking, my lab is perhaps not the right lab for them,” Coussens say. “To some, it can come across as too intense, intimidating or risky. But the magic happens when you push the envelope.”

In thinking about the future of cancer research, Coussens says she has seen many theories come and go. Her longstanding focus is still exploring what is now the promising field of immunotherapy.

“Immunotherapy has changed cancer medicine forever,” Coussens says. “Many of us have been working in this area throughout our careers, and we now have drugs available to target the immune system. With the development of a few key drugs, the landscape has changed forever.”

Coussens points to the work of Brian Druker, M.D., director of the OHSU Knight Cancer Institute, with the development of the drug Gleevec to target malignant cells in patients with chronic myeloid leukemia, as an example of the pioneering breakthroughs that have advanced cancer research.

“The giants in the field of cancer biology have opened the doors before us, and enabled all the work done in my lab today,” she says. “The future of cancer research and cancer medicine is bright.”

Lisa Coussens, Ph.D., has been awarded the 2018 Princess Takamatsu Memorial Lectureship by the American Association for Cancer Research, for her laboratory’s body of work and contributions to the field of cancer research. (Photo courtesy Metro/Sally Painter)