OHSU’s Eric Gouaux has already amassed prolific record of discoveries about how the brain works
By Erik Robinson May 15, 2018 Portland, Oregon 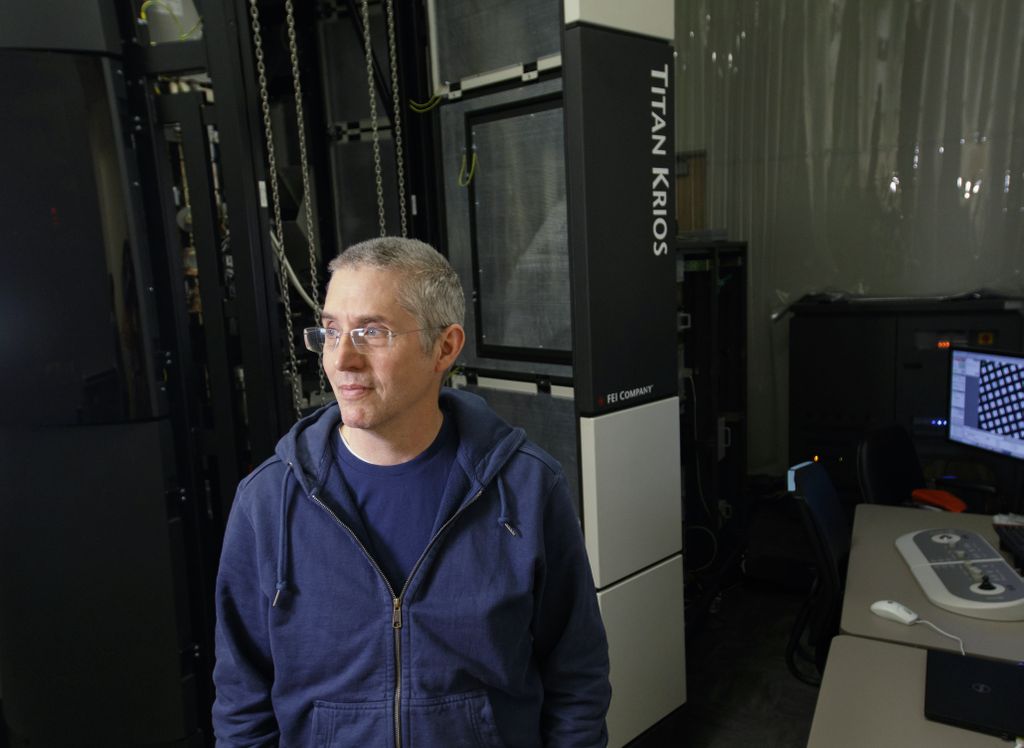 OHSU structural biologist Eric Gouaux, Ph.D., has earned an international reputation for his discoveries about how the brain works.

Gouaux, senior scientist at the OHSU Vollum Institute and an investigator for the Howard Hughes Medical Institute, has relied on X-ray crystallography for many of his discoveries. The technique has enabled him to visualize the molecular structure and function of chemical synapses fundamental to all our actions, from movement to thought.

“Everything is moving to cryo-electron microscopy,” Gouaux said.

Gouaux is one of three principal investigators involved in the new Pacific Northwest Center for Cryo-EM, along with Michael Chapman, Ph.D., professor of biochemistry and molecular biology in the OHSU School of Medicine, and James Evans, Ph.D., senior research scientist at the Pacific Northwest National Laboratory in Richland, Washington.

The technique enables researchers to visualize biological molecules at an atomic scale, and to see them in their natural state. By contrast, X-ray crystallography required billions of molecules to be arranged into crystals in order to get an image.

“Crystals are like sardines in a can – they’re pressed together in only one shape,” Gouaux said. “But we know sardines adopt lots of different shapes when they’re swimming around in the ocean.”

Accordingly, Gouaux expects the widespread use of cryo-EM will enable scientists to produce images of much more complicated assemblies of cells in their conformational, or natural, state. Even though he’s spent his career working in X-ray crystallography, Gouaux says he’s now a convert to cryo-EM.

That should provide a boost to Gouaux’s body of work, which already spans several important areas of structural biology.

The Gouaux lab’s pace of discovery about the complex workings of the brain is almost unheard of; Gouaux alone has 117 publications listed on his research profile. The team has conducted pioneering research in how dopamine – which helps control the brain’s reward and pleasure centers — is transported, creating insights into a range of mood disorders and how drugs such as cocaine and amphetamines disrupt the brain’s normal function. Gouaux’s work focusing on proteins in nerve cells, called NMDA receptors, is helping to lay the groundwork for new, faster-acting treatments for depression and anxiety disorders.

“Even though Eric is relatively young, his research has been cited more than 23,000 times,” said Marc Freeman, Ph.D., director of the Vollum Institute.

With the benefit of cryo-EM, Gouaux says he’s only getting started.

“It’s really going to change how everybody sees the working of cells and organs,” he said. “This is really the tip of the iceberg.”

The cryo-EM microscope (left) produces 'near-atomic' images by shooting a beam of electrons into a sample instead of visible light. Craig Yoshioka, Ph.D., research assistant professor of biomedical engineering, OHSU School of Medicine looks over a display from a cryo-EM microscope, May 2, 2018 at OHSU. (OHSU/Kristyna Wentz-Graff)

Cryo-EM can provide three-dimensional structural information on biological molecules with near atomic-level resolution detail. This technology has opened the doors for researchers to visualize many new types of biomolecules that have escaped detection by traditional methods (such as membrane proteins and receptors). Membrane proteins represent 50 percent of the market currently targeted by drug developers, and will be an area of specialization at the Pacific Northwest Center for Cryo-EM Center. (Image courtesy Steve Reichow, Ph.D.)

Researchers at OHSU who work with cryo-electron microscopy (left to right): Michael Chapman, Ph.D., Claudia Lopez, Ph.D., Steve Reichow, Ph.D., Eric Gouaux, Ph.D., and Craig Yoshioka, Ph.D. Four more of these powerful scopes will be installed on the OHSU campus, creating the Pacific Northwest Center for Cryo-EM. OHSU, in partnership with the Pacific Northwest National Laboratory has been named one of three new national centers for cryo-electron microscopy. The National Institutes of Health is investing $128 million to establish all three of the centers. (OHSU/Kristyna Wentz-Graff)