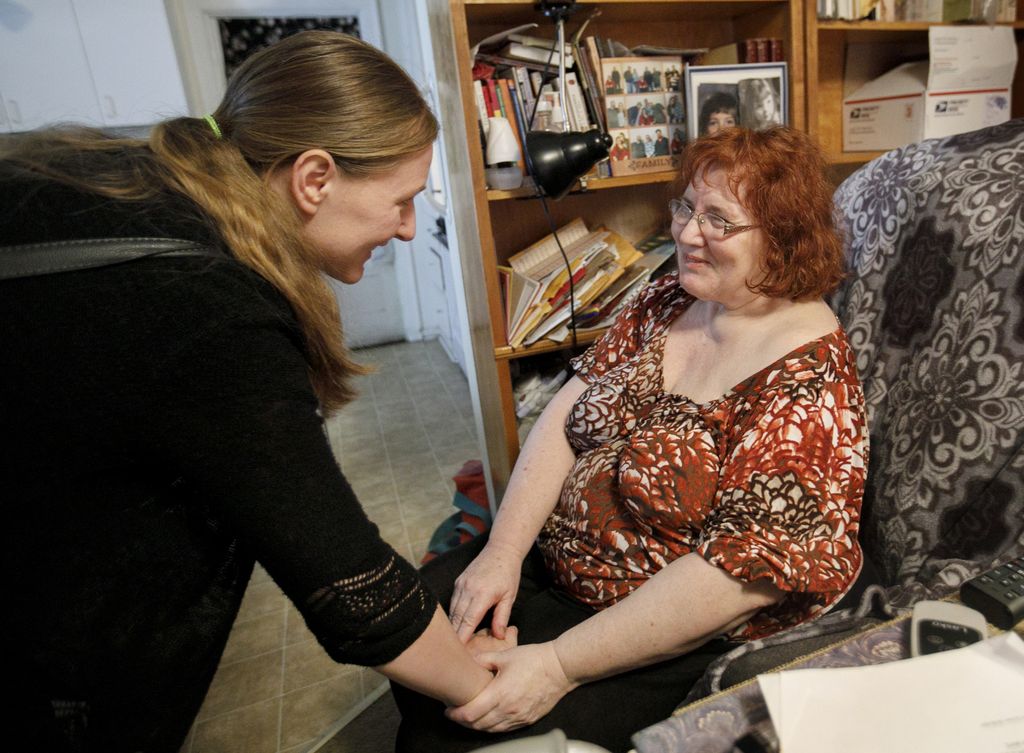 Residents of the Portland-area neighborhood of Rockwood are able to better access health care and other services through a program in which OHSU students work with underrepresented communities.

OHSU officials and its local partners celebrated OHSU’s Interprofessional Care Access Network, also known as I-CAN, opening its sixth location at a July 17 event in Rockwood. At each of its six sites, I-CAN seeks to help local residents overcome health challenges that are exacerbated by low income, homelessness, cultural misunderstandings and other hurdles. Residents of Rockwood, which straddles the border of northeast Portland at the west end of Gresham, experience high rates of poverty and often receive government support for food and health care. 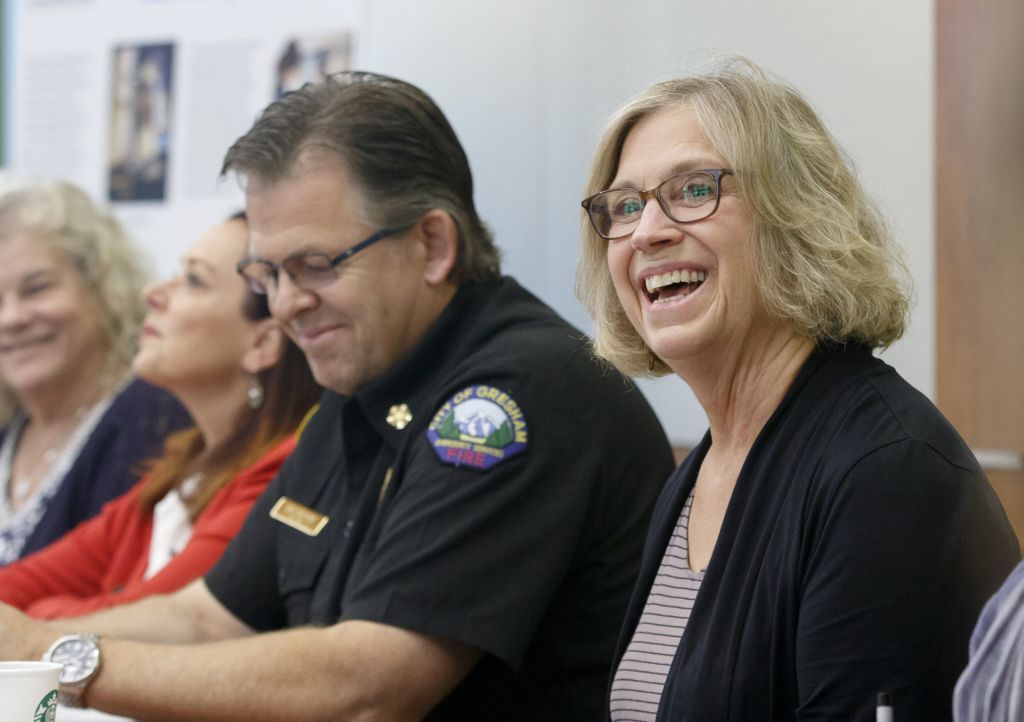 Peggy Wros, Ph.D., R.N., (right) a professor at the OHSU School of Nursing and I-CAN director, speaks at the July 17, 2018 event as OHSU celebrated the opening of its sixth Interprofessional Care Access Network. (OHSU/Kristyna Wentz-Graff)

“OHSU faculty and students have been collaborating with community partners in Gresham for some time, and we’re very excited to make the I-CAN partnership official,” said Peggy Wros, Ph.D., R.N., a professor in the OHSU School of Nursing and I-CAN director. “By working together, we hope to address barriers to health and health care for people living in the Rockwood neighborhood, adding value to existing resources and services.”

More than 150 OHSU students studying nursing, medicine, dentistry, pharmacy and other fields have informally assisted Rockwood area residents since 2013. But limited funding prevented OHSU from making the community an official I-CAN site. This January, OHSU established the community as an I-CAN location thanks to financial support from the OHSU School of Nursing and community-based partnerships with Gresham Fire and Emergency Services, the nonprofit Wallace Medical Concern and Multnomah Education Service District.

Making Rockwood an official I-CAN site means the neighborhood now has an OHSU faculty member-in-residence, Claire McKinley, M.S., R.N. The program can now also increase its reach and impact. I-CAN’s formal presence in Rockwood expands a pilot project OHSU and Gresham Fire started in 2014 called Gresham Community Assistance Response, or CARES, which will continue to employ a site coordinator that’s jointly funded by OHSU’s School of Nursing and the City of Gresham. 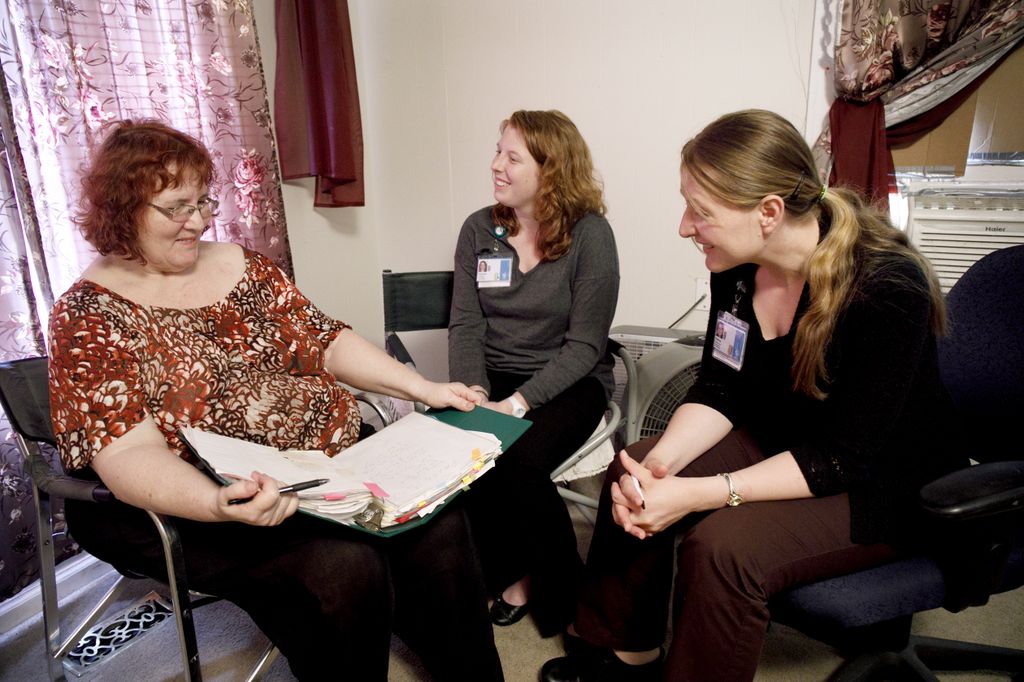 Whenever one of OHSU’s three Rockwood-area partners encounter a client with needs that can’t easily be met by existing agencies, they have an option to refer the case to I-CAN. For example, OHSU received a referral for April Curfman, a Rockwood resident with mobility issues due to Parkinson’s disease, in 2016. OHSU faculty and students initially worked with Gresham fire staff to build her a wheelchair ramp and have continued to help Curfman with her health-related concerns ever since.

“What they do, it really matters,” Curfman said of the program’s faculty and students. “They know we’re not just numbers. We’re people with names and families.”

I-CAN was established in 2013 with the help of a grant from the federal Health Services and Resources Administration. It serves six communities in urban, rural and frontier corners of Oregon: Rockwood, Old Town Portland, Southeast Portland, Monmouth, West Medford and Klamath Falls.

More than 260 clients and 1,000 students have participated in the statewide program. It simultaneously helps meet the needs of clients who can easily slip between the cracks and teaches students how social circumstances such as poverty can affect human health.

An I-CAN participant holds the hand of a student nurse for support at a July 17, 2018 event, where OHSU celebrated the opening of its sixth Interprofessional Care Access Network. The program, now in the Portland area Rockwood neighborhood, seeks to help local residents overcome health challenges exacerbated by income, homelessness, or other issues. (OHSU/Kristyna Wentz-Graff)

Peggy Wros, Ph.D., R.N., (right) a professor at the OHSU School of Nursing and I-CAN director, speaks at the July 17, 2018 event as OHSU celebrated the opening of its sixth Interprofessional Care Access Network. The program, now in the Portland area Rockwood neighborhood, seeks to help local residents overcome health challenges exacerbated by income, homelessness, or other issues. (OHSU/Kristyna Wentz-Graff)

April Curfman visits with two OHSU student nurses visiting her in her Portland area home, July 10, 2018, part of OHSU's Interprofessional Care Access Network, or I-CAN. The program seeks to help people overcome health challenges which are exacerbated by their location, income and other issues. (OHSU)