OHSU has more women in executive leadership positions than ever before

Female executives help lead the charge to fulfill OHSU’s mission to improve the health and well-being of all Oregonians
July 23, 2018 Portland, Oregon 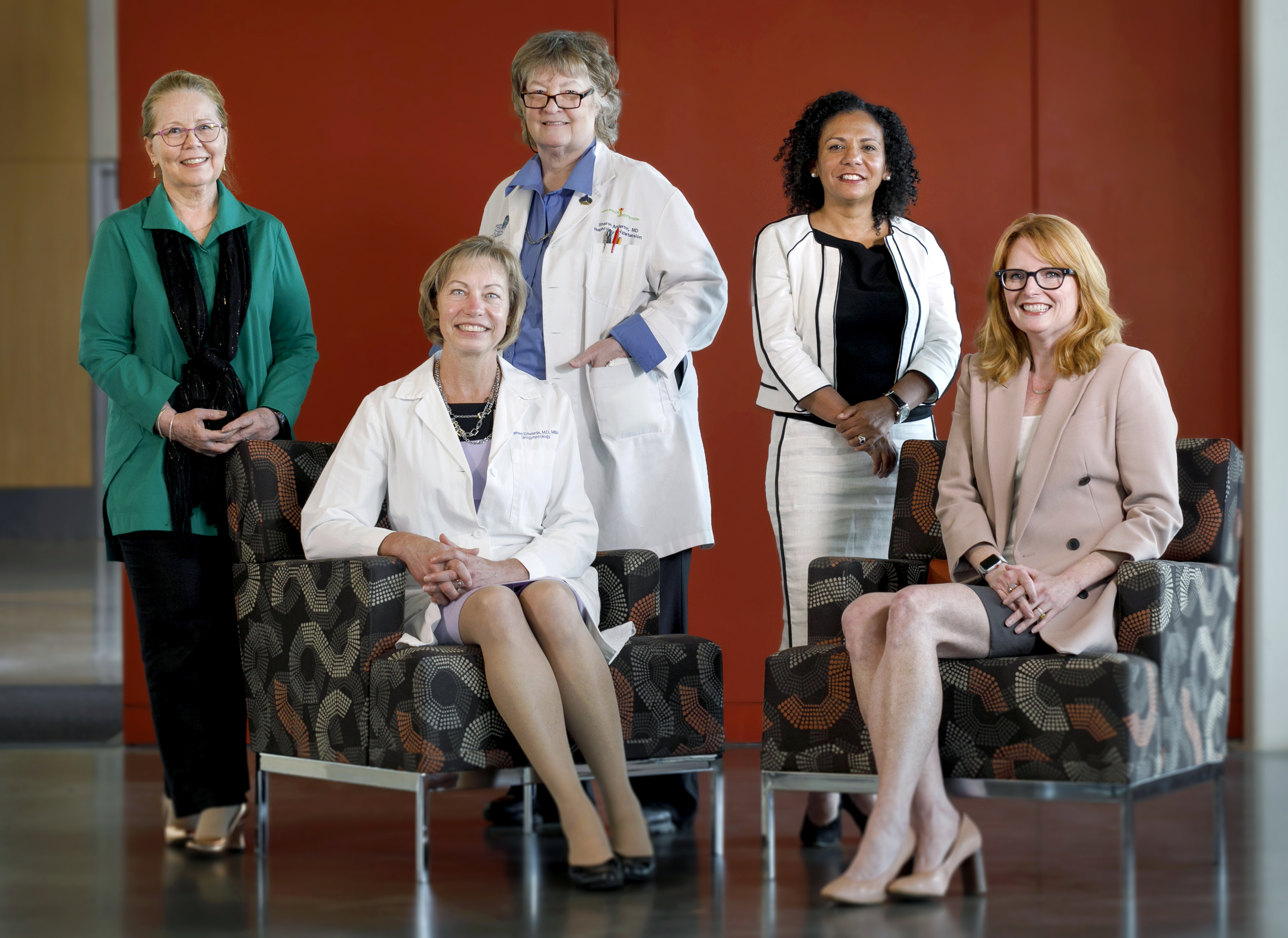 Corporations across the globe have reported increases in performance, better decision-making and innovation, and higher employee satisfaction in recent years. These changes have been linked to an increase in gender diversity and the number of women in key leadership roles.

OHSU is no exception. Marking a key milestone, the state’s only academic health center now has more women in executive leadership roles than ever before. This includes the historically male-occupied positions of chief medical officer and dean of the OHSU School of Medicine.

“We strive to fill every role at OHSU with the best and brightest minds, regardless of race, background or gender identity,” said OHSU president Joe Robertson, M.D., M.B.A. “It just so happens that a whole lot of our best and brightest are women.”

An institutional first that represents the future of health care leadership and innovation, the OHSU School of Medicine Class of 2020 enrolled 93 women, outnumbering their male counterparts by more than 20 percent. This contributes to a 9.6 percent increase in women entering medical school nationwide over the past two years.

However, despite gender parity amongst the student population, the Association of American Medical Colleges continues to record gender disparity as health care professionals work to assume academic rank.

In the U.S., women represent approximately 45 percent of assistant professors - or faculty working toward tenured positions -  yet, only 23 percent hold full professorship.  Further, a mere 16 percent of medical school deans are female.

Helping to bridge this gap, the following five women have recently been named to executive roles on OHSU’s leadership team. 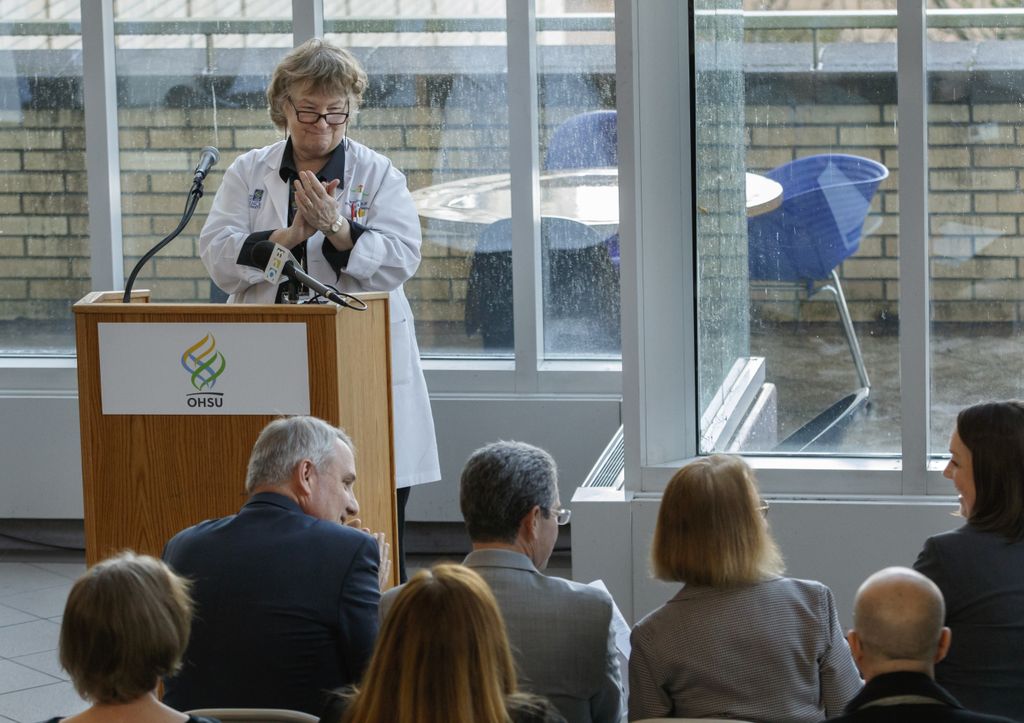 Dr. Sharon Anderson's best career advice: It is OK to not know everything, to be apprehensive, or to struggle. The most important thing is to find and hold on to inspiration. (OHSU/Kristyna Wentz-Graff)

It is never too late to find your passion and chase your dreams, according to Sharon Anderson, M.D.

As a teen, her career goal was clear: Become the Paris correspondent for the New York Times.

Despite earning a college degree in government and politics, her path unexpectedly changed course following a brief hospitalization.

“I took notice of the physicians, residents and medical students, how hard they were working, how interesting their work was and the fact that they seemed to enjoy doing it,” Anderson said. “I had limited knowledge and no personal role models in medicine, but decided the field was the right fit for me.”

Today, she is a nephrologist focusing on the risks, mechanisms and treatment of renal disease, and also serves as only the second female dean in the OHSU School of Medicine’s 130-year history.

As dean, Anderson oversees nearly 2,500 faculty representing 19 clinical departments, seven basic science departments and multiple research centers and institutes. She has held numerous leadership positions for professional societies and organizations including the American Board of Internal Medicine, the Alliance for Academic Internal Medicine and the American College of Physicians. In addition to serving on two Councils of the National Institutes of Health, she was also elected the first woman president of the American Society of Nephrology.

Her passion not only involves the education of future physicians, but also the empowerment of diverse populations – including women – to seek leadership opportunities.

“When we experience the power of multiple and diverse perspectives, the resulting value speaks for itself and we want to replicate it,” she said.

Her best advice to anyone seeking career advancement? It is OK to not know everything, to be apprehensive, or to struggle. The most important thing is to find and hold on to inspiration.

“Stay connected to what inspires you, and you will succeed.” 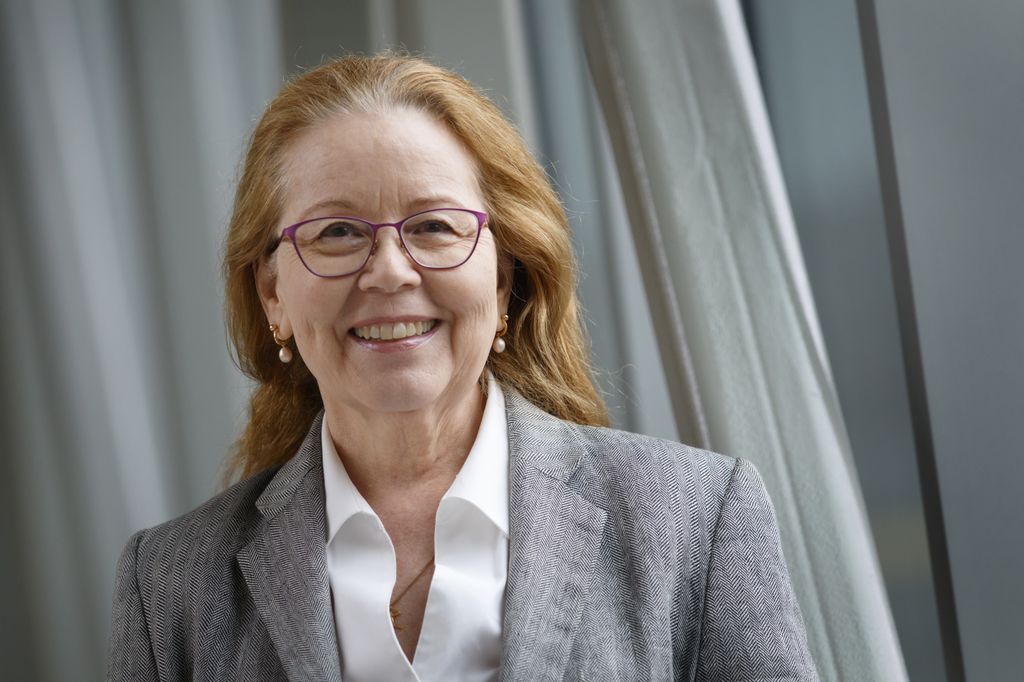 “When a door opens, I encourage women to go through it,” says Elena Andresen, Ph.D. “While apprehension is normal, it shouldn’t keep you from saying yes and asking for opportunity." (OHSU/Kristyna Wentz-Graff)

At age 33, Elena Andresen set out to obtain a Ph.D. in epidemiology.

The daughter of a mechanic, Andresen was encouraged to pursue a higher education. However, despite her classroom success, her career options weren’t apparent.

Based on her general appreciation of math and science, Andresen originally set her sights on the male-dominated field of oceanography. However, recognizing a lack of opportunity for women, she pivoted to social sciences and earned dual degrees in Spanish language and history in 1971.

After obtaining her graduate degree in history from the University of Washington, Andresen worked as a research manager for 10 years. While hands-on data collection and analysis piqued her interest daily, it wasn’t enough. “I began to feel stifled,” she said. “I needed to achieve more.”

With the support of her husband, Andresen overcame her trepidation and returned to the University of Washington to study epidemiology. In 1991, she earned her Ph.D.

Andresen was named executive vice president and provost of OHSU in June 2017. In this role, she oversees the education mission for the schools of Medicine, Nursing, Dentistry, Pharmacy and Public Health, as well as other health care professional programs and initiatives across the institution.

Additionally, as a member of the CDC-funded Oregon Office on Disability and Health at OHSU, she is actively involved in public health research intended to promote the wellness of Oregonians with disabilities. Prior to her appointment as provost, Andresen served as the OODH principal investigator.

“When a door opens, I encourage women to go through it,” she said. “While apprehension is normal, it shouldn’t keep you from saying yes and asking for opportunity.” 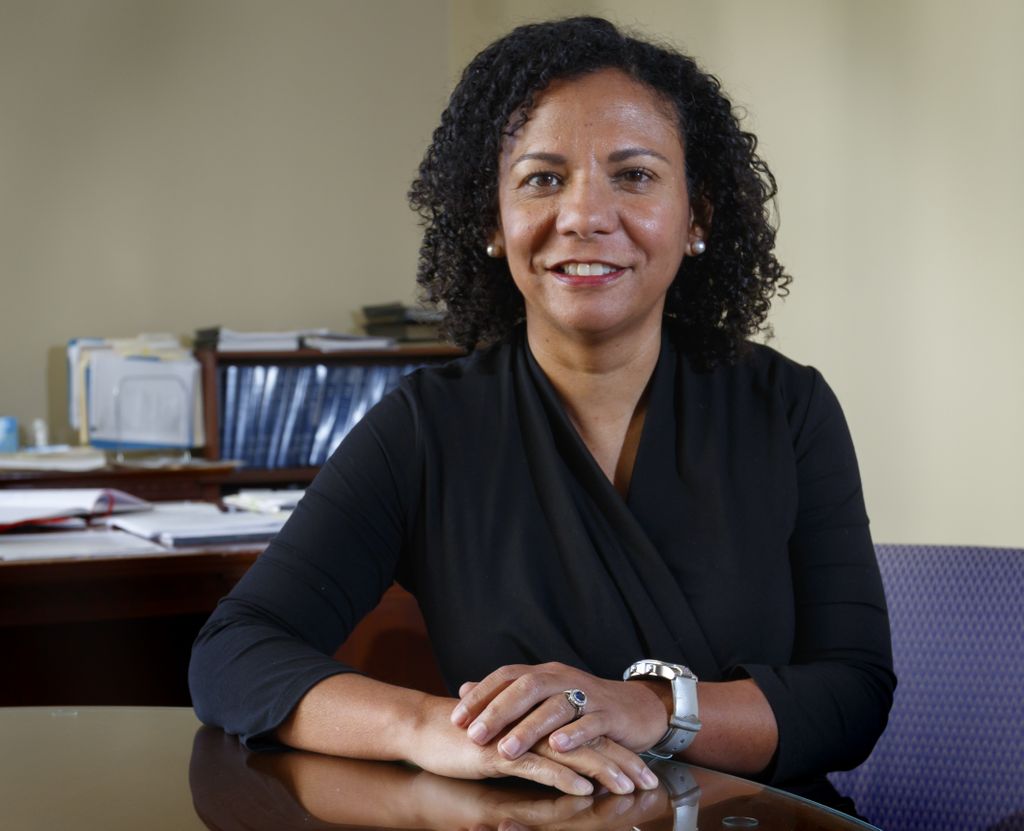 “Different views and voices, whether from women or men, young or old, are important to ensuring that issues have been deeply explored and that solutions found are more likely to be acceptable to disparate stakeholders,” says Alice Cuprill-Comas, Senior Vice President, General Counsel of OHSU. (OHSU/Kristyna Wentz-Graff)

Inspired by her uncle, a well-respected lawyer, Alice Cuprill-Comas decided on her career path at an early age.

With an interest in mission-driven work and making a difference in the community, she joined the OHSU legal team in 2012, and just five years later, was appointed senior vice president and general counsel. In this role, she oversees all of OHSU’s legal affairs including counsel to the OHSU Board of Directors, the OHSU president and the president’s executive leadership team.

In January 2018, Cuprill-Comas was Governor Kate Brown’s choice for president of the Port of Portland Commission.

“Different views and voices, whether from women or men, young or old, are important to ensuring that issues have been deeply explored and that solutions found are more likely to be acceptable to disparate stakeholders,” she said.

And while brains and hard work may be beneficial to a successful career, her advice to young women looking to increase such diversity in the fields of general counsel or health care: Seek out opportunity.

“Challenge yourself to identify the skills you may need for the next step in your career, and look for those opportunities, projects, teams and mentors that can help you gain them,” she continued. 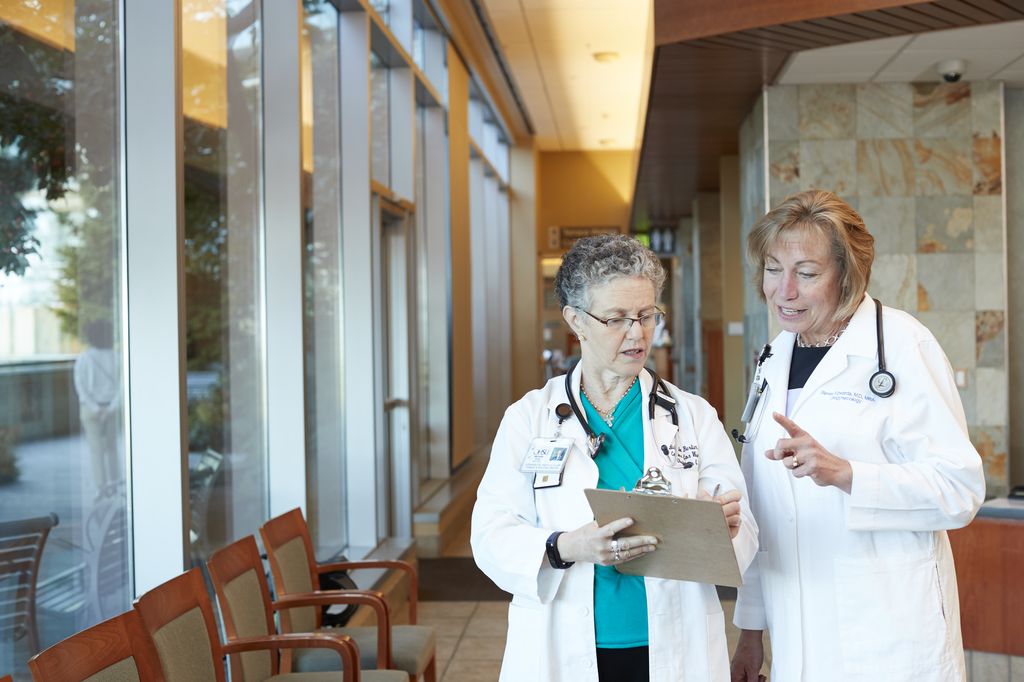 “To me, medicine is an ideal blend of intellectual stimulation and service,” says Renee Edwards, M.D. (right). Earlier this year, Edwards was appointed vice president and chief medical officer of OHSU Healthcare, the first woman to hold the title. (OHSU)

Always sit at the table, not in the back of the room.

This is Renee Edwards, M.D.’s advice to those seeking career advancement and leadership opportunities. And, as it turns out, it is a solid recommendation.

Earlier this year, Edwards was appointed vice president and chief medical officer of OHSU Healthcare. The first woman to hold this title at OHSU, she oversees clinical operations at the hospital, with the goal of ensuring that all patients receive the highest quality care possible.

“To me, medicine is an ideal blend of intellectual stimulation and service,” she said. “I feel privileged to care for patients and am continually humbled by the trust they place in us as health care providers.”

Prior to her role as CMO, Edwards served as co-director of OHSU’s Center for Women’s Health, whereas a urogynecologist, she regularly sees patients. Her advocacy for the importance of understanding, studying and treating the biological differences of men and women in health care continues to fuel her leadership philosophy.

While alike in many ways, there are important things, both biological and behavioral, that make men and women very different, Edwards says.

“These differences, not just in terms of gender, but also across culture, race and belief, should be embraced to create robust leadership teams across any organization, particularly in health care, which impacts an equally diverse group of patients.”

Continuing her mission to expand the definition of leader, Edwards has been accepted as a fellow in the 2018-2019 class of the Hedwig van Ameringen Executive Leadership in Academic Medicine Program for Women. The highly competitive program offers intensive training, networking and mentoring opportunities aimed at expanding the national pool of qualified women candidates for leadership in academic medicine, dentistry, public health and pharmacy. 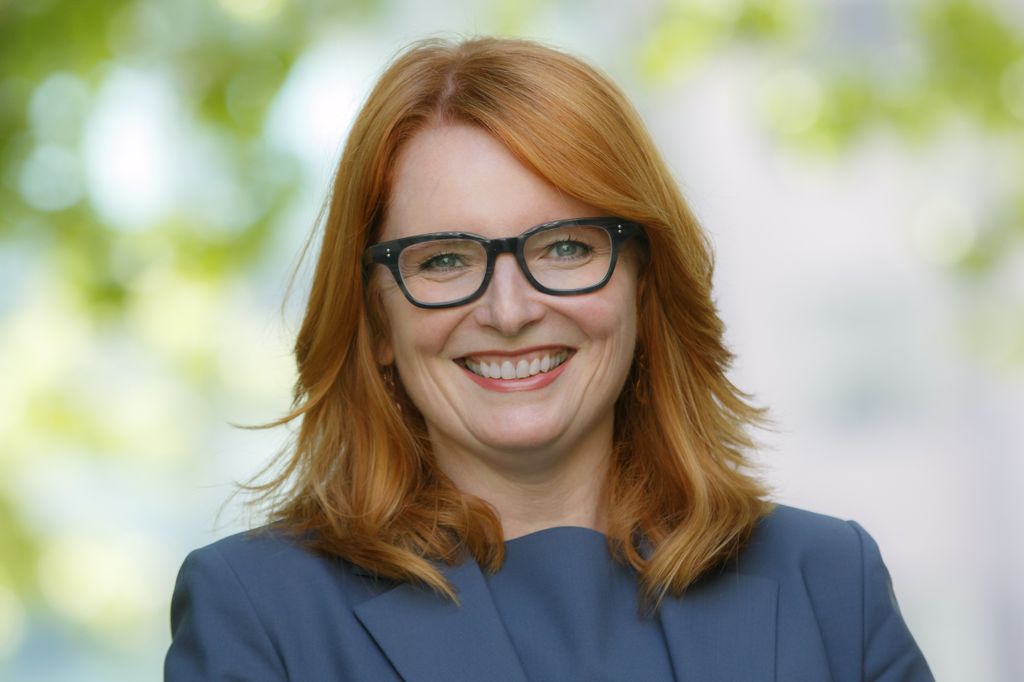 “Varied experiences are imperative to ensuring a well-rounded workforce," says Connie Seeley. "Ignoring the insight of women would eliminate nearly half of those valuable perspectives immediately.” (OHSU/Kristyna Wentz-Graff)

For more than eight years, much of Connie Seeley’s time has been devoted to building committed and capable teams that represent OHSU’s mission of improving the health and well-being of all Oregonians.

At the very core of her approach, she says, is a collective of voices.

“Whether its economics, gender or ethnicity, no one walks through this world in the same way,” she said. “Varied experiences are imperative to ensuring a well-rounded workforce. Ignoring the insight of women would eliminate nearly half of those valuable perspectives immediately.”

Seeley joined OHSU in 2010 as chief of staff, and in 2017, added chief administrative officer to her list of titles. In this joint role, she oversees various OHSU departments, including campus development, human resources, public affairs and campus safety.

Attributing her career growth to the notion of believing in herself, Seeley is passionate about instilling similar confidence in other young women. As a board member of the Center for Women’s Leadership at Portland State University, she actively mentors emerging female leaders – many of whom are first-generation college students just like herself – providing them insight into business processes, as well as access to key civic and legislative leaders. She is hopeful that this work will continue a trajectory of diverse leadership across various industries in the years to come.

While apprehension when seeking leadership opportunity is understandable, Seeley said, “it is important to not talk yourself out of an opportunity before you even know what is possible.”

Her best advice to anyone seeking high-level roles was bestowed upon her early in her career: Get the job first. Then decide if you want to take it.

OHSU employs nearly 16,000 dedicated employees of all genders and backgrounds. Each is important to the academic health center’s mission to improve the health and well-being of all Oregonians. These highly accomplished women represent OHSU women in leadership roles.

Elena Andresen, Ph.D., has been appointed executive vice president and provost of OHSU, Oregon's academic health center. In these roles, Andresen will oversee the education mission for the schools of Medicine, Nursing, Dentistry, Pharmacy and Public Health, as well as other health care professional programs and initiatives. Her appointments are effective June 1, 2017. (OHSU/Kristyna Wentz-Graff)