160 future physicians to start their medical journeys at OHSU 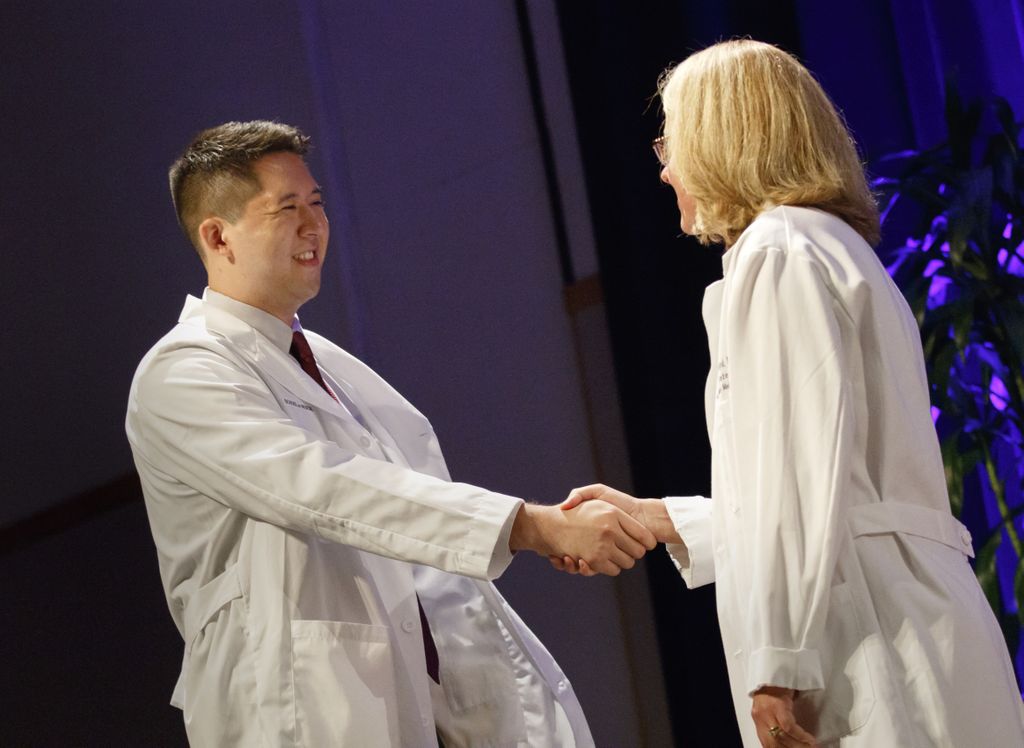 A new group of students will begin their journey toward becoming physicians by symbolically slipping on their white doctor’s coats for the first time at the OHSU School of Medicine’s annual White Coat Ceremony Friday, Aug. 10.

“This ceremony, which includes faculty leaders assisting our new medical students in donning their white coats for the first time, symbolizes not only their transition into medical school but also our commitment to walk this path with them," said Sharon Anderson, M.D., dean, School of Medicine. "Especially as medicine evolves, medical school is becoming less about the all-knowing faculty filling students with the facts of medicine and more about shared learning. I’m excited to celebrate our new students on this special day.”

Of the 160 medical students matriculating this fall:

DETAILS: David Mansoor, M.D., an associate professor of psychiatry in the OHSU School of Medicine, will deliver the annual J.S. Reinschmidt, M.D., Lecture, which provides a special message to students by a guest speaker.

Media who attend will be able to:

Reporters will need tickets to attend the ceremony. Reporters can obtain tickets by contacting Franny White of OHSU Strategic Communications at whitef@ohsu.edu, 503-494-8231 or 971-413-1992 (cell).

While disrupting terrorist networks during his seven tours in the Middle East as an Army Ranger, Edward Ward discovered he wanted to be a physician.

He was serving as an emergency medical technician in Afghanistan when Ward and his squad rushed to rescue a helicopter crew chief who had narrowly survived a mid-air collision and was surrounded by fiery wreckage. Ward was able to see the crew chief again four months later when he went stateside for surgical training.

“He broke down in tears and thanked us,” Ward said of the crew chief. “He was about to be released from the hospital and was perfectly fine. It’s a very mind-blowing experience to have that kind of impact on someone.”

His decision to attend medical school was also inspired by his experiences helping people in rural villages during his various military tours and growing up with a cousin who had cystic fibrosis.

Ward, who grew up in Williamstown, New Jersey, is attending the OHSU School of Medicine with the goal of becoming an emergency or trauma physician. The GI Bill enabled him to earn a bachelor’s degree in neuroscience from Columbia University, making him the second in his family to attend college. Now, he’ll be the first to attend graduate school.

When asked why he’s excited about becoming a physician, Ward said: “I get to live my dream of giving everything that I have to provide other people with an opportunity to live long, fulfilling lives.”

Raised by a Mexican immigrant mother and a Corvallis-born father in a small community outside of Portland, Cassandra Kasten-Arias saw her Latino family and friends struggle to navigate the health system.

“Many of them faced language, cultural and financial barriers” said Kasten-Arias, who often served as an unofficial interpreter at medical appointments for family and friends while growing up in the unincorporated Washington County community of Aloha.

“My undocumented family members lacked health insurance and couldn’t afford to see the doctor regularly,” she added. “Those who did have insurance, but did not speak English fluently, like my mother, felt uncomfortable during their appointments due to language barriers.”

She further saw the need to help immigrants better access health care as a student of biology and Spanish at the University of Portland. She participated in service-learning opportunities at the U.S.-Mexico border and in the agricultural town of Yakima, Washington, and also volunteered as a Spanish medical interpreter at her church’s monthly clinic and the Southwest Community Health Center in Hillsboro.

Kasten-Arias is interested in becoming a primary care physician who cares for marginalized communities such as immigrants and those with limited English proficiency. She’s receiving a full scholarship through OHSU’s Scholars for a Healthy Oregon Initiative, which enables students to address health care disparity in the state. Kasten-Arias plans to stay in Oregon and serve underrepresented patients here.

“I’m really happy to be able to serve Oregon,” she said. “This is my dream – to help underserved and marginalized communities.”

Students take the Oath of Geneva at the OHSU School of Medicine's Class of 2021 White Coat Ceremony held August 11, 2017 at the Oregon Convention Center. (OHSU/Kristyna Wentz-Graff)

Class of 2020 largest, most diverse in School of Medicine history