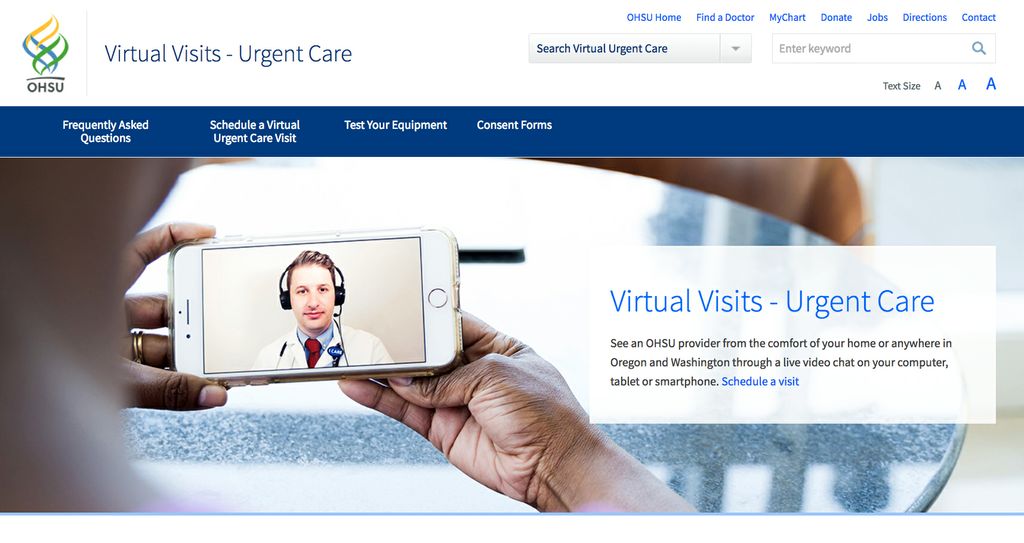 Parents throughout the Portland metro area are understandably rattled by the measles outbreak in Clark County – especially at the first sign of a rash.

Taking a sick kid into a clinic, however, is the last thing anyone should do during a measles outbreak for two main reasons:

When 5-year-old Henry William Hurst of southeast Portland was feeling under the weather earlier this month with what appeared to be telltale measles-like spots, his parents did the right thing: They picked up the phone.

Within minutes, they were connected by a video chat to OHSU’s Virtual Visit Urgent Care service.

“We didn’t want to go into a hospital, where people are compromised already, and expose other patients to something that might be dangerous,” said Michael Hurst, Henry’s dad. “We did it out of concern for others.”

Low-cost and convenient for patients, and efficient for emergency medicine clinicians

The service allows patients to immediately connect with a health care provider, via video chat, from a mobile device or computer. It’s especially important during a measles epidemic, but the service is useful for a slew of other maladies traditionally handled in an urgent care clinic or emergency room: Diagnosing and treating everything from allergies and sore throats, to strains and sprains.

The service is low-cost and convenient for patients, and it frees up time to focus on the most serious cases for clinicians in emergency rooms.

It also has a public health benefit for those with a weakened immune system or a contagious virus.

In a suspected measles case, the provider can view signs of rash and provide a diagnosis and treatment plan. The service also can coordinate with public health agencies to provide additional treatment and testing, including a measles test that can be performed in the home. The cost of the virtual visit is $49, which is often covered by insurance.

“This is a way that we can respond to the concerns of individuals while also protecting public health,” said Richard T. Clark, M.D., medical director of the OHSU Virtual Urgent Care service and assistant professor of emergency medicine in the OHSU School of Medicine.

In Henry’s case, an OHSU clinician assessed Henry’s condition without unnecessarily exposing him or others to a contagious virus.

It turned out that Henry didn’t have measles. Although the rash could have been a viral cold or an allergy, Henry’s parents are grateful they were able to have their son checked without having to go into a clinic.

“We held the phone up to his chest, and the nurse practitioner was able to see it and give us a reassuring diagnosis about his condition,” Michael said. “We were happy it was nothing big and were able to find out without causing risk to anyone.”