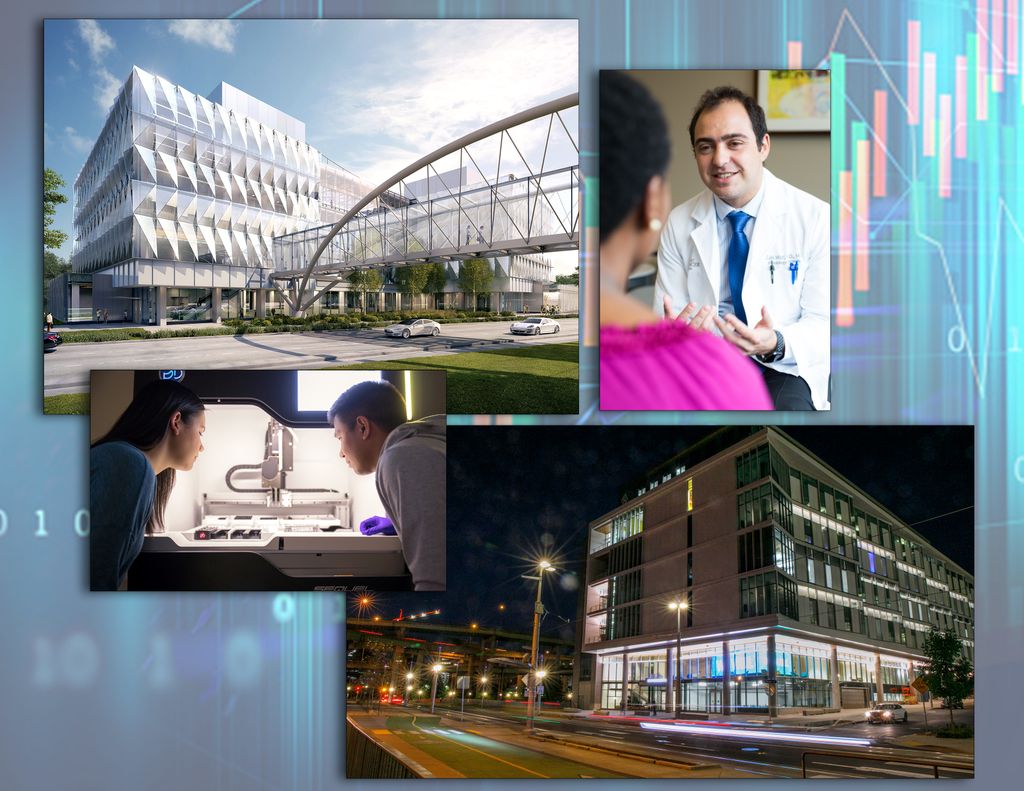 The collaboration between OHSU and UO will develop large data analysis approaches to quickly identify cell abnormalities that lead to cancer and other diseases. (OHSU)

OHSU and the University of Oregon announced plans today for a joint center in biomedical data science, empowering researchers at both institutions to attack cancer with big data.

The partnership combines efforts at the UO’s Phil and Penny Knight Campus for Accelerating Scientific Impact with those at the OHSU Knight Cancer Institute to detect and fight deadly forms of cancer and other diseases in a jointly operated center initially involving as many as 20 researchers and their teams. The new research center will develop new approaches to quickly and efficiently analyze large groupings of data, allowing researchers to “listen in” on cell development for early detection of lethal diseases.

“Breakthroughs in early detection and precision medicine require expertise in a variety of areas such as engineering, bioinformatics and genomics,” said Brian Druker, M.D., director of the OHSU Knight Cancer Institute. “By leveraging each institution’s strengths, we can maximize our combined research efforts, and ultimately, make the greatest impact for patients.”

The initiative, along with UO graduate programs in areas such as computer science, math, life sciences, ethics and soon-to-be bioengineering, will combine with OHSU’s large-scale efforts in precision medicine to identify more quickly cell abnormalities that lead to cancer and other diseases. Earlier detection of lethal cancers represents the greatest opportunity to boost survival rates, and has been an area of priority for the cancer institute.

“This Knight-to-Knight partnership is one of the many ways we’re putting Oregon on the national map in how we translate discovery into impact,” said Robert Guldberg, Ph.D., vice president and Robert and Leona DeArmond Executive Director of the UO’s Knight Campus. “We are creating this unique inter-institutional center recognizing that conquering complex diseases like cancer requires a team effort and effective integration of laboratory science with big data analytics.”

Druker says this key partnership will give the Knight Cancer Institute, as well as OHSU more broadly, a critical opportunity to engage the UO’s Presidential Initiative in Data Science and initiatives to build capacity in machine learning, computational genomics and imaging. He says the tools and expertise emerging from this partnership can be applied to research areas at both institutions beyond oncology.

The agreement calls for a director to report jointly to OHSU and UO. Between the two institutions, the center is expected to hire more than eight new faculty members, bringing together existing faculty that could comprise a group greater than 20 in total.  This partnership will attract new students and postdoctoral fellows to both institutions to work on pressing biomedical problems that can be explored and solved using computational approaches.

Leaders from both institutions say the collaboration reflects the vision of Penny and Phil Knight, lead donors for both the UO’s Knight Campus and the OHSU Knight Cancer Institute.

In 2013, the Knights issued a surprise pledge of $500 million to the cancer institute, contingent upon OHSU completing a $500 million fundraising campaign to match it. Donors from around the world rose to the challenge, and the campaign was successfully completed in June 2015.

“This collaboration marks a significant milestone for the state of Oregon,” said OHSU President Danny Jacobs, M.D., M.P.H., F.A.C.S. “The partnership between our two universities will honor the generous gifts from Phil and Penny Knight, and generous gifts made from donors all over the world, who believe in our mission to end cancer as we know it.”

The UO’s Knight Campus, announced in 2016, is made possible by a $500 million lead gift from the Knights. In addition to the gift, $70 million in state bonds support the $1 billion initiative aimed at integrating research, training, and entrepreneurship into a single, nimble, interdisciplinary enterprise. Its first building is slated to open next year.

This “Knight-to-Knight” partnership stems from a larger collaboration between the two institutions, dating back to 2017.  With an effort to boost research collaboration, 10 OHSU-UO research teams examining everything from health disparities to bio-inspired fractal implants were awarded funding to jump-start research projects as part of the program. These projects build on the respective strengths of each institution’s researchers and unites them in a common goal toward life-changing breakthroughs that will resonate across Oregon and beyond.

“This collaboration nicely kicks off our new relationship with UO around data science,” said Peter Barr-Gillespie, Ph.D., OHSU chief research officer and executive vice president. “This research effort should lead to exciting discoveries around how normal cells work and how cancer cells differ from them. Moreover, these ongoing initiatives with UO will continue to strengthen our commitment to the state of Oregon.”