Technique could help diagnose, rectify a genetic defect with gene-editing tools such as CRISPR
By Erik Robinson August 01, 2019 Portland, Oregon 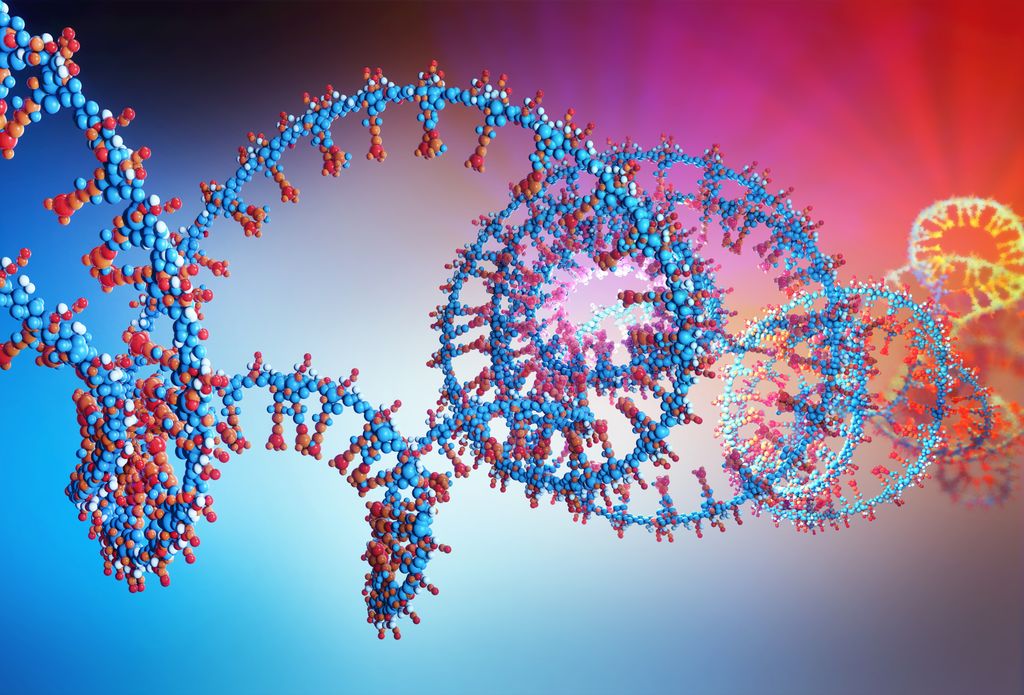 Researchers looked at tens of thousands of mice cells, taken from mice with known defects in sperm production. The cells were sorted based on differences in the genes expressed in the RNA (a chain of the RNA is depicted here) of individual cells. (Getty Images)

Scientists have devised a new computational method that reveals genetic patterns in the massive jumble of individual cells in the body.

The discovery, published in the journal eLife, will be useful in discerning patterns of gene expression across many kinds of disease, including cancer. Scientists worked out the formulation by testing tissue taken from the testes of mice. Results in hand, they’re already applying the same analysis to biopsies taken from men with unexplained infertility.

“There have been very few studies that attempt to find the cause of any disease by comparing single-cell expression measurements from a patient to those of a healthy control. We wanted to demonstrate that we could make sense of this kind of data and pinpoint a patient’s specific defects in unexplained infertility,” said co-senior author Donald Conrad, Ph.D., associate professor and chief of the Division of Genetics in the Oregon National Primate Research Center at Oregon Health & Science University.

Simon Myers, Ph.D., of the University of Oxford, also is a senior co-author.

Conrad said he expects the new method will advance the field of precision medicine, where individualized treatment can be applied to the specific nuance of each patient’s genetic readout.

The scientists made the breakthrough by applying a method recently developed at the University of Oxford to gene expression data from the massive trove of individual cells comprising even minuscule tissue biopsies. The method is known as sparse decomposition of arrays, or SDA.

“Rather than clustering groups of cells, SDA identifies components comprising groups of genes that co-vary in expression,” the authors write.

The new study applied the method to 57,600 individual cells taken from the testes of five lines of mice: Four that carry known genetic mutations causing defects in sperm production and one with no sign of genetic infertility. Researchers wanted to see whether it was possible to sort this massive dataset based on the variation in physiological traits resulting from differences in the genes expressed in the RNA, or ribonucleic acid, of individual cells.

Researchers found they were able to cut through the statistical noise and sort many thousands of cells into 46 genetic groups.

“It’s a data-reduction method that allows us to identify sets of genes whose activity goes up and down over subsets of cells,” Conrad said. “What we’re really doing is building a dictionary that describes how genes change at a single-cell level.”

The work will immediately apply to male infertility.

Infertility affects an estimated 0.5% to 1% of the male population worldwide. Current measures to treat male infertility involve focus on managing defects in the sperm itself, including through in vitro fertilization. However, those techniques don’t work in all cases.

“We’re talking about the problem where you don’t make sperm to begin with,” Conrad said.

This new technique could open new opportunities to diagnose a specific genetic defect and then potentially rectify it with new gene-editing tools such as CRISPR. Identification of a specific cause would be a vast improvement over the current state of the art in diagnosing male infertility, which amounts to a descriptive analysis of testicular tissue biopsies.

“The opportunity provided by CRISPR, coupled to this kind of diagnosis, is really a match made in heaven,” Conrad said.