Dental fillings to get makeover with $7.4 million grant 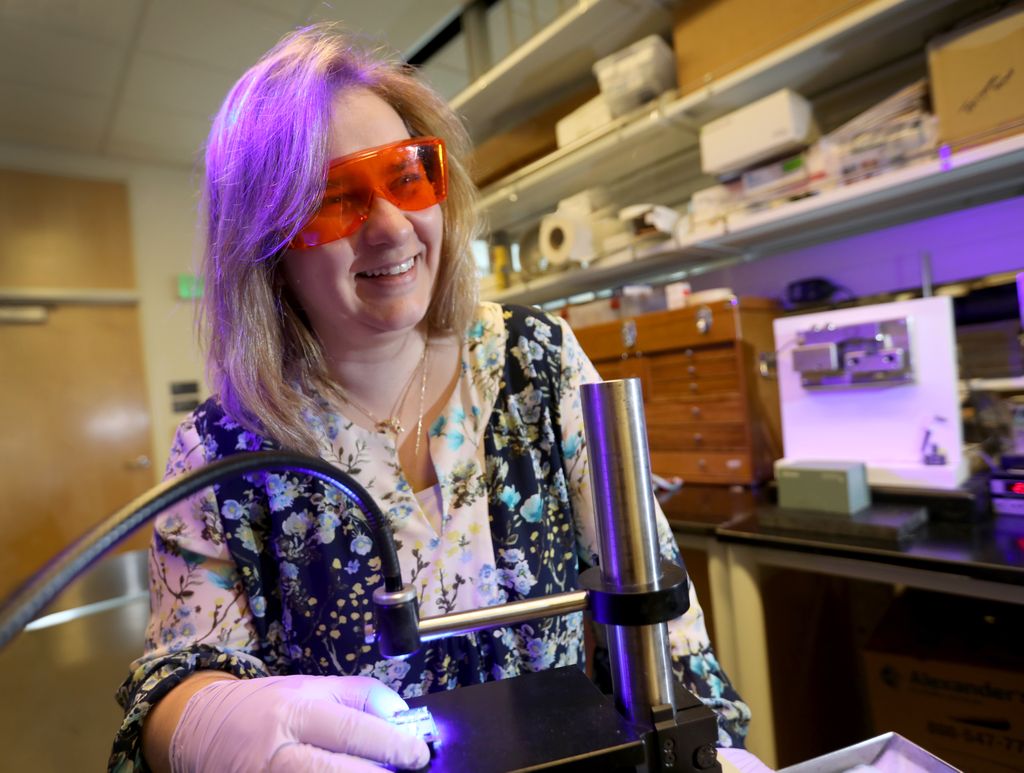 Carmem Pfeifer, D.D.S., Ph.D., associate professor of biomaterials and biomechanics in the OHSU School of Dentistry, is developing a filling material that is two times more resistant to breakage than standard fillings. (OHSU/Kristyna Wentz-Graff)

Dental fillings could last forever -- if Carmem Pfeifer, D.D.S., Ph.D., has her way.

Pfeifer has earned a $7.4 million, eight-year grant from the National Institutes of Health to develop materials for permanent dental fillings that won’t wear down over time -- today’s average filling lasts about seven to 10 years.

“The ultimate goal is to not have to replace fillings,” said Pfeifer, an associate professor of biomaterials and biomechanics in the OHSU School of Dentistry.

To make long-lasting dental materials, she will experiment with durable, long-chain molecules called polymers. Pfeifer also plans to use antimicrobial additives that are specific to cavity-causing bacteria. Antimicrobial materials have been studied for dental fillings before, but these materials previously have been designed to fight a broad spectrum of bacteria, which can lead to antibacterial resistance.

This new grant builds on years of dental material research for Pfeifer. This spring, she published research describing a new dental filling material that is expected to last twice as long and a dental adhesive that’s 30 percent stronger than standard materials and adhesives.

“They crack under the pressure of chewing, or have gaps form between the filling and the tooth, which allow bacteria to seep in and a new cavity to form,” Pfeifer said. “Every time this happens, the tooth under the restorations becomes weaker and weaker, and what starts as a small cavity may end up with root canal damage, a lost tooth or even life-threatening infections.”

Permanent dental fillings would have come in handy for Pfeifer in July. She had a filling crack and fall out just one year after she received it. The filling failed even though she’s treated by a skilled dentist, and the materials that were used were of good quality.

“I was laughing out loud,” Pfeifer recalled. “I thought, ‘This is ironic, this is what I do.’”

The grant, called a Sustaining Outstanding Achievement in Research (SOAR) Award, is in addition to another grant for nearly $500,000 that she earned this spring, bringing her total current NIH funding to about $7.9 million. SOAR awards are issued by the NIH’s National Institute of Dental and Craniofacial Research and provide up to eight years of grant support to allow mid-career investigators with outstanding records of productivity to have stable funding to pursue potentially transformative research programs.

Pfeifer is the second OHSU researcher recently to receive a SOAR award. Justin Merritt, Ph.D., received last year a $7.8 million award to study the roles of microbial ecology and genetics in the oral microbiome.

Previous Story OHSU M.D. Class of 2023 dons their white coats, 'ushering in a ‘lifetime of public service’ Next Story Not all plants are good for you

Carmem Pfeifer, D.D.S., Ph.D., associate professor of restorative dentistry (biomaterials and biomechanics) in the OHSU School of Dentistry, is developing a filling material that is two times more resistant to breakage than standard fillings. (OHSU/Kristyna Wentz-Graff)