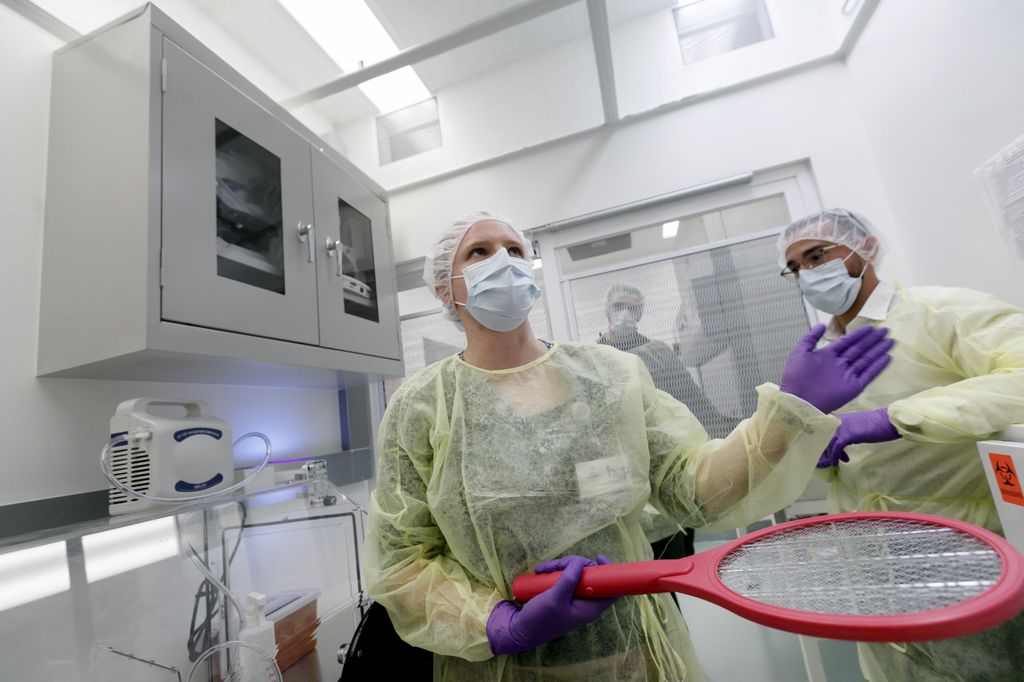 Being in a small room with thousands of mosquitoes sounds like a nightmare to most people.

But for Oregon Health & Science University scientist Brandon Wilder, Ph.D., it’s another day at the office. And his day job is about to include far more of the mosquito’s tell-tale bzzz.

Wilder is the lead researcher at a new insectary at the OHSU Vaccine and Gene Therapy Institute in Beaverton, Oregon, where he and colleagues will raise up to 200,000 mosquitoes annually for malaria research. The small, specialized facility includes three secure, screened-off areas to safely raise mosquitoes in support of the search for an effective malaria vaccine.

“When I go camping, I just can’t stand being in a mosquito-ridden area,” admits Wilder, an assistant professor at OHSU Vaccine and Gene Therapy Institute and the OHSU Oregon National Primate Research Center. “But when I’m in the insectary, I feel different. Mosquitoes are elegant, actually. Inside, I want them to survive. I’ve built them a little room and treat them with more care and love than you would a typical mosquito.”

A global disease that threatens millions

While he respectfully raises mosquitoes for research, Wilder is keenly aware the tiny insect delivers global pain and suffering by spreading the debilitating disease malaria. He studies how the malaria-causing Plasmodium parasite is transmitted to humans through mosquito bites. Wilder specializes in how the parasite first replicates in the human liver before entering the blood stream, where it causes fever, chills, headaches, nausea, body aches and general weakness. Unfortunately, current malaria vaccine candidates haven’t proved to be long-lasting or highly effective against malaria, prompting the need for further research.

Worldwide, more than 200 million new cases of the disease are reported each year, and a child dies every two minutes from malaria. More than 90% of the world’s malaria cases are in Africa. Malaria was eradicated in the United States in 1951, but it continues to haunt Americans when they travel overseas. It is also a leading threat to U.S. armed forces.

The 10-by-18-foot insectary officially opened for business Sept. 9, when it became home to 1,600 mosquitoes that that were delivered from Seattle. He and his colleagues also are breeding a new batch of mosquitoes with a goal of raising at least 12,000 insects by the end of this year. As OHSU’s malaria research advances, as many as 200,000 total mosquitoes could eventually reside there each year. 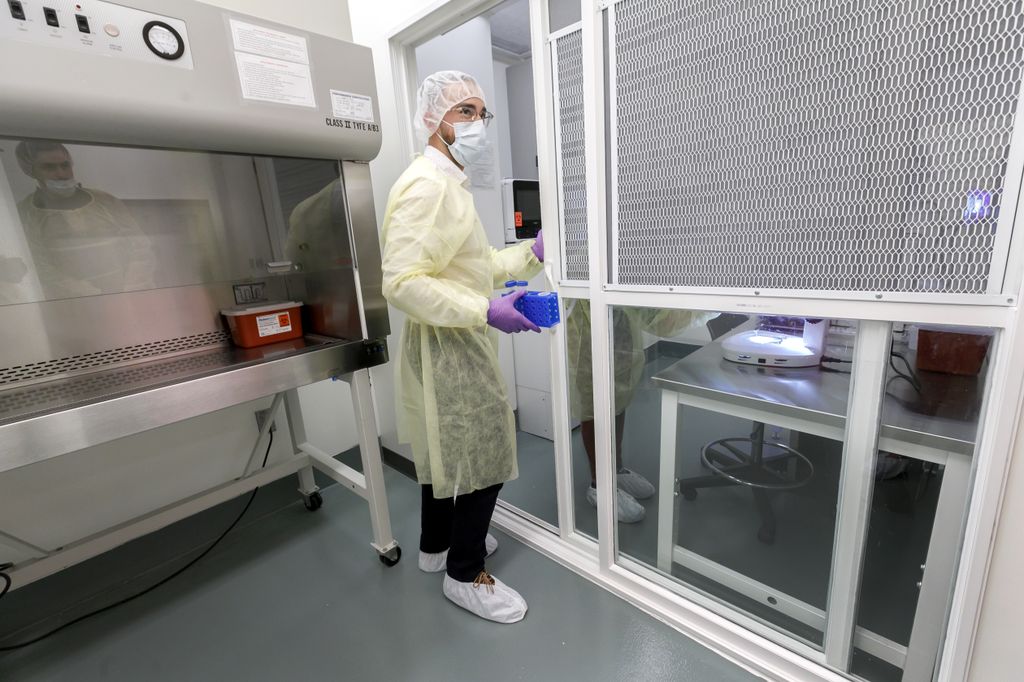 Wilder closes the reinforced screen door leading to the interior barrier room, where mosquitoes infected with malaria are kept in climate-controlled incubators inside. (OHSU/Kristyna Wentz-Graff)

Located in the basement of a research building, the facility has three areas, all of which are separated by safety doors. Scientists first enter a small area called an ante-room, which is largely empty and separates the facility from the outside world. Researchers then pass into the main area, where rodents and non-flying larvae and pupae mosquitos will be kept for malaria research.

Through a reinforced screen door is the interior barrier room, where mosquitoes infected with malaria are kept in climate-controlled incubators inside multiple screened barriers. The insects are kept at 78.8 degrees Fahrenheit and at 75% humidity, mimicking the mosquito’s native environment.

The facility is carefully designed to prevent mosquitoes from escaping. But local residents need not worry about such an unlikely event. Wilder raises an African species of the Anopheles mosquito that can’t survive in Oregon’s temperate climate. Only specially trained OHSU staff are allowed to enter.

A room in an existing research building was retrofitted for the insectary, which cost about $100,000 to prepare and was funded by OHSU.

The insectary is OHSU’s first, though they are fairly common in malaria research circles. OHSU previously ordered mosquitoes from partnering institutions. Having its own insectary will save OHSU from the logistical challenges of having mosquitos securely shipped across the country. 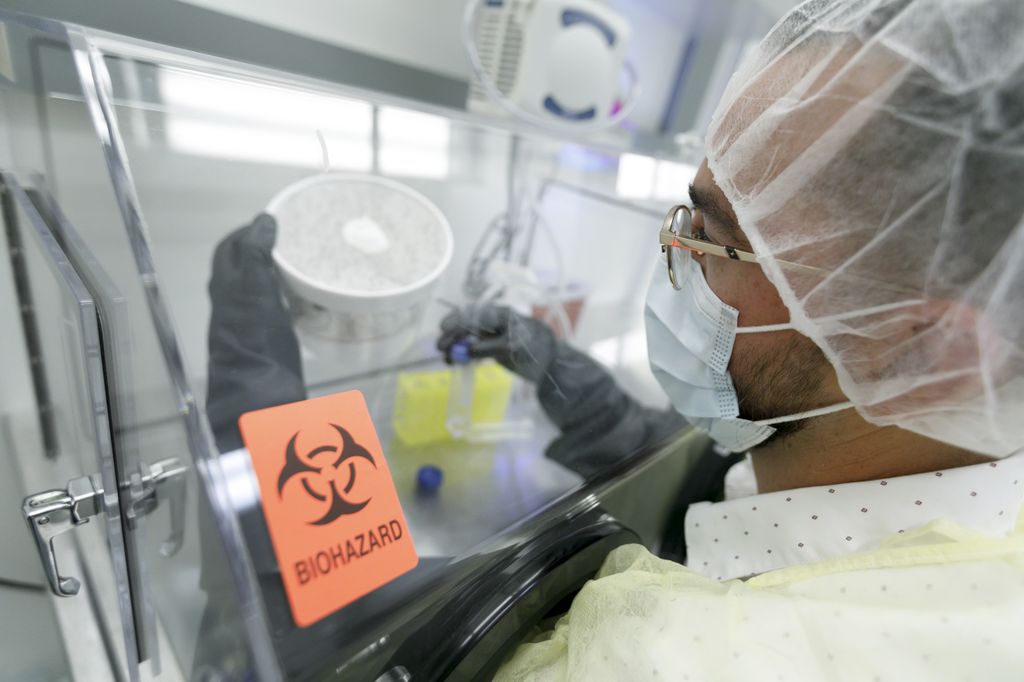 Wilder securely removes some mosquitoes from a container for examination. As OHSU’s malaria research advances, as many as 200,000 total mosquitoes could eventually reside in the lab each year. (OHSU/Kristyna Wentz-Graff)

It will also enable OHSU to advance its malaria research, which currently includes a cytomegalovirus-based vaccine being developed by Klaus Früh, Ph.D., and a drug that prevents and treats malaria infection and is being developed by Michael Riscoe, Ph.D. Früh works at the Vaccine and Gene Therapy Institute and is a professor of molecular and cellular biosciences in the OHSU School of Medicine, while Riscoe is a professor of molecular microbiology and immunology in the OHSU School of Medicine and has a joint appointment with the Portland VA.

Wilder joined OHSU in 2018 after working six years at the Center for Infectious Disease Research in Seattle. He splits his time between OHSU and Peru, where he also conducts malaria research for the U.S. Navy.

Brandon Wilder, Ph.D., studies and African species of the Anopheles mosquito that can’t survive in Oregon’s temperate climate. His research utilizes these mosquitoes in a carefully controlled research space created at the OHSU Vaccine and Gene Therapy Institute will aid in the search for new malaria drugs. (OHSU/Kristyna Wentz-Graff)