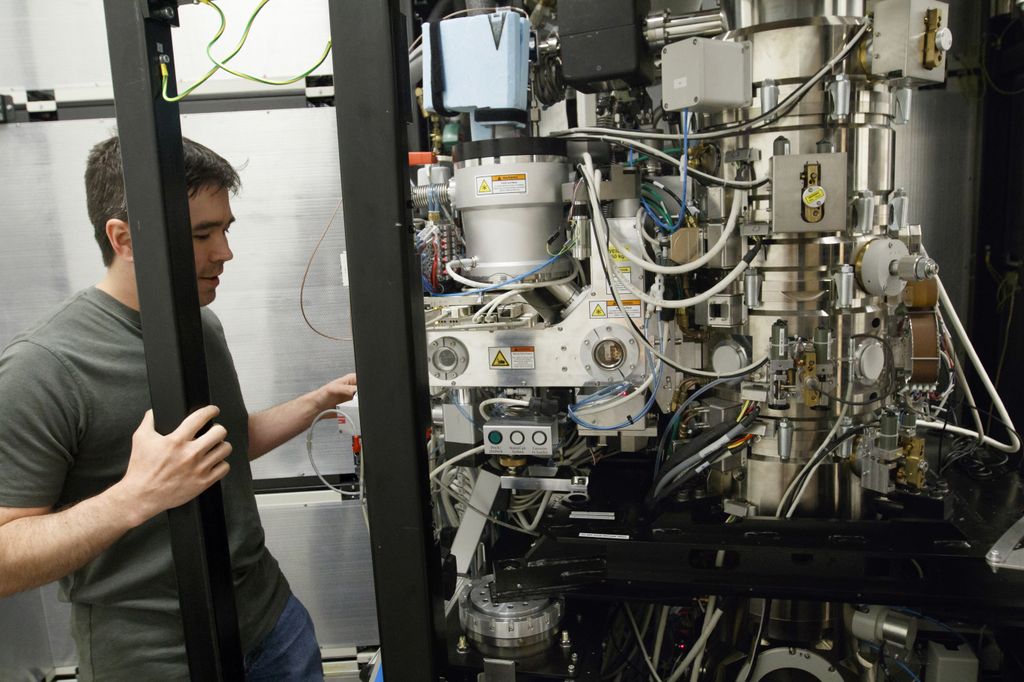 Cryo-EM microscopes such as the one Craig Yoshioka, Ph.D., is looking into, help scientists visualize biological molecules at an atomic scale. Using an NIH grant, the Pacific Northwest Cryo-EM Center will acquire a Krios 300-kiloelectron volt microscope along with three other direct electron detection cameras. (OHSU/Kristyna Wentz-Graff)

A new center at Oregon Health & Science University has received a $5.9 million award from the National Institutes of Health to boost scientists’ ability to view molecules at near-atomic scale.

The Pacific Northwest Cryo-EM Center, or PNCC, is one of three NIH-designated national centers established in May 2018. The center, a collaboration between OHSU and the Pacific Northwest National Laboratory, provides technology and training for an imaging technique that is revolutionizing structural biology.

Center researchers will use the new award to acquire a Krios 300-kiloelectron volt microscope along with three additional direct electron detection cameras.

Housed in the basement of the OHSU Robertson Collaborative Life Sciences Building on Portland’s South Waterfront, the center will then include a total of four of the big Krios scopes – each roughly the size of a jumbo phone booth. The scopes are situated atop special pads designed to eliminate so much as the faint vibration of boat propellers in the nearby Willamette River.

The technology enables scientists to visualize biological molecules at an atomic scale. By revealing proteins and molecules in such breathtaking detail, scientists are unlocking life-science quandaries ranging the gamut from Alzheimer’s disease to the Zika virus.

The new award now will bring state-of-the-art upgrades to a center that’s already at the leading edge.

“It means the center will be at the very forefront of current technological capabilities,” said Eric Gouaux, Ph.D., principal investigator for the center, senior scientist in the OHSU Vollum Institute and investigator with the Howard Hughes Medical Institute. “We’ll be able to lead the country in applying this technology to really important biomedical problems. Portland and OHSU are at the forefront, along with the other centers at Stanford University and the New York Structural Biology Center.”

At the same time, OHSU will invest in a new microscope, a Glacios, to enable scientists at OHSU and Portland State University to carry out preliminary screening studies of important samples before moving on to near-atomic resolution with one of the four big Krios scopes.

“We’ve been using the Krios for screening, which is a little like using a Ferrari to go to the grocery store,” Gouaux said.

In effect, the Glacios scope will free up time on the bigger cryo-EM scopes for scientists from OHSU and around the country who are vying for valuable time. Both the Glacios and Krios are manufactured by Thermo Fisher Scientific.

In addition, the NIH award will allow the center to fit three new direct-electron detection cameras to the Krios scopes. The new cameras enhance the scopes’ capabilities.

“It turns out that these instruments are like a really sophisticated camera you might use for photography at home,” Gouaux said. “One can outfit a basic camera body with all kinds of different lenses and other features that enhance the performance of the camera. These cameras have been optimized for very sensitively and rapidly capturing these electron-based images.”

The cryo-EM microscope (left) produces 'near-atomic' images by shooting a beam of electrons into a sample instead of visible light. Craig Yoshioka, Ph.D., research assistant professor of biomedical engineering, OHSU School of Medicine looks over a display from a cryo-EM microscope, May 2, 2018 at OHSU. (OHSU/Kristyna Wentz-Graff)

Cryo-EM can provide three-dimensional structural information on biological molecules with near atomic-level resolution detail. This technology has opened the doors for researchers to visualize many new types of biomolecules that have escaped detection by traditional methods (such as membrane proteins and receptors). Membrane proteins represent 50 percent of the market currently targeted by drug developers, and will be an area of specialization at the Pacific Northwest Center for Cryo-EM Center. (Image courtesy Steve Reichow, Ph.D.)