Discovery in monkeys could lead to treatment for blindness causing syndrome 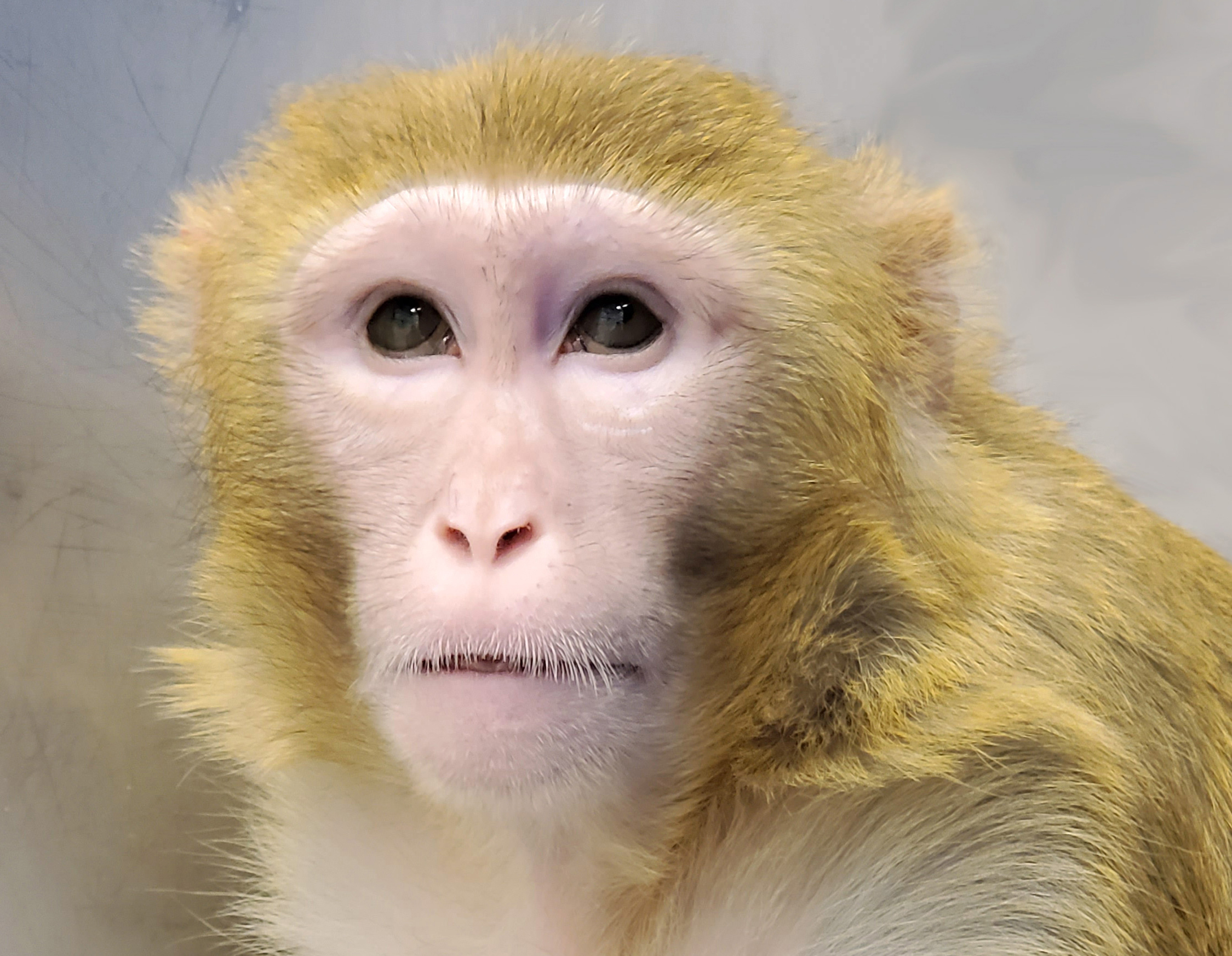 This rhesus macaque is one of three discovered by researchers at OHSU to have the gene mutation. The monkeys could help researchers develop and evaluate potential gene and cell therapies to treat the condition, for which there currently is no cure. (OHSU/Lauren Renner)

A genetic mutation that leads to a rare, but devastating blindness-causing syndrome has been discovered in monkeys for the first time. The finding offers a promising way to develop gene and cell therapies that could treat the condition in people.

Three rhesus macaques with a mutated gene that’s associated with Bardet-Biedl Syndrome have been discovered, according to study published in the journal Experimental Eye Research. It is the first known naturally occurring nonhuman primate model of the syndrome, which is also called BBS.

BBS leads to vision loss, kidney dysfunction, extra fingers or toes, and other symptoms. It occurs in 1 of 140,000 to 160,000 North American births.

“There is no cure for Bardet-Biedl Syndrome today, but having a naturally occurring animal model for the condition could help us find one in the future,” said the paper’s corresponding author, Martha Neuringer, Ph.D., a professor of neuroscience at the Oregon National Primate Research Center at Oregon Health & Science University, and a research associate professor of ophthalmology in the OHSU School of Medicine and OHSU Casey Eye Institute.

Rhesus macaques with this disease could help more than just BBS patients. BBS is part of a larger family of diseases called retinitis pigmentosa, all of which affect the retina, or the back part of the eye. A naturally occurring animal model for BBS could help researchers find treatments for a variety of retinitis pigmentosa diseases.

The discovery is timely, as gene therapy is already becoming a reality for some with retinal diseases. In the 1990s, researchers discovered dogs that had a gene mutation linked to a congenital blindness-causing condition called Leber’s congenital amaurosis. That animal model played a key role in helping researchers develop what became the first FDA-approved gene therapy for an inherited disease in December 2018. Neuringer’s group also hopes to develop a similar therapy for BBS.

After Neuringer and colleagues discovered two related monkeys without cells that are key to vision, OHSU nonhuman primate genetics experts Betsy Ferguson, Ph.D., and Samuel Peterson, Ph.D., examined the animals’ genomes. They quickly found both monkeys had a mutation of the BBS7 gene, one of at least 14 genes associated with BBS.

Because Ferguson leads an effort to genetically sequence 2,000 rhesus macaques at the nonhuman primate research center, they were also able to search the genomes of numerous other monkeys there. As a result, the team found a third monkey with the same mutation. The third rhesus macaque already had serious vision loss when it was identified in 2018 at age three and a half, although it adapted so well among its social group that the vision loss wasn’t obvious. Neuringer’s team is observing the third monkey over time to better understand how the disease progresses in rhesus macaques.

Neuringer and her colleagues are now using a National Eye Institute grant to breed more animals with the naturally occurring BBS7 mutation. Having more animals with the mutation can help researchers better understand the disease and test potential treatments. The knowledge they gain could enable them to develop gene and cell therapies that could cure BBS and related retinal degenerative diseases.

This rhesus macaque is one of three discovered by researchers at Oregon Health & Science University to have a naturally occurring BBS7 gene mutation that leads to Bardet-Biedl Syndrome, a rare condition that causes blindness, kidney dysfunction and other problems in humans. The monkeys could help researchers develop and evaluate potential gene and cell therapies to treat the condition, for which there currently is no cure. (OHSU/Lauren Renner)