New app is like having 'team of doctors and nurses at my fingertips,’ mom says 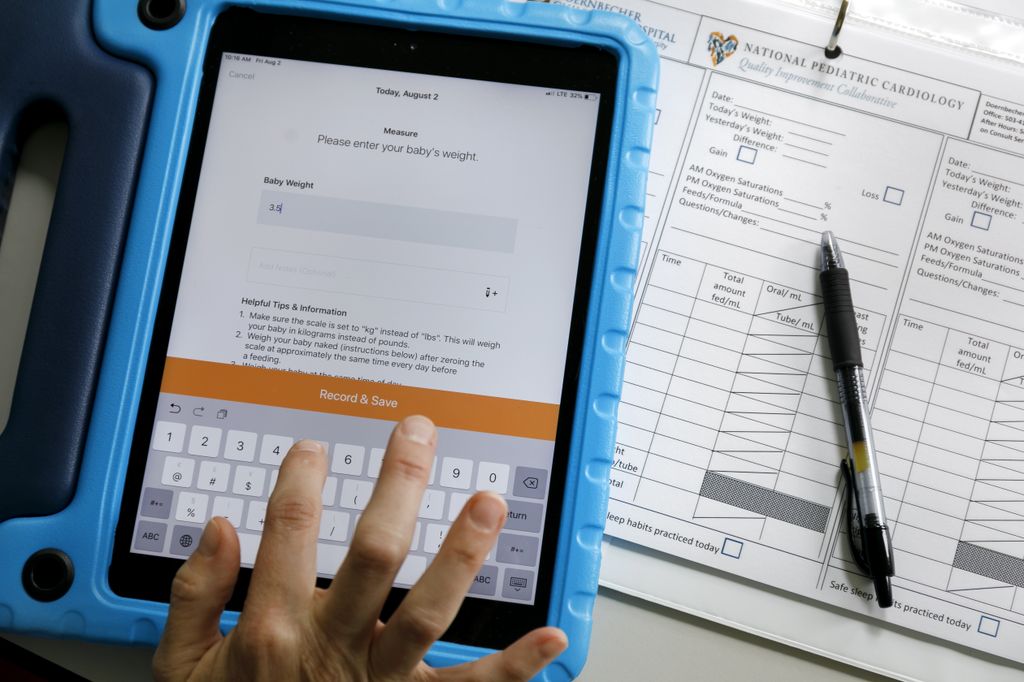 The Interstage Remote Monitoring program lets cardiology nurses track the weight, oxygen levels and food intake of infants who have recently discharged after heart surgery. Previously, this information was dictated over the phone. (OHSU/Kristyna Wentz-Graff)

Archer Young was diagnosed with congenital heart disease last spring, 10 hours after he was born. His heart was not pumping blood to his lungs, and he was cyanotic, or blue, due to lack of oxygen -- a telltale symptom of a heart lesion.

Instead of returning home, Young and his mother, Deana Moretti, were rushed to the neonatal intensive care unit at OHSU Doernbecher Children’s Hospital, where he was treated and monitored for more than a month.

When it was finally time to be discharged home, it was anxiety, rather than joy, that set in for Moretti. As a nurse, Moretti is familiar with complex health conditions, however, this knowledge made the transition from hospital to home even more frightening.

"It’s nerve-wracking to bring a new infant home, let alone one who is medically fragile," Moretti explains. "With my background in health care, I knew about all of the possible things that could happen. It made me worry even more."

Having a baby with congenital heart disease also means paperwork, and a lot of it, given the various stages of treatment, which can range from shunt placement to a series of surgical procedures, along with daily tracking of weight, oxygen levels and food intake. Any significant change must be immediately reported to the health care team to assess whether an at-home intervention or hospitalization is required. 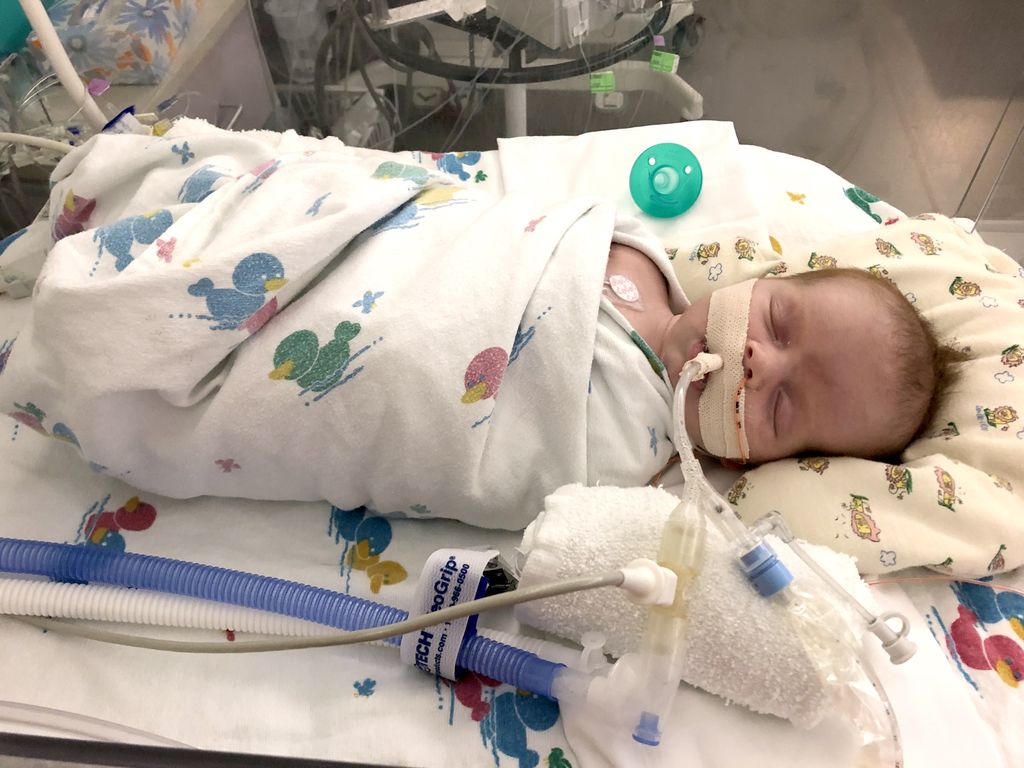 Until recently, OHSU Doernbecher families of newborns with CHD wrote everything down in a thick notebook and verbally shared it weekly with a nurse via phone. Although effective, the process could be tedious, particularly for overwhelmed and sleep-deprived caregivers.

“It’s an archaic system with a lot of room for unintentional error,” says Christina Ronai, M.D., an assistant professor of pediatrics (cardiology) in the OHSU School of Medicine, OHSU Doernbecher Children’s Hospital. “Numbers can easily get transposed, written illegibly or misunderstood. Papers can get misplaced or forgotten. This can lead to unnecessary concern, stress or trips to the hospital. Something had to be done to update and simplify this process for these families, as well as the health care team.”

When Moretti finally left OHSU Doernbecher for home in Scio, Oregon, she was armed not only with a thriving baby boy, but a weight scale, an oxygen monitor and an Apple iPad.

Young was one of the children’s hospital’s first heart patients to enroll in a new program called Interstage Remote Monitoring, developed by Ronai and funded by The Jackson Foundation.

The iPad, equipped with a specialized app powered by Locus Health, replaced the pen-and-paper method. Now, parents log their child’s oxygen levels, weight and food intake in the app, which links to existing hospital workflows and is reviewed daily by cardiology nurse Amy Brown.

The app provides red-flag warnings of extreme changes in weight or oxygen levels. Families also can upload photos or videos of potential health concerns, such as abnormal breathing patterns.

“We can obtain, review and assess patient data in real-time, even from hundreds of miles away,” said Ronai. “We don’t have to wait a full week, or for a frantic emergency phone call, to check in on a child’s health status. While this is helpful to our care processes, the real benefit is to our families who now feel more confident in caring for their children outside of the hospital.”

The program, which began in February 2019, has expanded to include other children who require care in the neonatal intensive care unit at OHSU Doernbecher. Called Growing @ Home, the NICU-based remote monitoring program is similar to its cardiac partner, Interstage Remote Monitoring. It equips families with the tools to monitor weight and food intake, and access to the tracking app.

“The issue that commonly extends an infant’s stay in the NICU is feeding,” says Jamie Warren, M.D., associate professor of pediatrics (neonatology) in the OHSU School of Medicine, OHSU Doernbecher Children’s Hospital. “Because Growing @ Home offers access to the same tracking capabilities available at the hospital, we feel confident discharging patients sooner, allowing them to enjoy the comforts and healing benefits of their own home and community.”

According to Moretti, this modern approach to newborn in-home care acts as an added layer of connectedness to her son’s health care team.

"It’s a lifeline," she says. “It gives me peace of mind. Like I have our team of doctors and nurses at my fingertips." 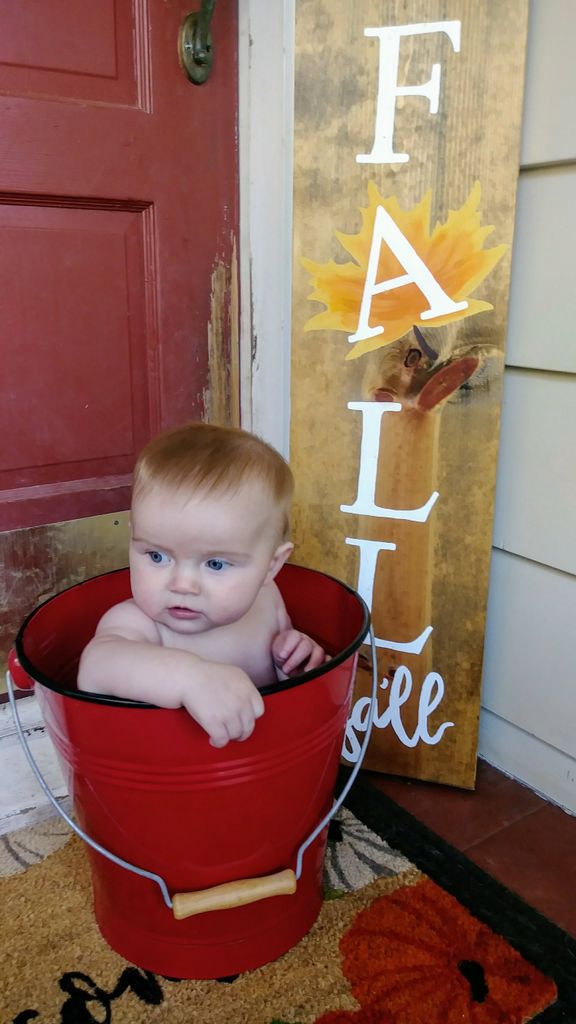 The Interstage Remote Monitoring program lets cardiology nurses track the weight, oxygen levels and food intake of infants who have recently discharged after heart surgery. Previously, this information was given over the phone from parents to the nurses.  (OHSU/Kristyna Wentz-Graff)

The Interstage Remote Monitoring program lets cardiology nurses track the weight, oxygen levels and food intake of infants who have recently discharged after heart surgery. Previously, this information was given over the phone from parents to the nurses. (OHSU/Kristyna Wentz-Graff)