New findings suggest that it will be possible to find and treat many cancers early
By Joe Rojas-Burke February 05, 2020 Portland, Oregon 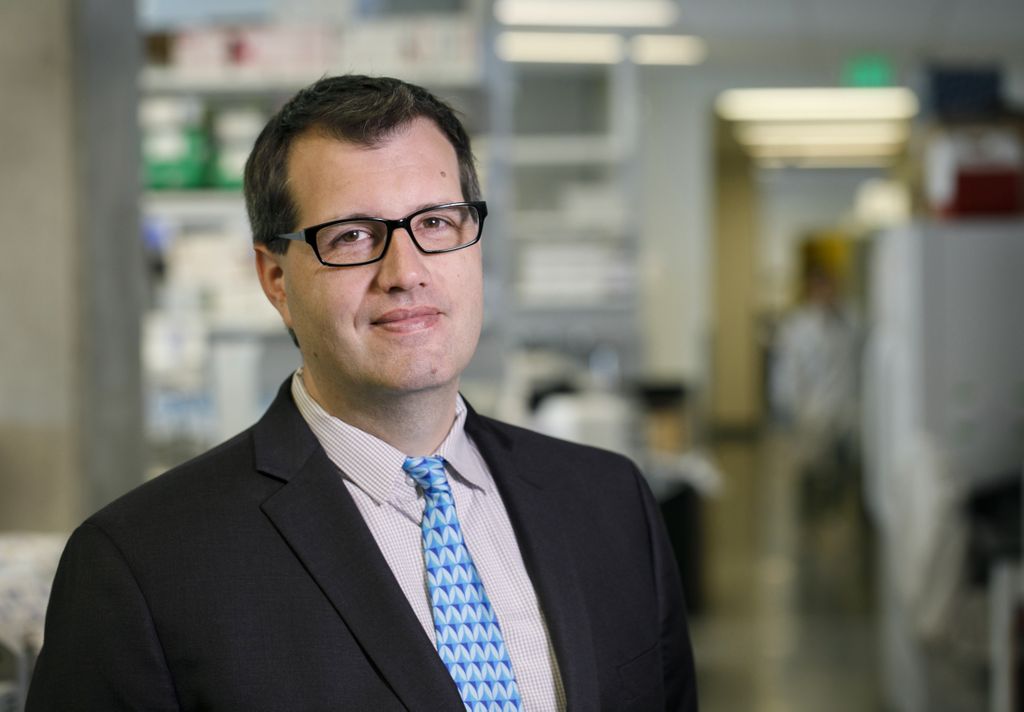 Paul Spellman, Ph.D., jointly supervised an international research study that shows errors in DNA trigger the start of some deadly cancers that can arise a decade or more before tumors appear. (OHSU/Kristyna Wentz-Graff)

For cancers that can’t currently be detected early, a new discovery suggests there may be a large window of time in which to look for smoldering cancer cells and eliminate them before they become life-threatening. Errors in DNA that trigger the start of some of these deadly cancers can arise a decade or more before tumors appear, according to an international team of scientists.

The findings, published in the journal Nature, fit with what is known about the few kinds of cancer in which researchers have worked out the timing of progression. In colon cancer, for instance, pre-cancerous growths called polyps form 10 to 15 years before giving rise to malignant tumors.

“Our new data show that the timing can be similar in cancers without detectable premalignant conditions, such as ovarian cancer, raising hope that these tumors also can be identified in pre-cancerous stages,” said Paul Spellman, Ph.D., a professor of medicine (hematology and medical oncology) in the OHSU School of Medicine and one of the senior authors of the new study.

“The challenge that remains is developing tests for these early signatures of cancer that are reliable enough to use as screening tests,” said Spellman, who is co-director of CEDAR, the Cancer Early Detection Advanced Research Center in the OHSU Knight Cancer Institute.

The study was massive in scope and took the work of an international team, including scientists at The Francis Crick Institute, University of Oxford, EMBL-EBI, the Wellcome Trust Sanger Institute, and the BROAD Institute. Spellman jointly supervised the research with Peter Van Loo, Ph.D., at The Crick, and David C. Wedge, Ph.D., at Oxford’s Big Data Institute.

Tumor samples from more than 2,600 donors were subjected to whole genome sequencing, that is, working out the complete DNA instruction set of each sample, and the multitude of deletions, duplications and other errors acquired during the evolution of the population of cancer cells making up the tumor. The work was part of the Pan-Cancer Analysis of Whole Genomes Consortium of the International Cancer Genome Consortium (ICGC) and The Cancer Genome Atlas (TCGA).

Using the DNA sequencing data, researchers were able to reconstruct the history of the mutations that arose during tumor development in 39 kinds of cancer. The researchers tracked DNA mutations, which are passed on during cancer cell division to daughter cells and sometimes duplicated and moved to new locations on chromosomes. The record left in the DNA sequence makes it possible to determine the order of mutation occurrence, and the relative time span between mutations.

Across cancer types, the team found that half of early mutations driving cancer arise in just nine genes. Many more genes develop mutations later. That suggests there is a small set of genes that are common drivers of early cancer development.

The study revealed specific changes that are likely to happen early in different cancer types. In pancreatic neuroendocrine cancers, for example, the researchers found that several chromosomal losses occur early, followed by cancer driver mutations in two genes, MEN1 and DAXX. In glioblastoma, they found that loss of chromosome 10 and driver mutations in TP53 and EGFR appear very early.

Spellman said researchers can now use these tools to examine the mutagenic conditions in which tumors developed. In the new paper, the team was able to find mutational signatures of tobacco smoke exposure in the early stages of tumor formation. These early signatures were most pronounced in lung adenocarcinoma samples.

“We now have the opportunity to understand when mutagenic processes are active during a tumor’s development,” Spellman said, “which could help us understand when environmental exposures might be most dangerous.”

Mutations tend to arise particularly early in ovarian cancer and two types of brain cancer, the study found. In glioblastoma brain tumors, the researchers said chromosome alterations were consistently timed within the first 10% of relative mutational time, suggesting they arise very early in a patient’s lifetime. In the childhood cancer medulloblastoma, the majority of whole genome duplication events fall into the first two years of life. In ovarian adenocarcinomas, the researchers found that whole genome duplication events occur more than two decades before diagnosis in almost half of patients.

While researchers have identified a large number of mutations and chromosome rearrangements that drive tumors, for many kinds of cancer they knew little about the timing of events from the earliest errors in DNA until tumors becomes aggressive and life-threatening. If that interval is too short, early detection becomes impossible. The new findings provide evidence to the contrary and suggest that it will be possible to find and treat many cancers early.

“This is a big step forward towards cancer early detection and prevention,” said Sadik Esener, Ph.D., the director of CEDAR at the OHSU Knight Cancer Institute and a professor of biomedical engineering in the OHSU School of Medicine. “Large scale international collaborations like ICGC and the ACED Alliance that CEDAR is funding are keys to better understand and ultimately control disease progression. The results in this study point to the possibility and importance of detecting the disease at its premalignant stage.”

The work is part of a collection of reports published in Nature from the Pan-Cancer Analysis of Whole Genomes Consortium, which involves more than 1,300 investigators from 37 countries.