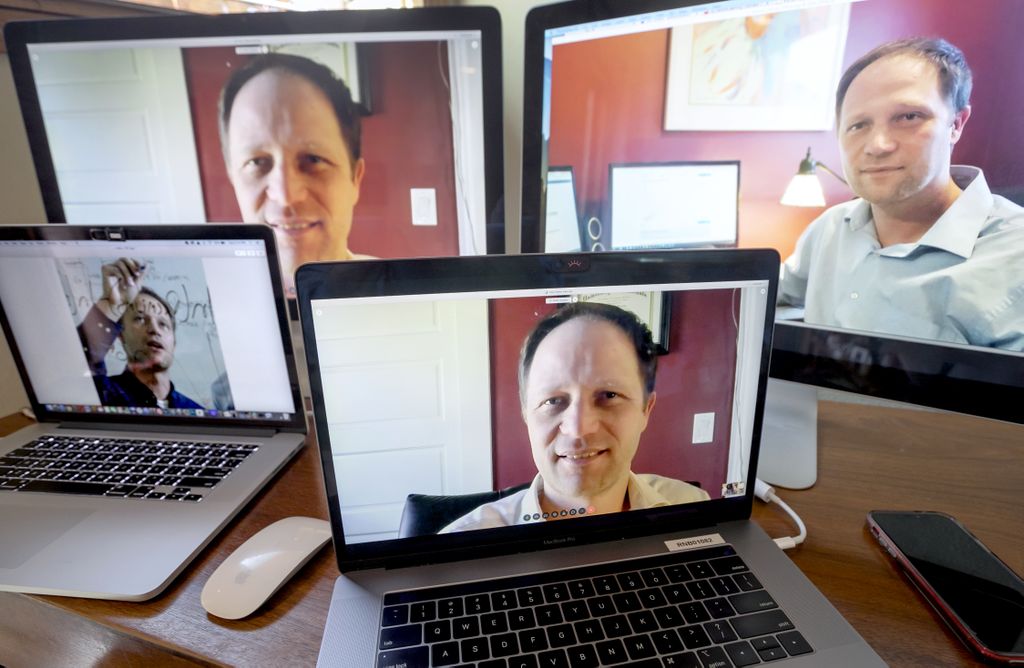 It’s his job to predict the future.

As the lead data scientist in OHSU’s Business Intelligence unit, Peter Graven, Ph.D., uses numbers and advanced analytics to forecast health-related outcomes. On any given day, he might model hospital readmission rates or the cost-effectiveness of a clinic’s quality improvement effort.

Then came the news of Oregon’s first presumptive case of COVID-19 on Friday, Feb. 28. The next morning, Graven woke up and thought, “What are the ramifications for OHSU? For Portland and Oregon?” He turned to data.

On his own initiative over the next week, the assistant professor of health management and policy, OHSU-PSU School of Public Health, burrowed into infectious disease and epidemiology principles, teaching himself these fields. He collected data from China and South Korea. He modeled several predictive approaches and based them on the city of Daegu in South Korea’s North Gyeongsang Province, a city similar in size to Portland that was experiencing an outbreak.

The graph he produced mimicked what would happen to the Portland area over the next month if no stringent public health measures were implemented. The figure showed the need for hospital beds doubling and doubling over time, outstripping bed capacity. The exponential curve resembled a finger pointing to the sky – a warning.

“I knew it was serious,” said Graven. “If we didn’t act fast, we would be like Italy, a disaster on the front pages of the news.”

What started out as a personal project became one of the most consequential tasks of his career. People’s normal instincts, Graven knew, is to try something and then wait to see if it works.

“That’s a recipe for disaster for things that grow exponentially,” he said. “If you mess up, it will get away from you. The difference between a good decision and a bad decision is just days. Numbers can clarify that.”

“It scared me to death,” she said. “We were already preparing for the pandemic, but we were talking in generalities. Peter’s model made COVID-19 an absolute stark reality. It gave us a timeframe and brought everything into focus.”

Catalyzed, OHSU leaders began using the model the weekend of March 14 as they conversed with other health system leaders, data scientists, policymakers and the governor  –  helping make the case for urgent, decisive action. On March 16, Gov. Kate Brown closed schools statewide. A week later, she issued a statewide stay-at-home order.

The result? Oregon is a top performer so far in managing the projected surge. Graven reports a decrease in statewide hospital admissions that began April 4  –  exactly 12 days after the statewide stay-at-home order, which is enough time for someone to become infected, deteriorate and ultimately end up in the hospital.

“We are on track to flatten the curve,” she said. “We thank everyone in this moment because keeping the infectivity rates down has given us the capacity to care for people in our hospitals and through digital and virtual means in our ambulatory settings. We are maintaining the health and well-being of our workforce. There is no way we could do this alone.”

Become your own COVID-19 forecaster with Graven’s custom web tool.

Graven echoes the gratitude. As a trained health economist, he understands the enormous economic and personal consequences.

“People have been told they can’t do a lot of things right now; for many, it’s their livelihoods. I know this creates real damage. Their sacrifices are appreciated. But history is starting to show that you’re not going to be able to open up your economy if people don’t think it’s safe to go places.”

Like others, Graven is working at home, putting in 12-hour days as he and his wife juggle the demands of their jobs and the care and schooling of elementary-aged children. He says he’s proud of the role his information has played.

But Graven doesn’t dwell on the past. He’s a forecaster. Already, he’s revised his original model a couple times. And he’s now working on different models to forecast Oregon’s “new normal,” analyzing how various policies that relax restrictions will affect hospitalization rates.

Both Edwards and Graven agree that, to prevent another surge in hospital admissions, some public health measures will need to remain in place for the foreseeable future. “The virus is with us,” said Edwards. “We are now in a marathon, not a sprint. We’ll need to find a balance between isolation measures and economic activity.”

Graven sees a hopeful future. He envisions effective COVID-19 treatments on the horizon, campgrounds that might open this summer and, like any frazzled parent, school starting this fall.

But the thing he’s looking forward to most? “Getting my hair cut. Professionally.”