One ‘miracle’ patient’s motto: ‘Be grateful for today’

OHSU patient is second in the U.S. to use a new treatment for a rare form of cancer, defies odds with positive response
By Amanda Gibbs November 16, 2020 Portland, Oregon 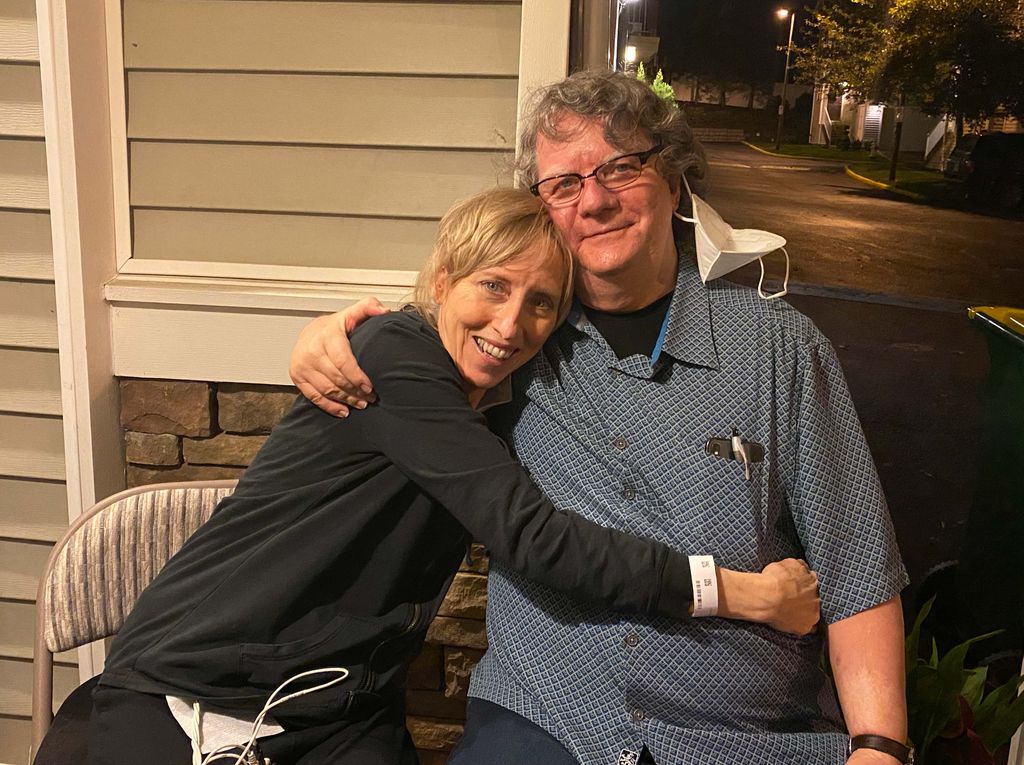 Lisa Wooden and her husband, Peter Hansen. Wooden is the second person in the U.S. to use a new treatment for a rare form of cancer. (Lisa Wooden)

In early January 2019, Lisa Wooden thought she had the flu. She went to urgent care, saw her primary care physician and was referred to an infectious disease specialist. After a variety of tests and scans, she learned there was a growth in her chest wall, and on Jan. 16, she was diagnosed with cancer.

She underwent additional testing — including a biopsy — and after a trip to the emergency room in late January due to increasing pain, she was referred to OHSU for treatment. It was there that her diagnosis was confirmed — she had biphasic stage 4 mesothelioma. Mesothelioma is a form of cancer that occurs in the thin layer of tissue that covers internal organs, such as the lungs or stomach. It is considered a rare cancer by the American Cancer Society, with only 3,000 cases diagnosed every year in the U.S.

Doctors informed Wooden she had a large tumor the size of a grapefruit in her chest wall, near her lung, that was inoperable due to its size and position. In January 2019, she was told she had an estimated one year to live. 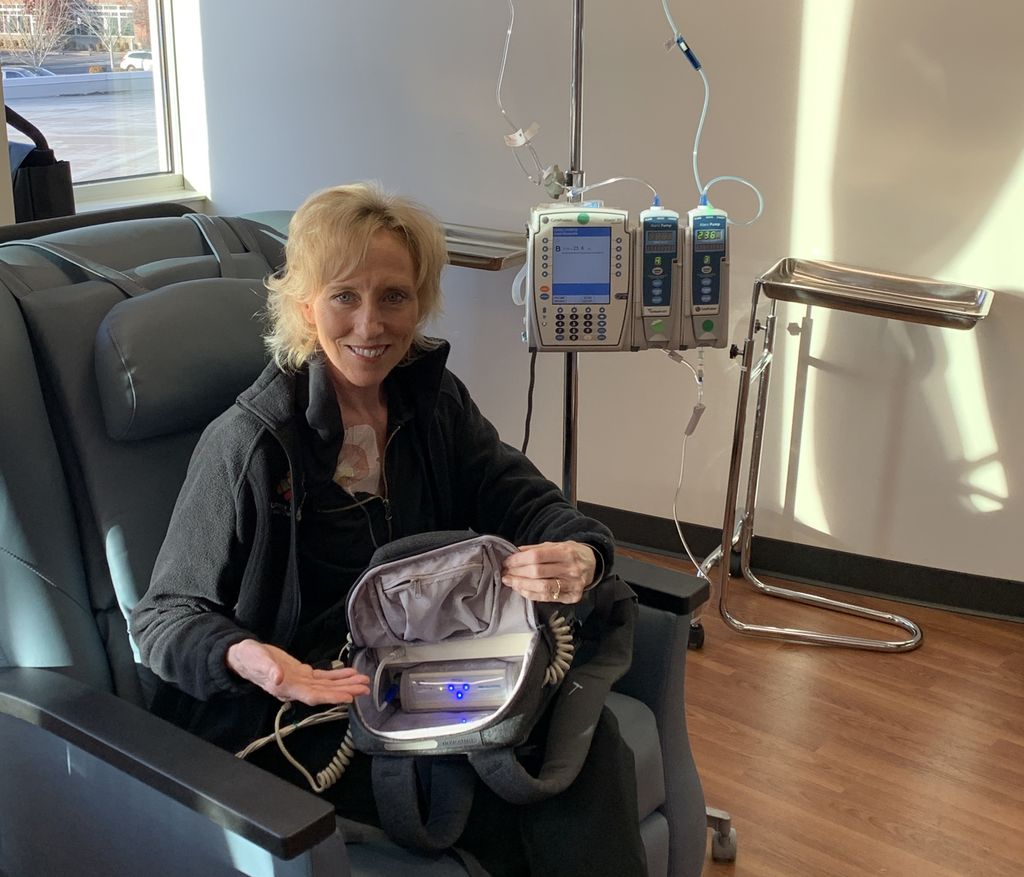 Lisa Wooden receives treatment at the OHSU Knight Cancer Institute, Beaverton clinic. Over the course of her treatment, Wooden underwent a combination of chemotherapy, immunotherapy, radiation therapy and tumor-treating fields in an effort to shrink the size of her tumor. (Lisa Wooden)

Knowing surgery was not an option, Wooden was referred to the OHSU Knight Cancer Institute clinic in Beaverton under the care of Nagendra Tirumali, M.D., assistant professor of medicine (hematology/medical oncology) in the OHSU School of Medicine. Over the following months, she underwent a combination of chemotherapy, immunotherapy, radiation therapy and tumor-treating fields in an effort to shrink the size of her tumor.

“The nurses at the clinic were so amazing. They make you feel like family,” Wooden says. “I know the names of their kids, what trips they had planned, you name it. They have a job that truly makes a difference in the world.”

In response to her difficult diagnosis, Wooden’s husband, Peter Hansen, went to work researching options. She says her husband spent countless hours reading medical journals, oncology articles and researching clinical trial options. When Tirumali took a leave from the clinic due to planned time off, Wooden was referred to oncologist Gary Takahashi, M.D., assistant professor of medicine (hematology/medical oncology) in the OHSU School of Medicine, for continued care.

“Dr. Takahashi is incredible. Peter would send him emails with potential meso treatments at all hours of the day and ask for his thoughts,” she says. “Dr. Takahashi and Peter were copacetic, and he was so patient and understanding answering all of Peter’s questions.”

“Despite all of Peter’s research on treatment options, it was very important for me to keep a strong quality of life,” she says. “He had found Novocure and wanted me to try it. I didn’t know much about it, but after hearing more about it, I decided I was along for the ride.”

What Hansen found was a new and first-of-its kind treatment for mesothelioma from a company called Novocure. The company’s Tumor Treating Fields treatment, or TTFields, is the first FDA-approved treatment for mesothelioma in 15 years. According to the Novocure website, TTFields is a cancer therapy that uses electric fields tuned to specific frequencies to disrupt cell division, inhibiting tumor growth and, potentially, causing cancer cells to die.

“Peter had read up all about it, and we agreed the technology behind it was pretty amazing,” she says. “It was overwhelming, but we agreed it was worth investigating. The reason I’m on TTF is because of him.”

Becoming the second patient in the U.S. 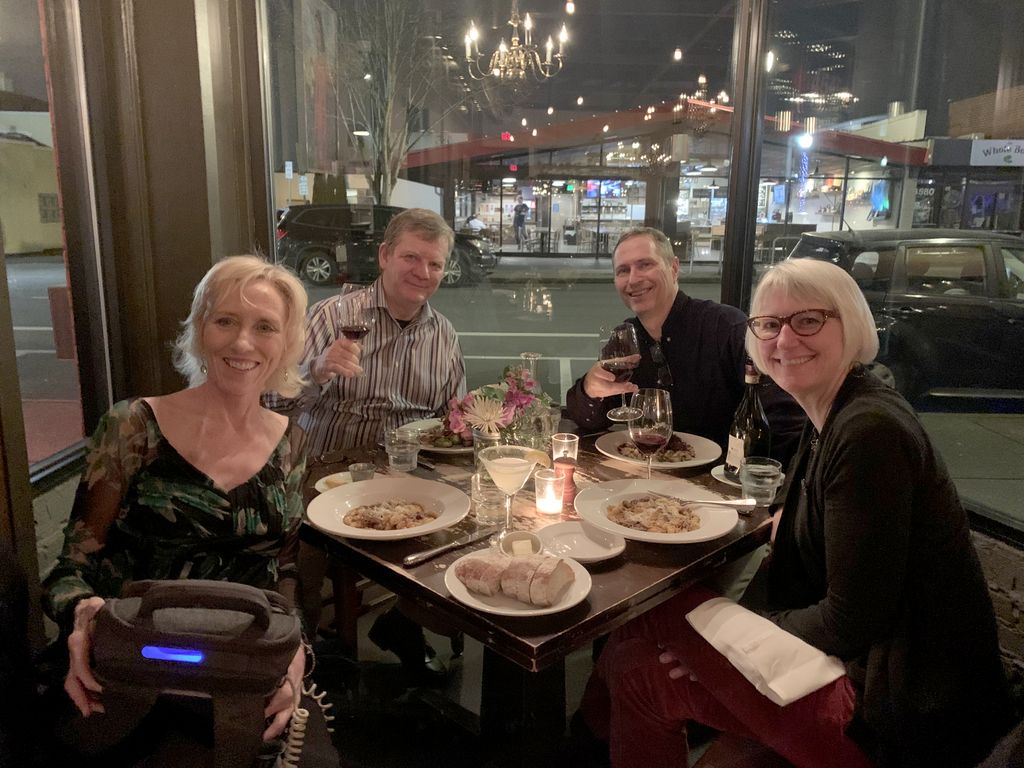 Wooden and her husband, enjoy a pre-pandemic dinner out with Woodens brother, Blaine, and her sister-in-law, Rebecca.

Wooden learned more about the technology behind the TTFields treatment, including its ability to change the polarity of cells at a rate of 100,000 times a second so the cancer cells cannot divide and grow. She learned it’s a wearable, portable device that destroys tumor cells without hurting healthy tissue. The extensive treatment involved specialized arrays fitted to her body attached to an 8-pound backpack she would wear up to 18 hours a day for treatment.

She also learned that she would be just the second patient in the U.S. to use the treatment following the FDA approval, and that OHSU — including the OHSU Marquam Hill and South Waterfront campuses, OHSU Beaverton clinic and the OHSU Health Hillsboro Medical Center — was just the third site in the country certified to offer the treatment to its patients.

“Once you get over the initial side effects and hurdles, you kind of get into a groove,” she says. “I’ve figured out a system that works for me. I tend to power through and wear the TTF 18 to 20 hours a day, so I can get a bit of a break later on, and do it for fewer hours other days.”

Wooden has been on TTFields since Oct. 31, 2019. In addition to her total treatment regimen that included chemotherapy, immunotherapy and radiation therapy, she has experienced limited growth in the size of her tumor.

On being called a ‘miracle’ 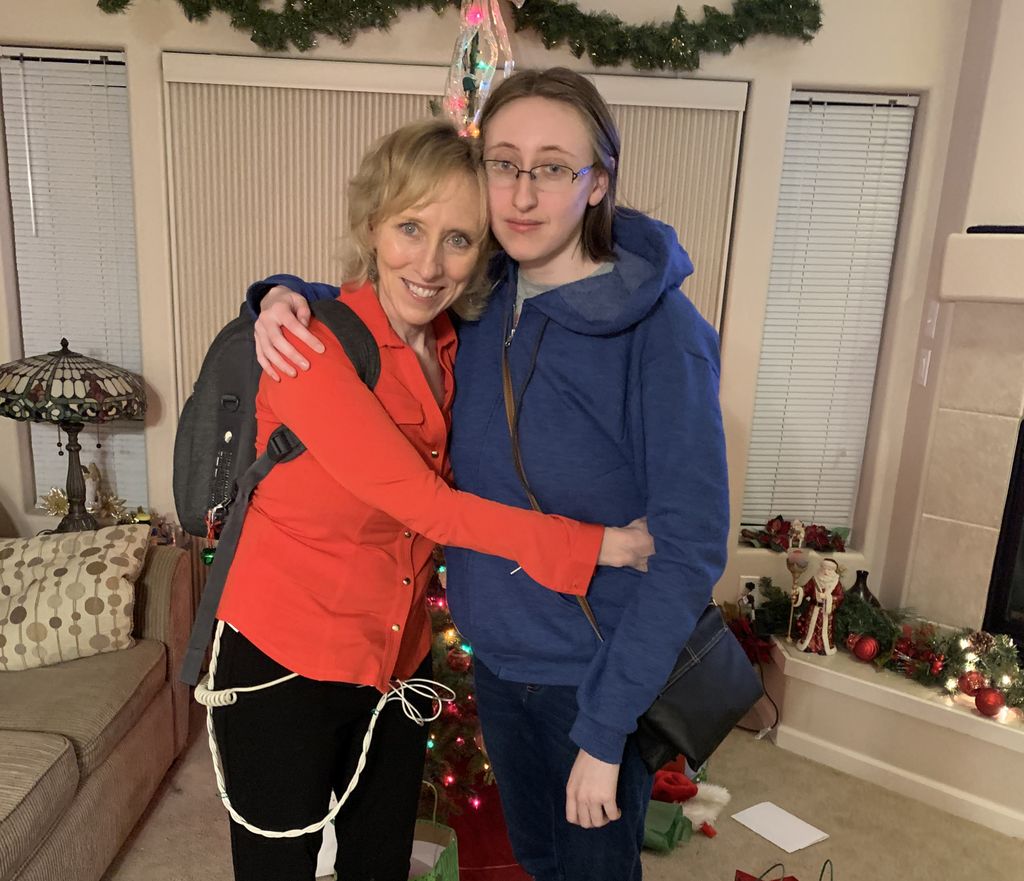 Wooden and her daughter, Nicole, celebrate the Christmas holiday in 2019. (Lisa Wooden)

When Wooden went in for a routine check-up at the clinic in August 2020, Wooden says Takahashi called her a “miracle” to survive this long with advanced disease and no option for surgery.

“I started seeing him with a massive growth in my chest wall, and we’ve now stopped the growth in its tracks,” she says. “I had two good scans in a row with no tumor growth. We know chemo helped, we know radiation and immunotherapy helped, and I think the TTF is helping, too. I can’t say enough about the amazing care I’ve received at OHSU.”

After her most recent scan, Wooden’s daughter came over to visit her outside to abide by social distancing guidelines.

“I was running around — well, I can’t really run anymore — but I was screaming: ‘I’m going to live longer!’ I was basically a madwoman. But those moments are amazing, and I don’t take them for granted.”

Looking ahead, and advice for coping in a pandemic

Wooden says the pandemic has brought a new sense of perspective to her treatment.

“When I started treatment, we were not in the middle of a pandemic. And now that we are, a lot of people are in the same boat I am — they’re worrying all the time,” she says. “People are worried about their finances, their insurance, their health. There’s a lot of stress in the world right now. My goal is to be here as long as I can for my family and friends. Everybody could use hope these days; everyone could use encouragement.”

What advice does she have for patients facing a difficult diagnosis?

“Don’t give up. It’s hokey, it’s a cliché. But it’s true,” she says. “You get that prognosis and you think I’m done. But you have to keep hoping, keep trying. Eventually, someday there will be a cure — even for something as rare as mesothelioma. They may be on track with the TTF device. But no matter what, you have to always keep up the hope.”

“I’ve been doing my best for my husband, my daughter, my best friend and my brother. Every moment past that terminal diagnosis is worth it.”