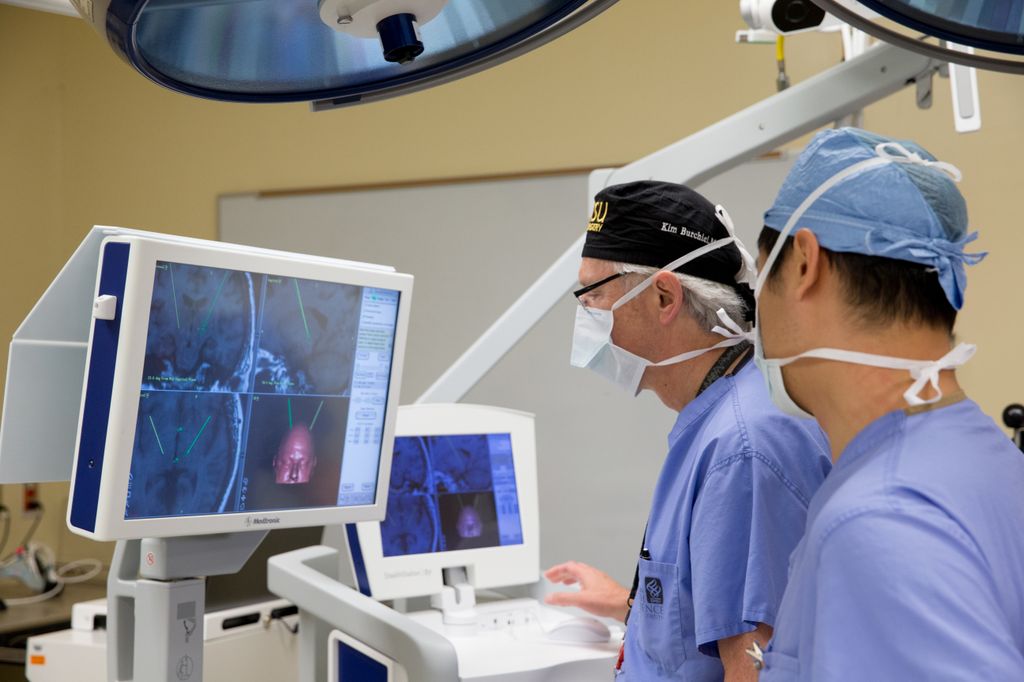 Kim Burchiel, M.D., is the first U.S. surgeon to pioneer the use of deep brain stimulation to treat symptoms of Parkinson's disease and essential tremor. Even though essential tremor is believed to be eight times more common than Parkinson's, many people suffer with it for years before even bothering to see a doctor. (OHSU)

If you don’t personally suffer from Parkinson’s disease, chances are you’ve at least heard of it.

Celebrities including the actor Michael J. Fox, the late heavyweight champion Mohammed Ali and former U.S. Attorney General Janet Reno raised attention about the neurodegenerative condition that affected them plus an estimated 1.5 million other Americans.

Essential tremor, by contrast, gets scant attention even though it’s estimated to be eight times more common than Parkinson’s.

I’m convinced that the lack of general public understanding about this disorder has kept many people from seeking effective treatment. Even though some people with essential tremor are treated with anticonvulsant medication such as primadone, the benefits tend to decrease over time while side effects can include dizziness, confusion or extreme drowsiness.

Instead, many people with essential tremor quietly suffer for years with the condition’s single but maddening symptom: involuntary and rhythmic shaking.

Three decades ago, I was the first U.S. surgeon to pioneer a surgical technique called deep brain stimulation to treat symptoms of Parkinson’s and essential tremor. Most of the patients I see at Oregon Health & Science University suffer from Parkinson’s, yet I’ve also seen scores of people with essential tremor who suffered with the symptoms for years before even bothering to see a doctor.

They didn’t need to wait so long.

At OHSU, we have started implanting a new type of omnidirectional electrode over the past three years with results that are especially encouraging for people with essential tremor.

This technology is particularly useful these patients, because it efficiently controls the tremor while minimizing unwanted side effects of earlier generations of the electrode, such as slurring speech, wobbly balance or a slow walking gait.

Many of our tremor patients have reported walking away from surgery with their lives back. That’s because they don’t suffer from many of the other symptoms characterized by Parkinson’s – including balance, breathing and cognitive issues in addition to tremor – that can’t be addressed through deep brain stimulation.

For people with essential tremor, surgery offers a remarkable possibility: If you stop the tremor, you’ve stopped the symptoms.

We know that the way we are deploying this new technology is changing the game for people living with essential tremor. As a physician, it’s particularly rewarding when we hear back from patients who have become almost symptom-free since their surgery. Bear in mind that many patients come to see us with symptoms severe enough that they cannot so much as sign their name, take a drink of water without a spill or drive a car.

Clearly, going through brain surgery is not a decision to be taken lightly.

People with essential tremor should first talk with their primary care physician and, if surgery is considered a possibility, seek a referral to OHSU. Our multidisciplinary approach includes a comprehensive assessment by a neurologist along with a team of specialists including physical therapy, speech therapy and neuropsychology.

The goal is to create a treatment plan for each patient based on their own medical history and needs.

For some people, that could mean surgery. For others, it could mean lifestyle changes or a change in medication that reduces tremor while also minimizing side effects.

The surgery involves placing twin electrodes in specific areas of the brain, attached to a cable running through the neck to a small generator implanted in the chest. Some have compared it to a pacemaker for the brain.

We do know that there are an enormous number of people in Oregon and throughout the country who could benefit from surgical intervention. Right now, essential tremor cases account for only about a third of all DBS surgeries conducted at OHSU – even though the International Essential Tremor Foundation estimates that essential tremor is believed to be eight times more widespread in the population than Parkinson’s.

I see it walking around in my own community. Before the COVID-19 pandemic kept people indoors, hardly a day went by that I didn’t spot someone with the telltale rhythmic shaking. I believe the lack of recognition and understanding about essential tremor – even among people living with the condition – prevents many people from seeking treatment at all.

At OHSU, we’re hoping to change that.

Kim Burchiel, M.D., is former chair and professor of neurological surgery in the OHSU School of Medicine in Portland.

This viewpoint was originally published in Pulse magazine, a publication of The Bulletin (Bend, Oregon), on Dec. 18, 2020.