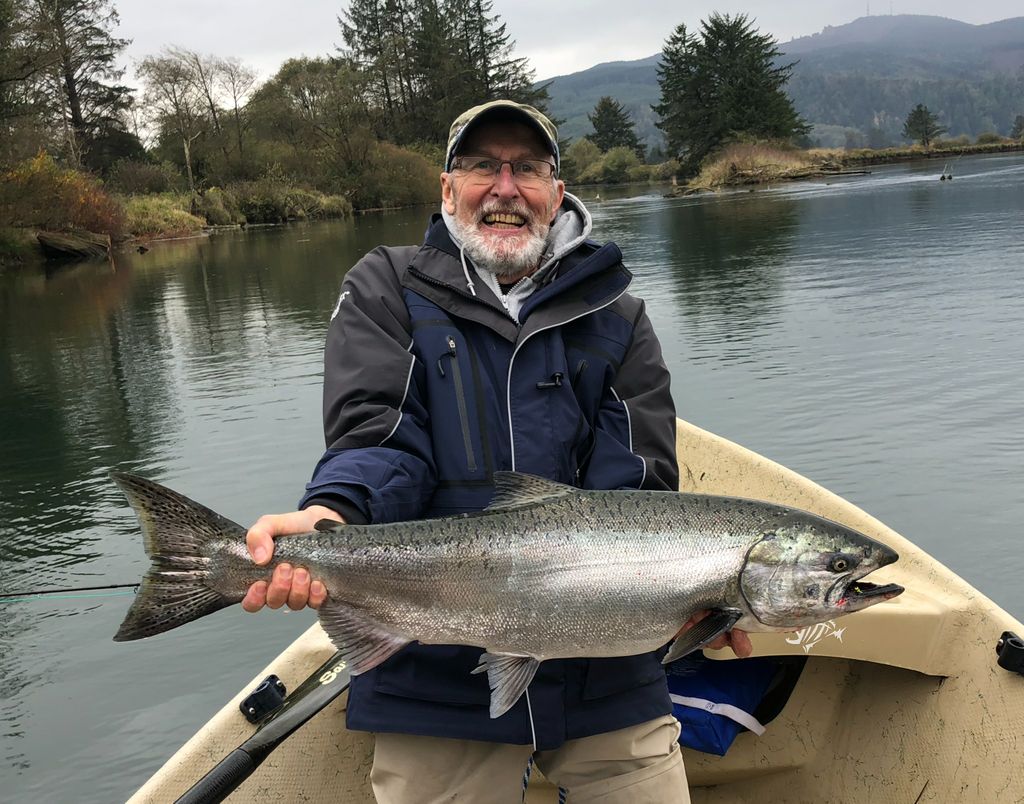 Paul Renaud of Grants Pass, Oregon, who lived with essential tremors, is back to fishing thanks to the surgical implantation of a directional electrode in his brain. (Photo courtesy Paul Renaud)

An avid fly fisherman can get back out on his beloved Rogue River. A Portland-area resident is making plans for a cross-country road trip with his two college-age grandsons.

The key to their new lease on life? Brain surgery.

They are among a small but growing cadre of patients to undergo neurosurgery at Oregon Health & Science University to cure the often-overlooked condition known as essential tremor. OHSU neurosurgeons are using the latest innovation in surgical technology – a directional electrode implanted in the brain – to transform the lives of patients who have quietly suffered for years with uncontrollable shaking.

Paul Renaud, the lifelong fly fisherman who lives in Grants Pass, said he now wishes he had the procedure years ago.

“It’s been life-changing,” he said.

Kim Burchiel, M.D., an OHSU neurosurgeon who pioneered deep brain stimulation in the United States three decades ago, leads a team that is using new state-of-the-art electrodes to precisely target areas in each patient’s brain that cause tremor. Although deep brain stimulation is now a well-established procedure to control symptoms of essential tremor and Parkinson’s, OHSU is among a handful of U.S. centers to use new directional electrodes made available in the past three years.

So far, the results are encouraging.

“What we’re doing with essential tremor is new,” said Burchiel, professor of neurological surgery in the OHSU School of Medicine. “The way that we are deploying this technology could change the game for people living with ET.”

Essential tremor accounts for only about a third of all DBS surgeries conducted at OHSU, with the rest focused on treating symptoms of Parkinson’s disease. Whereas Parkinson’s is a neurodegenerative disease that progresses over time – with symptoms that can include balance, breathing and cognitive issues in addition to tremor – essential tremor is strictly related to involuntary and rhythmic shaking.

“If you stop the tremor, you’ve stopped the symptoms,” Burchiel said.

Burchiel said there are an enormous number of people with essential tremor who could benefit from surgical intervention.

Essential tremor is believed to be eight times more widespread than Parkinson’s, according to the International Essential Tremor Foundation. The most common treatment is generally limited to lifestyle adjustments and anticonvulsant medications such as primidone. However, the condition tends to worsen over time.

Trying to control the tremor by increasing the dosage of these medications typically leads to side effects such as dizziness, confusion, extreme drowsiness or worse, said Delaram Safarpour, M.D., a neurologist who serves as co-director of the DBS program at OHSU. By the time patients are referred for surgery, the condition has deteriorated to the point that some patients struggle to feed themselves without help.

“They are at the point where their tremor is really affecting their quality of life,” said Safarpour, assistant professor of neurology in the OHSU School of Medicine.

The clinical team at OHSU has established a track record of experience and success with DBS since Burchiel established the program with the first U.S. clinical trial in 1991.

Renaud, the patient from Grants Pass, said his background as a retired orthopedic surgeon helped alleviate any reluctance he might have had to go through with the deep brain stimulation procedure. He first noticed his shaking almost 20 years ago, when a fishing buddy pointed it out.

“I just kind of ignored it for a while,” he said. “It was getting worse every year.”

Medication wasn’t relieving symptoms that had gotten bad enough that he couldn’t sign his name, let alone thread a fishing line through the eye of a hook. He became so frustrated that he did his own research to find a better treatment. He was first referred to neurosurgeons at Stanford University, who in turn referred him to Burchiel at OHSU.

Renaud, 79, remembers getting relief immediately after the surgery on Sept. 4.

For those who might view brain surgery as overkill, Renaud said the uncontrollable shaking had become an intolerable source of frustration and disability.

“When you’re an educated man, not being able to write can be humiliating,” he said.

He described the outcome of the surgery as “better than my best expectations.”

When Oscar La Salle learned about the procedure, his first instinct was to jump at the chance to calm the uncontrollable quavering of his hands.

"You can overthink it and miss out on leading a halfway normal life,” he said.

La Salle, 76, was diagnosed with essential tremor for more than a decade, in addition to his more-recent diagnosis of Parkinson’s. He said his Parkinson’s is manageable but the tremor had become unbearable, to the point that he couldn’t so much as eat a bowl of soup. He stopped going out to restaurants and stopped socializing out of embarrassment.

Nonetheless, brain surgery is no small thing. It requires placing twin electrodes in the brain, attached to a cable running through the neck, to a small generator implanted in the chest. La Salle consulted with his family before deciding to go through with the procedure.

“You’re not cavalier about it,” he said.

He has been amazed by the difference. Now retired as a marketing and sales specialist who spent his career traveling across Asia, he says he’s regained his confidence and zest for life. He can go out to eat without a second thought, he drives himself back and forth from California, and he’s planning to resume flying as a private pilot.

He’s making plans for a cross-country road trip with his two grandsons this summer: Through the East Coast, including his hometown of Brooklyn, across the south and finally back along the West Coast.

“It’s a different world, like a new life,” he said. “It’s unbelievable.”

Paul Renaud of Grants Pass, Oregon, who lived with essential tremors, is back to fishing thanks to the surgical implantation of a directional electrode in his brain. (Photo courtesy Paul Renaud)