Interviews provide important interpretive data, including the “why” behind what’s happening
By Casey Williamson May 07, 2021 Portland, Oregon 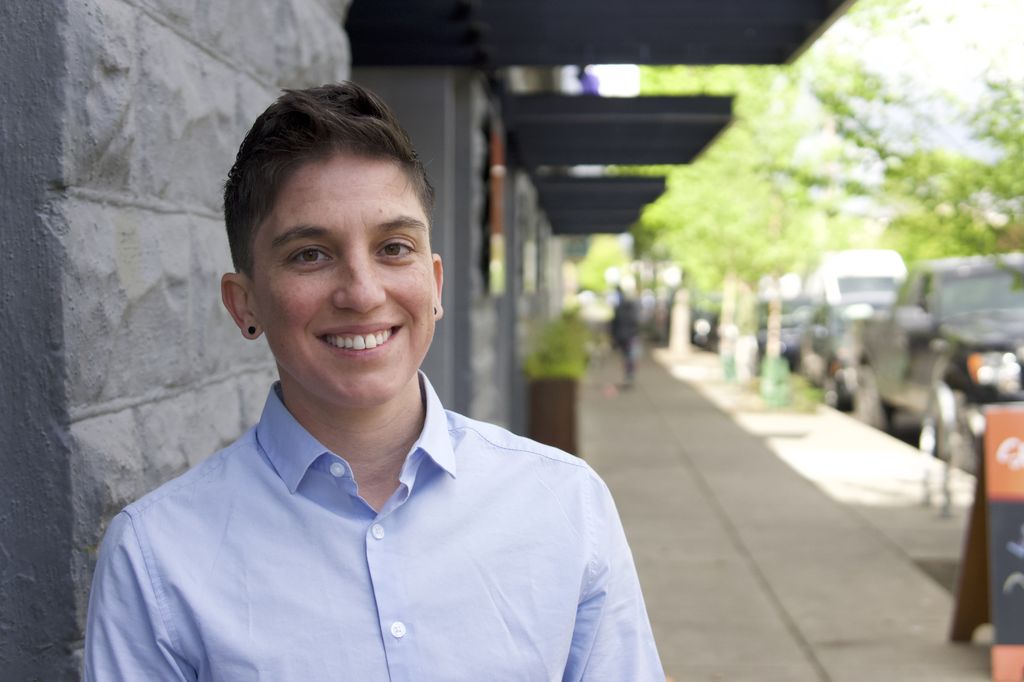 Jae Downing, Ph.D., is using methodologies that avoid erasing transgender and gender diverse people from research. That includes an inclusive approach to study design and conducting research in ways that reflect the needs and issues of sexual and gender minorities. (OHSU/Casey Williamson)

Not long ago, most of the research on sexual and gender minority health was conducted using convenience sampling, for instance in bars or at Pride parades. With that methodology, you’re going to get a very biased sample.  Unsurprisingly, research conducted on people in bars and parades demonstrates that they drink a lot and like to parade. This, however, is less about sexual and gender minorities than it is about conducting research in a bar or an event.

“National data, or administrative data like birth certificate data or claims data, is so useful because it provides a more complete picture — it’s an image of the full population,” said Downing, assistant professor in the OHSU-PSU School of Public Health. “We can say something about what’s truly happening without worrying about self-reported bias.”

Mixed methods research: By us and for us

A mixed methods approach, where qualitative data like interviews and questionnaires are used to shed light on the numerical data, can yield a more complete picture, a more human picture than is possible with just numerical, or quantitative, data.

Downing’s community at OHSU, and Portland’s transgender and gender diverse community, have made sense for Downing’s research. They consider John McConnell at the Center for Health Systems Effectiveness an important mentor, particularly for his expertise with the Oregon’s Medicaid Program. An added bonus has been the opportunity to work and become friends with people in the Transgender Health Program — Amy Penkin, Geolani Dy, Kara Connelly, Christina Milano and others across OHSU.

Recently, Downing was writing a paper on surgery with Dy, an assistant professor of urology, and doctoral student Kimberly Yee, and they found that the hair-removal process prior to surgery — a required step — creates a roadblock that can push the wait time for surgery up to two years. When the Oregon Health Plan began covering hair removal —more than a year after gender-affirming surgery received coverage in 2015 — there were no approved providers. This acute problem persists today.

Listening to the community during the course of this research resulted in a January 2021 JAMA Dermatology paper.

“We need more than good data to really understand what is happening,” said Downing. “In one study, we find trans women and trans men in Oregon’s Medicaid program are using PrEP, an HIV prevention intervention, at much higher rates than cisgender people, or people whose gender identity matches their sex assigned at birth. The data also showed that trans women have lower adherence to PrEP, but we can’t answer with this data is why — what is coming up for folks?”

Social justice and science are intertwined for Downing. Solid information, including whether coverage of gender-affirming care is cost-effective in the long run, can have important policy implications.

“The cost of no coverage is high — rates of suicide are so high, as well as depression and substance use,” said Downing. “And we’re essentially giving people care that they deserve. Hormones are very cheap and they can change people’s life, including providers’ lives, who I believe care strongly about their patients.”

Downing is committed to social justice, and believes good science is one important trajectory of achieving that justice.

Jae Downing, Ph.D., is using methodologies that avoid erasing transgender and gender diverse people from research. That includes an inclusive approach to study design and conducting research in ways that reflect the needs and issues of sexual and gender minorities. (OHSU/Casey Williamson)