Understanding pollution from the gene’s perspective 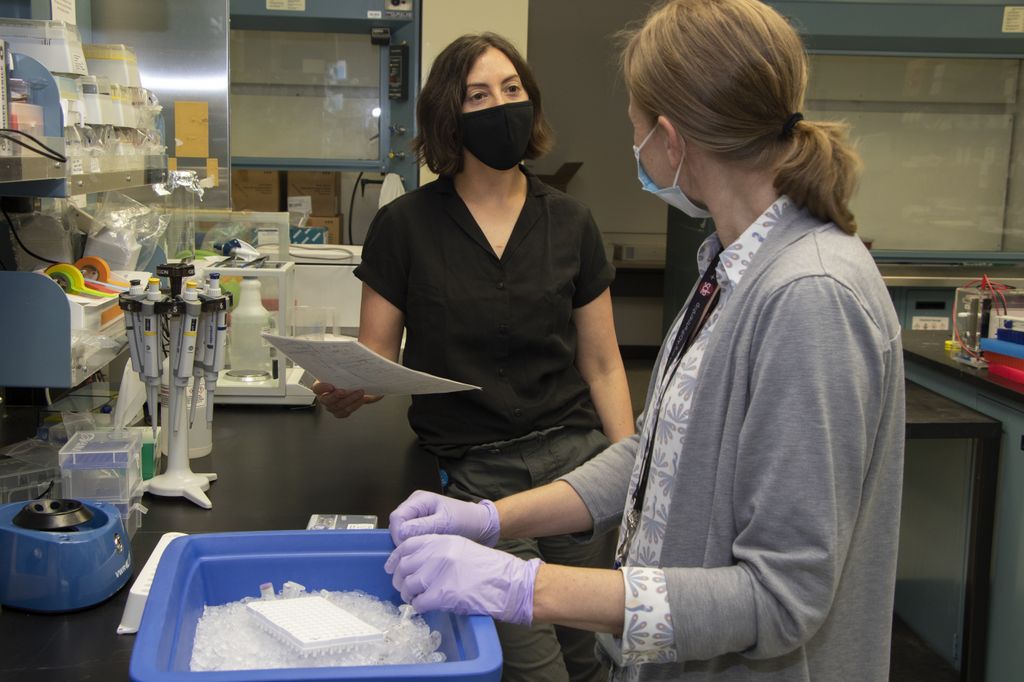 Caren Weinhouse, Ph.D., speaks with Nicole Pelletier, B.S., at the Weinhouse Lab, which is part of the Oregon Institute of Occupational Health Sciences at Oregon Health & Science University. (OHSU/Josh Andersen)

It’s generally understood that being exposed to environmental pollutants can harm human health, but it’s not always clear exactly how that happens.

That’s where environmental epigenetics researcher Caren Weinhouse, Ph.D., M.P.H., comes in. She delves into the details of how pollutants such as heavy metals, air pollution and endocrine-disrupting chemicals can trigger changes to the human epigenome, or the vast collection of proteins and chemical compounds that attach to our DNA and tell genes to either turn on or off.

In 2010, the burgeoning field of epigenetics was prominently displayed on the cover of TIME with this memorable headline: “Why your DNA isn’t your destiny.” Since then, the field has grown substantially in stature for both the scientific community and the public’s imagination. But Weinhouse specializes in an understudied corner of environmental epigenetics that looks at the specific steps and tiny biological parts involved in making changes to the human epigenome. 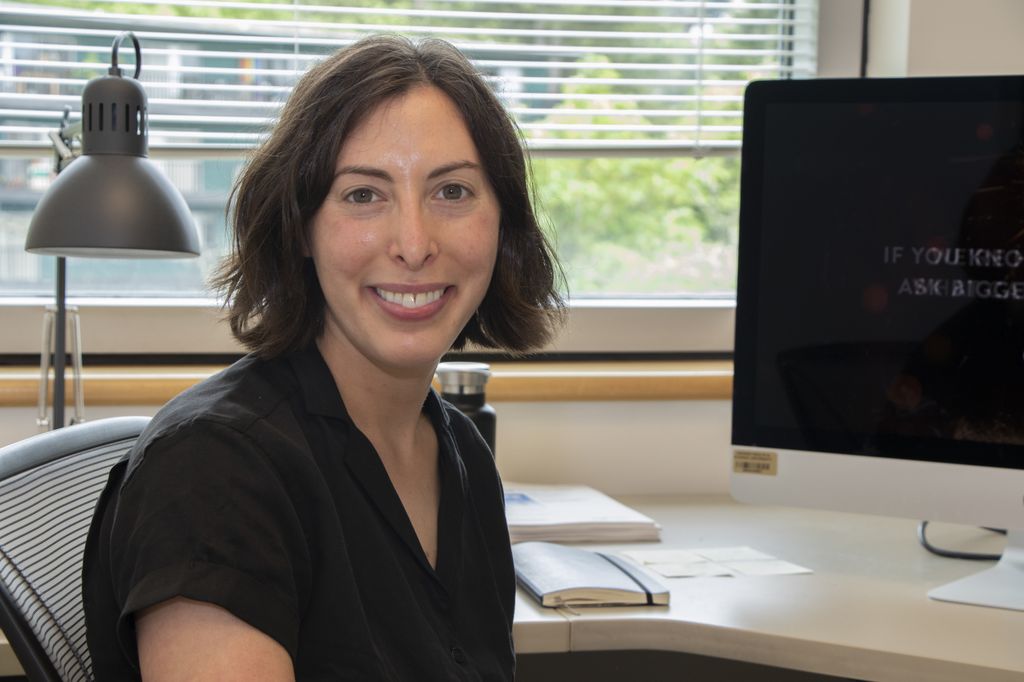 “The piece that’s missing is the mechanism,” said Weinhouse, an assistant professor in the Oregon Institute of Occupational Health Sciences at Oregon Health & Science University. “How does exposure to an environmental pollutant actually cause changes to the epigenome? We don’t know. We are only beginning to have the tools we need to help us explain this. And without understanding the mechanism, we’re not going to be able to mitigate or prevent environmental health impacts of these epigenetic changes.”

When the complete human genome was sequenced for the first time in 2003, Weinhouse was in the middle of her undergraduate studies and “it was an exciting time to be thinking about DNA,” she said. Although she initially leaned toward practicing medicine, she later realized her true calling was in basic science, as she loves to figure out how things work.

Weinhouse also sees her research as enabling social justice. Some environmental pollutants – such as the lead that’s often found in the paint or pipes of older homes, or the methyl mercury used in small-scale, unregulated gold mining – impacts some groups of people more than others. Weinhouse hopes her epigenetic discoveries will lead to new ways of understanding the role that environmental exposures play in chronic disease disparities. 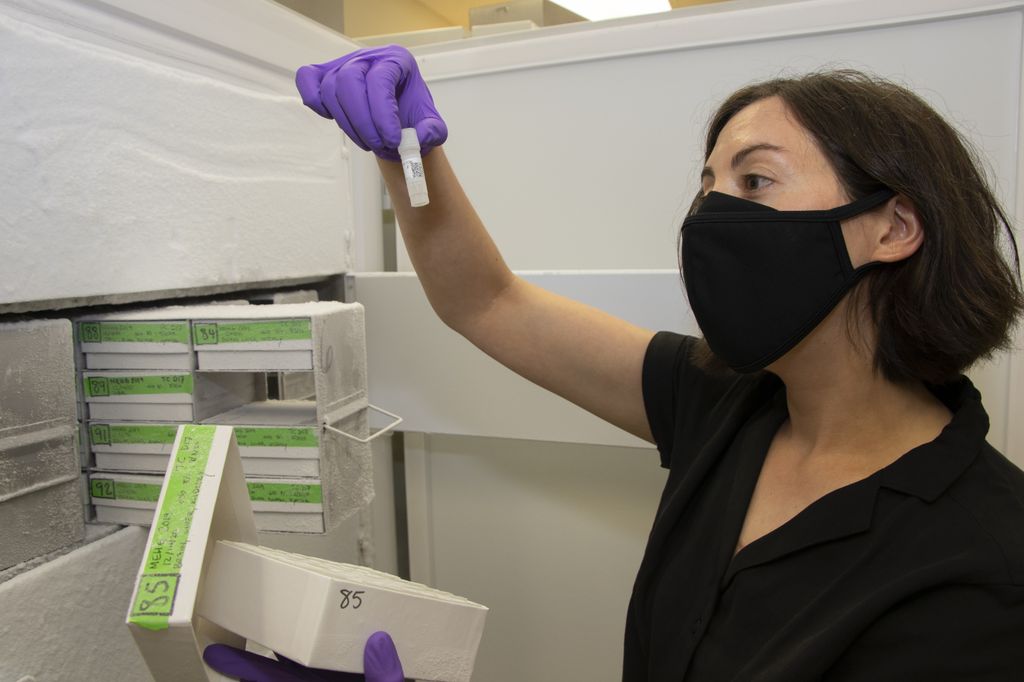 Caren Weinhouse, Ph.D., examines a sample in a freezer at her research lab, which is part of the Oregon Institute of Occupational Health Sciences at Oregon Health & Science University. (OHSU/Josh Andersen)

For one project, her team is exploring how repeated contact with various environmental pollutants can affect the epigenome. Weinhouse wants to know if genes involved in cellular stress responses increase or decrease expression after recurring contact, and if they might become hyperactive or numb to such stimuli over time. Weinhouse said this knowledge will be key to grasping how the total burden of environmental exposure can contribute to a person’s disease risk.

Some scientists gradually migrate from the bench to the office as their careers advance, but Weinhouse has no intention of leaving lab research behind. She plans to continue filling in her lab notebook with data for some time to come.

“The fun part of doing science is doing science,” she said. “What we do in the laboratory is make new knowledge. It’s just an incredibly cool thing to do, and I feel lucky that I get to do it.”

Caren Weinhouse, Ph.D., examines a sample in a freezer at her research lab, which is part of the Oregon Institute of Occupational Health Sciences at Oregon Health & Science University. (OHSU/Josh Andersen)

Caren Weinhouse, Ph.D., speaks with Nicole Pelletier, B.S., at the Weinhouse Lab, which is part of the Oregon Institute of Occupational Health Sciences at Oregon Health & Science University. (OHSU/Josh Andersen)