Something to hold onto 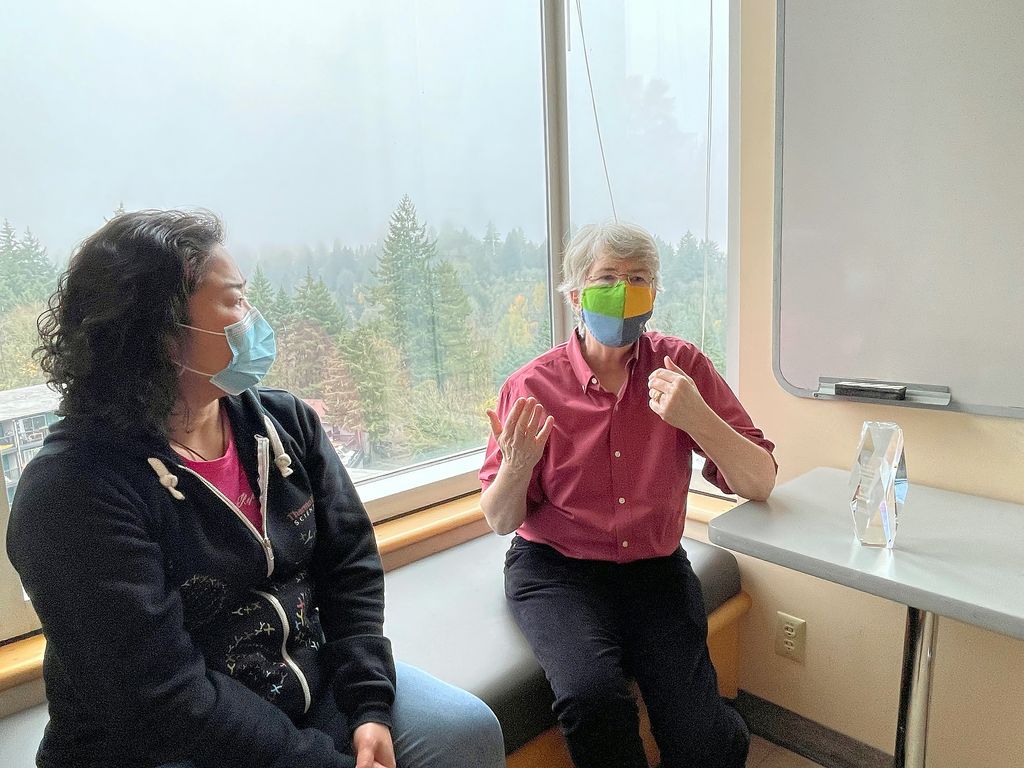 Susan Hayflick, M.D., was early in her career as a molecular geneticist at Children’s Hospital of Buffalo, New York, when she met the family that would chart the course of her career.

The couple had four daughters between the ages of 5 and 10. Three of the girls had a neurodegenerative disease impacting their ability to walk, see, speak and swallow, plaguing them with severe muscle spasms to the point of breaking bones.

“I can remember that day like it just happened, but it was 30 years ago,” says Hayflick, now professor and chair of molecular and medical genetics, Oregon Health & Science University School of Medicine.

Like any children, these girls just wanted to play. But their bodies were twisted from their disease. Reaching for toys was a chore, yet they persevered. Wearing simple, beautifully crafted Amish cotton dresses, these girls hooked Hayflick. She knew that with blood samples from this one family, she could find the gene causing their disease.

In 1993, Hayflick brought her drive to understand what was wrong with the girls, why and how to fix it all the way across the country to OHSU, where she accepted a faculty position. In the decades since, she and her team not only identified and named the disorder -- Pantothenate Kinase-Associated Neurodegeneration, or PKAN – but have done so for five other related neurodegenerative diseases.

On Nov. 18, 2021, Global Genes, an international foundation for the pursuit of rare disease treatments, selected Hayflick for the Rare Champions of Hope Award in Medical Care and Treatment, beating out scientists at Columbia, Yale and Emory, among others. There was an in-person ceremony with a blue carpet entry in Philadelphia, fine food, live music, video tributes, the works. View the Hayflick tribute.

For Hayflick, who attended virtually in her trademark Columbia Sportswear fleece, it was a recognition not only of her work but that of her team and the hundreds of OHSU scientists who toil in rare diseases from Fanconi anemia to many of the eye diseases benefiting from gene therapy research conducted at the OHSU Casey Eye Institute. Theirs can be a lonely pursuit, outside the limelight and the natural professional camaraderie of more common diseases like cancer and Alzheimer’s.

“OHSU is a sleeping giant in rare diseases,” said Hayflick. “The challenge is that we tend to work alone. I don’t go to a journal club with [nephrologist] David Ellison, but we are both rare disease specialists. OHSU has never been out heralding this expertise, but we are the go-to place worldwide for many of these disorders.”

The trail to identifying and seeking treatments for these rare neurodegenerative disorders began with their link to an accumulation of iron in the brain.

As Hayflick established her OHSU lab, scientists and physicians around the world who knew she was studying an iron-related disorder began sending samples. Hayflick chuckles that she used to discourage colleagues because she was only interested in the one disorder affecting the Amish family and handling all the samples was a lot.

But her team, including Allison Gregory, M.S., CGC, adjunct assistant professor of molecular and medical genetics, and Penny Hogarth, M.D., professor of molecular and medical genetics, built a repository of hundreds of samples that led to a remarkable outcome: their identification of related but unique diseases that they named PLAN, BPAN, FAHN and MePAN.

Hayflick remembers in 1998 gazing out the window of her office in Richard Jones Hall at the hawks gliding in the thermals when she landed on the simple over-arching name for these iron-linked disorders: neurodegeneration with brain iron accumulation, NBIA.

“At that point, we had not identified the actual precise gene in the genome, but we had mapped it, so the next step is to contact the Human Genome Nomenclature Committee,” said Hayflick. “Neurodegeneration with brain iron accumulation doesn’t roll off tongue, but it’s precise and descriptive. It’s an easy connection to make if you are a neuro person.”

“The tough part of BPAN is that just when families have made their peace with having a child who is different, they learn of the neurodegeneration and Parkinsonism that takes hold in early adulthood in most people with BPAN. Though BPAN is an ultra-rare disorder, if someone in your family has it, it becomes your whole world,” Hayflick said. “The consensus management guideline is the ‘gold standard’ for helping health care providers and families take care of people with BPAN. OHSU is the destination worldwide for care of people with BPAN and for BPAN research. We are really proud of this work.”

Hogarth, Gregory, Hayflick and team are also in the midst of a clinical trial of PKAN with 65 patients of all ages and stages of the disease from North America.

People with PKAN lack a chemical necessary to metabolize a vitamin. Without normal levels of this metabolite, part of the brain degenerates. Hayflick’s team, working with Dutch collaborators, discovered a compound that when tested in mice and human cells, corrects abnormalities that cause the disease.

Despite supply chain and shipping challenges to get the compound to the patients during the pandemic, the first set of participants are completing the two-year trial and Hayflick expects to have data in 2022.

For Hayflick and colleagues treating and researching rare diseases, the patients and their families are their fuel. Though all three of the Amish girls have died, Hayflick was able to tell their parents that their one unaffected daughter was not a carrier and so would not pass the mutation on to her children, ending the disease in that family.

“It started in a personal way for me, and it’s always stayed personal in that I have very deep connections to the families. I talk with them, email with them,” Hayflick said. “I know we have so much work left to do, and I can tell them here’s what is happening with our research. For them to know that there is somebody out there spending all their waking hours thinking about their rare disease, it’s a touch point. It gives them something to hold on to.”

Susan Hayflick, M.D., professor and chair of medical and molecular genetics, (back row, fourth from left) and her lab in their zebra-print scarves, including Suh Young Jeong, Ph.D. (back row, third from left); Penny Hogarth, M.D. (middle row, fourth from left) and Allison Gregory, M.S., CGC (first row, third from left). The zebra print is associated with rare disease research when rare disease scientists hear hoofbeats, rather than horses, they think of zebras. (Courtesy photo, 2019)

Carter Anderson of Butte Falls, with his mother Courtney (center) during an appointment at OHSU with Dr. Susan Hayflick in 2017. Carter was diagnosed with PKAN - Pantothenate Kinase-Associated Neurodegeneration, a genetic disease which affects his ability to walk, talk, eat and control basic movements. (OHSU/Kristyna Wentz-Graff)