The first female neurosurgeon in Croatia, Nikolina Sesar brings her tenacity, advocacy, fascination with the brain to her fellowship at OHSU
By Erin Hoover Barnett January 03, 2022 Portland, Oregon 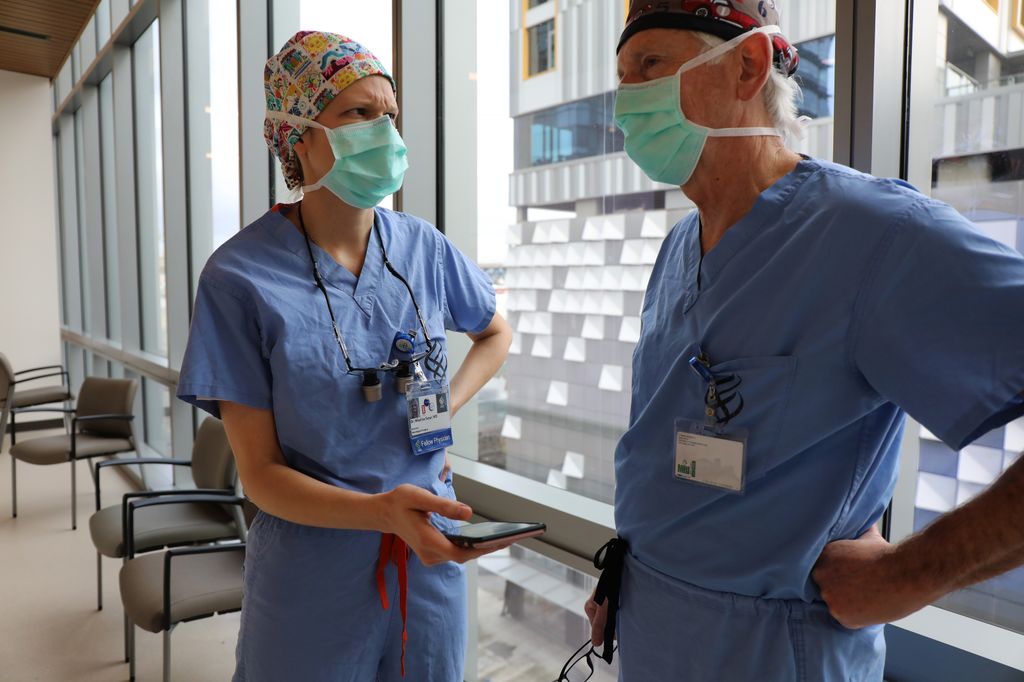 Nikolina Sesar, M.D., an OHSU neurosurgery fellow, and her mentor Kim Burchiel, M.D., professor of neurosurgery, in between cases on a recent Friday. As the first female neurosurgeon in Croatia, Sesar realized that part of her purpose is encouraging women and others who are under-represented in medical fields. (OHSU/Christine Torres Hicks)

That Nikolina Sesar became a doctor was not surprising. Her mother is a doctor. So are her uncle and two of her cousins. But a brain surgeon, as a female, in her little southeastern European country of Croatia? That was a first.

“The human brain is the most interesting part of the human body,” says Sesar (pronounced SESS-are). “And why neurosurgery? Because I wanted to do something with my hands. I am a very practical person. My only philosophy was I want to do something that is intrinsically interesting to me.”

Sesar is one of four fellows in the OHSU School of Medicine’s Department of Neurosurgery. She possesses that discerning, survival-of-the-fittest instinct that is characteristic of a small, strife-forged country in which you must identify what you are good at at a young age and stride toward that light -- the decision in Croatia to go to medical school is made at age 17.

“The only means of trying to advance is for me to study more, do more exams, see more patients, try to fight using the power I do have,” she said, noting that as an intern, she performed 450 neurosurgeries in the first year and spent a part of her residency in northern France where she had her first experiences with new approaches to neurosurgery.

She took not only the European Neurological Society board exam but the U.S. Medical Licensing Exam, which meant going back to learn the basics at the age of 35 with two young children after already being licensed to practice in Croatia.

When she passed her neurosurgery boards in Croatia, becoming the country’s first female neurosurgeon, the local media caught wind. She was an overnight a sensation.

She appeared in Croatian and Bosnian journals and magazines and television news, talk shows and documentaries, as well as in the international neurosurgery press. And she was invited to give a TED Talk, in which she plunges her gloved hands into a big specimen jar and scoops up a real human brain.

At first, she shunned the attention. But she came to realize that this was part of her purpose.

“It’s not enough just to quietly fit in,” she said. “I need to encourage others to do it, not just for women, but also for all of the people who are under-represented. I’ve suffered imposter syndrome for so long. I have to share my experience and help others fare better.”

She learned to shrug off her discomfort in environments where the women were the nurses and the men were the doctors, and she was not just the only female but the youngest of the neurosurgeons.

“I met with some prejudice from patients,” she said. “And when I deal for the first time with a male neurosurgeon, they expect a tall, very strong guy and then it’s me. But it’s fine.”

Kim Burchiel, M.D., professor of neurosurgery, OHSU School of Medicine, learned about Sesar from his contacts in Croatia – and from the media coverage. Burchiel has had more than 50 fellows in the last three decades and worked to bring Sesar to OHSU for several years before he succeeded.

"Nikolina is a remarkable person for what she has achieved as a neurosurgeon in Croatia,” he said. “Croatia is still striving to incorporate the latest neurosurgical technologies and procedures. Most of what Nikolina has seen here is simply not practiced in Croatia, which affords the opportunity for her to bring back valuable knowledge and skills to her home country.”

Sesar admires Burchiel’s “spontaneous bursts of knowledge” and his willingness to teach.

“You can be the best professor in the world, but if you don’t want to share this knowledge … . For him, there is this genuine care for people who are just starting in neurosurgery,” she said. “I was never guided in this way; I had to do things on my own.”

Sesar also credits the support of her family, who joined her in the U.S. She says her children, Dante, 5, and Angelina, 2, taught her about patience and selflessness, and her husband Vedran Sesar, a highly accomplished electrical engineer, encouraged and supported her.

She sees so much in the U.S. and at OHSU that she loves.

“Being a doctor here is the best job in the world,” Sesar said, noting the many opportunities for research and to take on challenging cases, a recipe for professional satisfaction.

But the most compelling assets she has experienced at OHSU is “this remarkable culture of inclusion and this genuine care for the weak and the underrepresented,” she said – that and kindness.

She recalls her surprise at a Chair’s Message from Nathan Selden, M.D., professor and chair of neurosurgery, OHSU School of Medicine, during the delta variant surge in fall 2021, acknowledging the strain.

“Your energy and dedication are boundless,” Selden wrote. “I know you will sacrifice for patients. While sacrifice in the moment where safety or outcome are at stake is a hallmark of neurosurgical programs and professionalism, even in these times, please do not sacrifice yourselves, your families, and your wellness on an ongoing basis. Please reach out, I mean it. We all want to help.”

“It means so much to know that someone is telling me, ‘It’s OK. Everyone is struggling,’” Sesar said. “If it comes from your boss, it’s really comforting. I’ve never had that before.”

Nikolina Sesar, a neurosurgery/emergency medicine fellow who is from Croatia, is the first female neurosurgeon in that country. She is learning under Kim Burchiel, M.D., professor of neurosurgery in the OHSU School of Medicine. (OHSU/Christine Torres Hicks)

Nikolina Sesar, left, a neurosurgery/emergency medicine fellow who is from Croatia, is the first female neurosurgeon in that country. She is learning under Kim Burchiel, M.D., professor of neurosurgery in the OHSU School of Medicine. (OHSU/Christine Torres Hicks)

Nikolina Sesar, M.D., an OHSU neurosurgery fellow, and her mentor Kim Burchiel, M.D., professor of neurosurgery, in between cases on a recent Friday. As the first female neurosurgeon in Croatia, Sesar realized that part of her purpose is encouraging women and others who are under-represented in medical fields. (OHSU/Christine Torres Hicks)