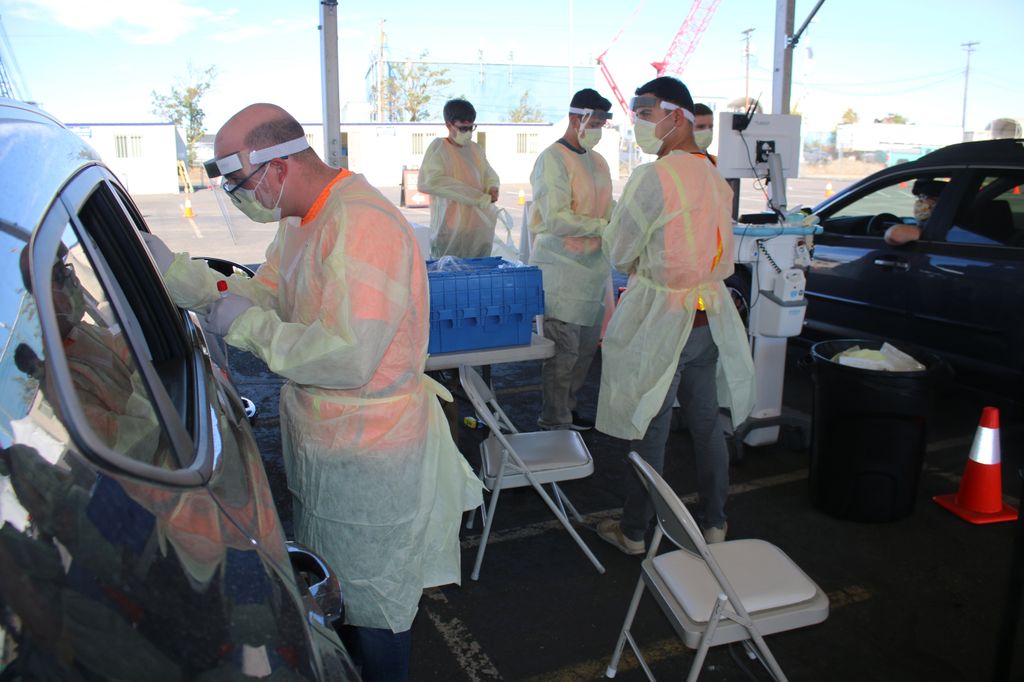 People line up in their vehicles to get tested for COVID-19 at OHSU's drive through event at the Portland Expo Center in September. This week's projection comes amid a sharp increase in reported infections over the past week, especially in the Portland metro area, according to OHSU's Peter Graven, Ph.D. (OHSU/Erik Robinson)

An updated projection continues to show the number of Oregonians hospitalized with COVID-19 will well exceed the previous pandemic peak from the delta surge in September, according to a new projection from Oregon Health & Science University.

The projection stays almost exactly the same as last week – forecasting a peak of about 1,650 people hospitalized by the end of January.

The projection comes amid a sharp increase in reported infections over the past week, especially in the Portland metro area, although the forecast does draw upon new data showing Oregonians are increasingly heeding public health advice to wear facial coverings, refrain from gathering in large groups and increase the number of people getting booster vaccinations.

People who are already vaccinated can help to prevent the spread of the virus by adhering to public health measures over the next few weeks.

“Anything Oregonians can do now to reduce the spread of the virus will help to preserve hospital capacity for those who need it most,” said Peter Graven, Ph.D., director of the OHSU Office of Advanced Analytics. “If we can spread the peak out over two months rather than just a few weeks, it will help ensure Oregonians get the timely hospital care they expect and deserve.”

The latest forecast calls for the peak to hit around Thursday, Jan. 27, followed by a sharp drop in hospitalizations as the virus finds fewer people who have not already been recently infected or vaccinated. A steep drop-off in cases has been reported in South Africa, where the omicron variant was first confirmed in late November. The drop-off may be somewhat slower in Oregon as the virus spreads to older age groups and more rural areas.

The forecast incorporates new data showing an increased ability for the virus to evade immune protection among people previously infected or vaccinated.

Omicron appears to cause a lower overall rate of severe illness than the previously dominant delta variant, however its rapid spread combined with its ability to evade previous immunity is already driving an unprecedented number of daily infections in Oregon.

Hospitalizations are also rising with a total of 523 Oregonians in the hospital for COVID-19 as of Thursday, Jan. 6, according to the latest figures from the Oregon Health Authority.

It will remain crucial for Oregonians to do what they can to reduce the spread of infection by refraining from indoor gatherings, wearing masks in indoor public places and getting vaccinated or boosted as soon as possible. As with the beginning of the pandemic, the goal is to reduce the number of Oregonians who need hospital care all at the same time.

The updated forecast draws on data indicating that Oregonians are indeed responding by modifying their behavior to limit the spread of the virus.

OHSU is providing resources for those seeking a test and vaccine. Those who experience symptoms, or test positive, should first call their health care provider before seeking care in a hospital emergency room. OHSU has also established a toll-free hotline for people anywhere in the state to seek guidance about symptoms and care for COVID-19. Oregonians can call 833-OHSU-CCC (833-647-8222) seven days a week between 8 a.m. and 8 p.m.

This week's projection comes amid a sharp increase in reported infections over the past week, especially in the Portland metro area, according to OHSU's Peter Graven, M.D. (OHSU/Erik Robinson)