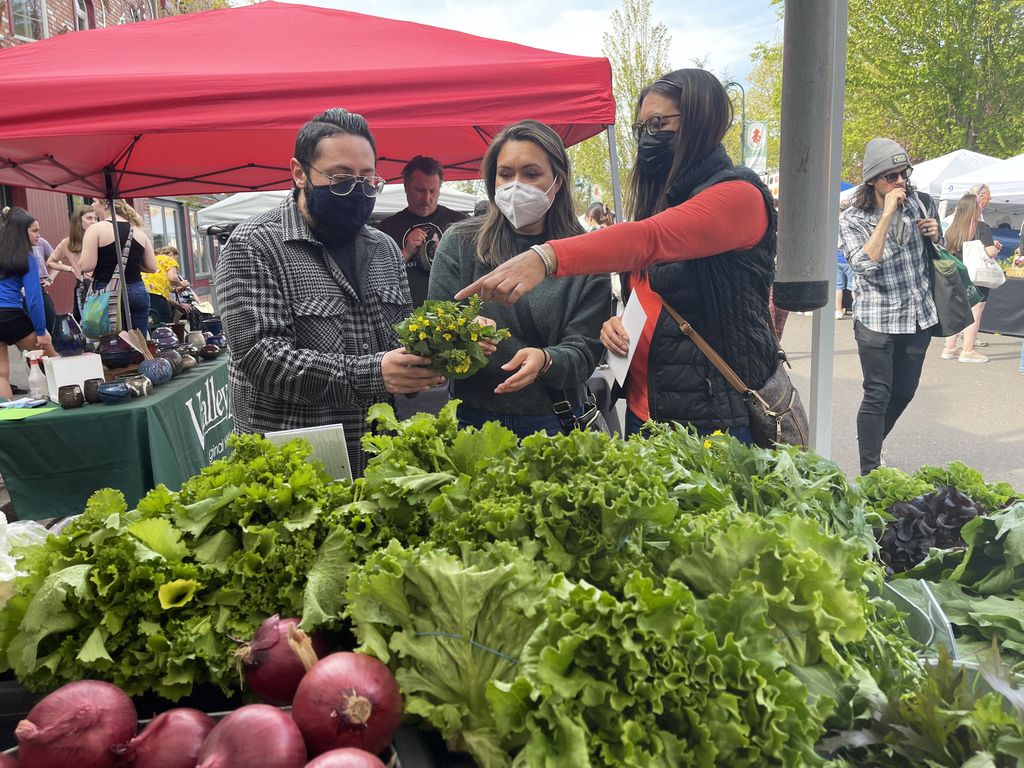 Growing up in rural Yakima, Washington, Esteban Garza, M.D., set his sights on becoming a doctor because he could see the difference he could make. Inquisitive and smart, outgoing, and fluent in Spanish and English, he imagined using his medical training not just in the clinic, but also in the community to improve health.

He was accepted to the OHSU School of Medicine M.D. Class of 2021, and after graduating last summer, landed a residency in OHSU’s new Hillsboro Medical Center (HMC) Family Medicine Residency Program -- a dream come true. Residents are newly minted physicians honing their skills before working independently. Though a major suburb of Portland, Hillsboro’s deep roots as an agricultural community remain, and for Garza, the large Latino community was an additional draw.

Now, when not seeing patients at HMC, Garza has begun leading health education sessions with Spanish-speaking community members through a partnership that the residency program developed with Adelante Mujeres, a nonprofit providing holistic education and empowerment opportunities to low-income Latinas and their families.

As OHSU expands residency programs across the state and works to further diversify the physician workforce through the 30-30-30 initiative, which was funded by the Oregon Legislature in spring 2022, the HMC Family Medicine and Internal Medicine residency programs are examples of the positive impact residents can have in a community.

Nordling first met Garza on a family medicine rotation as an OHSU medical student. With his sharp skills, community-mindedness and easygoing, compassionate nature, she knew she wanted him in the new residency program. His ability to communicate fluently in Spanish with patients was a bonus, given roughly 24% of Hillsboro’s population identifies as Latino/a/x.  Four of the 16 residents in the first cohorts of the Family Medicine and Internal Medicine residency programs speak Spanish, and the programs provide access to an online medical Spanish course for all residents.

“Building a new residency program with trainees who reflect the community sparks a connection that encourages them to take on projects they are passionate about and make a positive impact in patients’ lives,” says Nordling.

Ricci adds: “These are huge benefits to the community. Part of learning medicine, which is key, is recognizing all of the social and structural factors that influence a person’s health. With this awareness, there's so much more space to be creative and use a wider lens and for residents to lean into the areas that hold the most meaning for them."

The OHSU School of Medicine is in the midst of a 10-year expansion in medical residency programs across Oregon. It began with the Hillsboro programs, and this summer adds its first cohort of transition-year residents, who are training in specialties such as radiology, radiation oncology, dermatology and anesthesiology. Hillsboro Medical Center is a part of OHSU Health.

A partnership with St. Charles Health is expected to yield its first Central Oregon residency program — in family medicine — beginning in 2024, with first-year residents training at OHSU, and then dispatching to Madras for years two and three. More programs in partnership with St. Charles Health are expected to follow, says Jim Anderson, M.D., director of the Statewide Graduate Medical Education initiative in the OHSU School of Medicine.

OHSU also is partnered with the University of California, Davis, on a $1.8 million American Medical Association-funded project to bring hundreds of medical students and residents to train under faculty and community physicians in rural and underserved communities throughout Oregon and Northern California.

The goal is to build on the success of the OHSU and Sky Lakes Medical Center Cascades East Family Medicine Residency program, founded in 1993. It trains 24 family medicine residents each year in Klamath Falls.

Why not take our services to them?

Olives Nguyen, M.D., a first-year resident in the inaugural class of the HMC Internal Medicine Program, remembers staffing a hepatitis C screening clinic a few months ago, and noticing how few people had shown up to get screened.

Stepping outside the main doors of the hospital that day, Nguyen realized that the Washington County Jail was just a block away. Adults in custody are at higher risk for ailments like hepatitis C, which is contracted through blood-to-blood contact, such as sharing injection equipment. Hepatitis C is a viral infection that affects the whole body, especially the liver, and often leads to cirrhosis — irreversible liver damage — or liver cancer.

So Nguyen posed the question to program leaders: Why not take hepatitis C education and screening services into the jail?

“It’s a silent disease that doesn’t manifest itself with all of its complications until years later, until it is too far progressed,” Nguyen says. “You have to do extensive education to explain it. Being able to give this knowledge to adults in custody so they can make informed choices to get tested and, if positive, treated, could be really powerful. Hopefully, it would improve their health down the line.”

Now Nguyen is joining with Hunter Spencer, D.O., assistant professor of medicine (general internal medicine and geriatrics), OHSU School of Medicine, who also sees patients at HMC, to look into the feasibility of a partnership with the jail.

“This is a good example of having residents in a community hospital just activating that energy,” Spencer says. “They’re not as aware of all the barriers and slow-down in the system, and they think things can just happen easily and with that, you get the catalytic force to accomplish something that hasn’t been done before.”

“Having the support of a medical expert in our health and nutrition sessions is so valuable to our program and its participants,” Hernandez says. “Dr. Garza’s expertise and culturally responsive way of presenting is impactful to the work we are doing in health equity.”

Gloria Lopez, a community member who participated in the session, took away some action steps.

“I learned about how nutrition is important in diabetes, cancer and hypertension prevention,” Lopez says. “Small day-to-day changes like picking up fresh fruits and vegetables, lean meats, brown rice and limiting processed foods and salt will benefit my entire family.”

And for the medical residents like Garza and Nguyen, it’s not about lecturing patients. It’s about learning from them.

After the education session, Garza met Hernandez and Lopez on a sunny April evening at the Forest Grove Farmers Market that Adelante Mujeres hosts. They toured the produce stands and gave him an impromptu lesson on how to prepare rapini, a green, leafy vegetable with yellow flowers, all of which can be eaten.

“The opportunity to be part of jump-starting a partnership that will help us get to know community members, listen to their stories, and better understand their needs is so powerful,” Garza says. “Just visiting the farmer’s market and understanding what kinds of foods community members have access to is helping me when I make diet recommendations for my patients. And having Gloria and Mayra share their expertise on cooking rapini, which I’ve never tasted, was a bonus!”

Olives Nguyen, M.D., a first-year internal medicine resident at the new Hillsboro Medical Center/OHSU School of Medicine Internal Medicine Residency Program, noticed that the Washington County Jail is a block away from the medical center and began looking into how the program and HMC might partner with the jail on health education and screening. (OHSU/Erin Hoover Barnett)