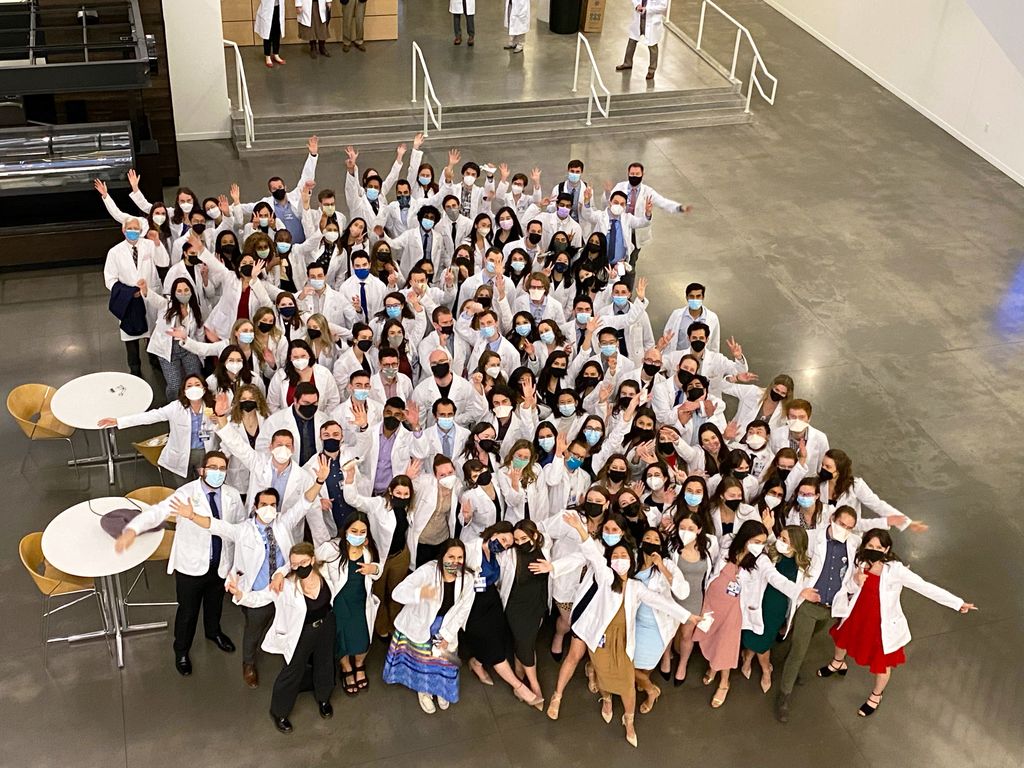 Following a three-year pause due to the coronavirus pandemic, the OHSU School of Medicine is renewing its tradition of welcoming its newest group of medical students on Friday with a ceremony where they symbolically slip on their white coats for the first time.

"This ceremony is a remarkable rite of passage,” David Jacoby, M.D., interim dean of the OHSU School of Medicine. “It's the moment when students cross over from the sustained effort of getting into medical school to actually joining an amazing group of peers and a team of faculty and staff who will now walk alongside them. For us at OHSU, this ceremony is about renewal of purpose, a reminder that we are not only here to advance health and care for our patients. We have the honor of nurturing the next generation of physicians.”

Reporters must R.S.V.P. by no later than 8 a.m. Friday to attend this ticketed event.

Of the 150 medical students who are starting this fall:

DETAILS: Allison Empey, M.D., an assistant professor of pediatrics in the OHSU School of Medicine, will deliver the annual J.S. Reinschmidt, M.D., lecture, which provides a special message to students.

Reporters who attend will be able to:

Interview members of the OHSU M.D. Class of 2026 (see profiles below) about their hopes and dreams for the future, and OHSU School of Medicine faculty about what these new students will experience while studying medicine at OHSU.

Take photos and record video of the White Coat Ceremony and students marking the beginning of their medical education, including ceremoniously putting on white coats and reciting the physician’s oath for the first time.

Reporters must R.S.V.P. by no later than 8 a.m. Friday to attend this ticketed event. To confirm attendance, contact Franny White at whitef@ohsu.edu or 971-413-1992.

As a lifelong athlete, Katelin “Kate” Ross, 36, has always been interested in health and wellness. But it wasn’t until just a few years ago that she realized medicine was her calling.

Her path toward medical school has been a winding one. After growing up in the Eastern Oregon town of La Grande, she earned a bachelor’s degree in radiologic sciences at Boise State University. Ross became an ultrasound technologist at St. Luke’s Medical Center in Boise, where the images she captured helped diagnose and manage health conditions.

“I love interacting with patients and being part of their joy, their sorrow and their journey as they try to understand what’s happening with their health,” Ross said of being an ultrasound tech, which she described as being a “catalyst” for recovery.

She later became a trainer for a medical equipment company, teaching ultrasound techniques to other health care workers. She also worked part-time as a Pilates instructor and used the anatomical knowledge she already had as an ultrasound professional to help her clients become physically fit and recover from injuries.

After Ross became pregnant, she leaned on specialist obstetricians to help her through a challenging birthing process, as the baby remained head-up, or breech, in her womb. These specialists, as well as the pediatrician who guided her family through early health challenges for their baby girl, grew Ross’s appreciation for the impact that physicians can make. After giving birth to a second child, Ross decided to pursue medicine in 2019.

Ross, her husband, their 6-year-old daughter and their three-year-old son moved to Portland a few weeks ago ahead of her starting classes at OHSU.

“I’m lucky to have an incredibly supportive husband and very resilient, awesome children who are down for this wild ride,” Ross said. “I could be bummed that it took me so long to get here. But the long path I’ve taken has informed who I am today and prepared me for this moment.”

Part of what motivates her today is a desire to help rural Oregonians live a healthier lifestyle. Recalling the two-hour-long drives her family used to take for her mother’s appointments with specialists when she was young, Ross knows there’s a need for more rural providers. As a medical student, she hopes to complete clinical rotations in La Grande and wants to support OHSU outreach to rural Oregonians.

After his family struggled to obtain health care due to financial, cultural and language obstacles, Jaime Contreras is determined to help underserved community members receive the quality and compassionate care that every human being deserves.

Contreras, now 29, and his two siblings were born in Los Angeles, after their parents came to the U.S. from Mexico as undocumented immigrants. Working as street food vendors and other jobs while also receiving public support, Contreras’ determined parents did whatever they could so he and his siblings could pursue better opportunities.

When he was 10 and his grandmother became ill, he and his family returned to Mexico so they could be with her during her last moments. Understanding their family’s struggles, Contreras and his older brothers decided to work so they could support themselves and their parents.

Contreras and his siblings are U.S. citizens, but a lack of immigration papers prevented their parents from going back to the U.S. At age 20, Contreras decided to return to California so he could pursue his dream of becoming a physician and break the barriers that held him and his family back. Soon thereafter, his brother followed and joined the U.S. Navy. Contreras and his brother eventually helped their parents obtain government approval to come to the U.S. as permanent residents. His younger sister also came to the U.S. and is now an undergraduate college student.

Contreras attended community college and then transferred to University of California, Los Angeles, where he became the first in his family to graduate college, earning a bachelor’s degree in biochemistry. He stayed at UCLA after graduation to be a research associate in a series of labs, where he helped other scientists study enzymes, mitochondria, metabolism and interactions between the heart and brain, a field known as neurocardiology.

The last lab where Contreras worked was led by Olujimi Ajijola, M.D., Ph.D., who simultaneously researches and treats patients with irregular heartbeats known as arrhythmias as well as issues related to neurocardiology. Inspired, Contreras expanded his career aspirations to become a physician-scientist like Ajijola.

“Earning both a medical degree and a doctorate degree means I’ll be able to care for patients while also advancing medical science, so patients can one day receive better treatments for their health conditions,” said Contreras, who is enrolled in the OHSU M.D./Ph.D. Training Program.

While he looks toward the future, Contreras also remembers the past. He recalls health care being challenging to access in both Mexico and the U.S. for family members with diabetes, cancer and mental health issues. Some couldn’t afford care, while others received care, but language or cultural differences meant they didn’t always understand what health care workers said during appointments.

“I’ve decided that I need to do something,” he said. “I want to provide care to people who are in need, and both my background and medical education will help me become the person that ensures patients seek, understand and receive cutting-edge medical treatments regardless of financial, cultural or language barriers. I am confident I can accomplish that at OHSU.”

‘We’ll be with you every step of the way’