‘We’ll be with you every step of the way’ 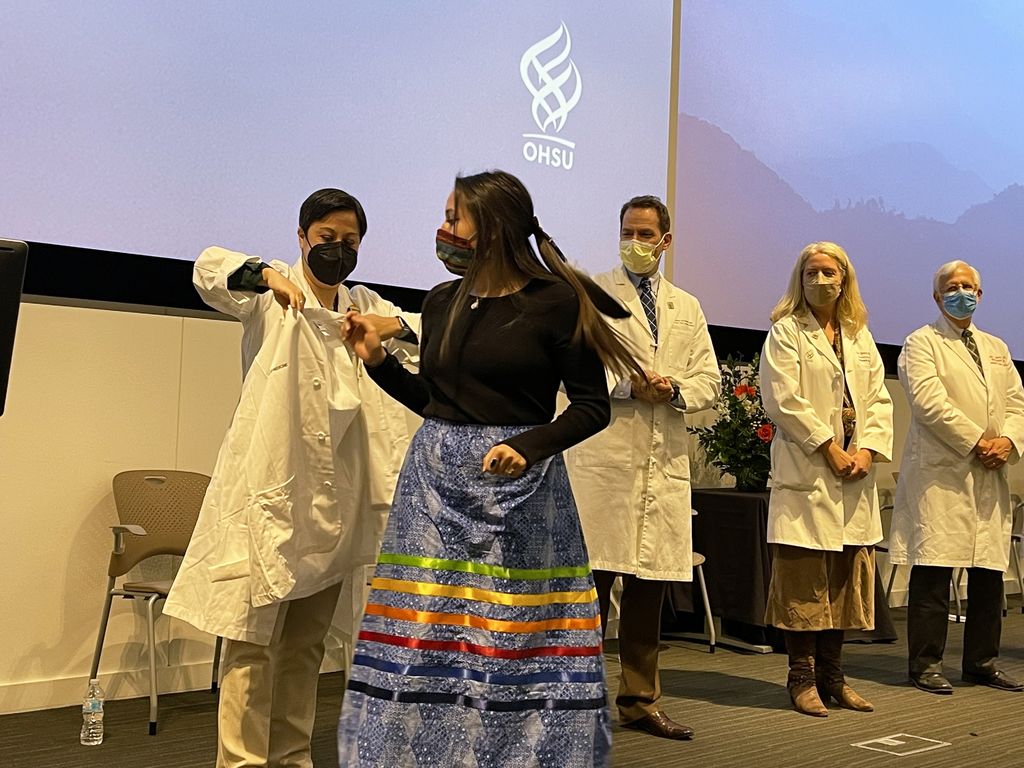 Gretchen Scholl, veteran medical school staff member, waded into the sea of students diligently attempting to fold and drape their white coats over their left arms for the procession into the Robertson Life Sciences Building auditorium Friday evening, Feb. 11.

“OK folks, here’s your folding lesson,” Scholl said like a favorite coach. “Hold it up and fold it in half from the back. Sleeve out to the left. Give it a little shake. Then bring the sleeve down and fold it over your arm. There you go!”

As the pandemic begins to wane, the White Coat Ceremony is back — the first of the major rites of passage in the medical school to return, with students in-person and loved ones watching via livestream.

“Wow, harder than Step 1,” cracked one student as he followed Scholl’s folding instructions, referencing the first medical licensing exam that some had just completed. No longer incoming students, they are midway through their second year and poised to start their clinical rotations.

The M.D. Class of 2024 entered medical school in August 2020, with the world reeling as the pandemic spread around the globe and dug in, pre-vaccine. The class’s first six weeks of instruction was entirely online, and then the students were only physically on campus for learning activities that required face-to-face contact, including practicing clinical skills like taking vital signs. They didn’t return to a limited number of in-person classes and small-group activities until August 2021. They had never been together all in one place until this ceremony.

“You began your medical education in a global public health emergency, the most uncertain of times — adapted to myriad and previously unheard-of changes in both your education and health care — and onward you continue, even now as the latest surge has us up against the ropes. We see what you have endured, and we hope today will be a worthy celebration of you and your accomplishments thus far,” said Whitney Black, M.D., associate professor of psychiatry, OHSU School of Medicine, and an educator, mentor and wellness adviser to medical students, who gave the J.S. Reinschmidt Lecture as part of the ceremony.

Channeling lessons that moved to front and center amid the pandemic, the racial justice movement and coming to terms with race-based health disparities, Black built her remarks around a study that found significantly reduced levels of anxiety in cancer patients whose oncologist ended their patient meeting with, “We’re going to be here with you. We’re going to go through this together. I’ll be with you every step of the way.”

She described the “crisis of compassion” that ensued amid the pandemic as people grew increasingly isolated and exhausted and interactions and academic instruction became virtual.

“It may be that the trails being blazed in this brave new world of virtual learning are sufficient to impart the knowledge needed to graduate and become fully licensed and competent physicians, but there is so much more to becoming a good doctor,” she said. “What if the ingredient was that something … that has been truly tested these past few years. What if it was simply compassion?”

Wrapping up her remarks, she said, “Going back to the story I started with, I want to say to you: ‘We’re going to be here with you. We’re going to go through this together. We will be with you every step of the way.’”

Interim Dean David Jacoby, M.D., echoed her message in his welcome to the students.

“The first time you see a patient with pulmonary edema and give a shot of Lasix, or a patient with an asthma attack and give them some albuterol, or give insulin and fluids to a patient with diabetic ketoacidosis -- all these patients will get better very quickly, and you will experience a great exhilaration at having helped them,” Jacoby said. “But you will also see patients with chronic, incurable diseases, some of which you can do little to treat. How do you approach such patients? With kindness. Offer comfort, understand their frustration, which is much worse than your frustration, accept their anger and their fear. Make them less frightened.”

Jeff Fullman, M.D., ’80, president of the OHSU School of Medicine Alumni Association, tied the imparted wisdom together: “Your white coat is a symbol of your commitment to this profession,” he said. “You have pledged yourselves to a lifetime of learning, growth and compassion. Your white coat is also a symbol of humanism and professionalism. Humanism is making sure that your patient knows they are the most important thing on your mind. As you know, listening and hearing what your patient has to say is an integral part of your education, as they will be some of your best teachers.”

Elbow or fist bumps over handshakes and hugs

At the appointed time, the students lined up with their coats folded over their left arms and filed across the stage. Kirk Lalwani, M.D., professor of pediatrics, anesthesiology and perioperative medicine, and chair of M.D. program admissions, read their names as Rebecca Cantone, M.D., and Benjamin Schneider, M.D., student affairs assistant deans, took turns helping each student slip into their white coats.

Fist or elbow bumps with the platform party, led by Tracy Bumsted, M.D., M.P.H., associate dean for undergraduate medical education, and gifts handed to each student by Alumni Association leaders completed the tribute.

Maliyan Binette donned her white coat and then popped down to the end of the stage to photograph friends as they received theirs, including Yamileth Murillo. Murillo said she teared up several times during the ceremony, as she listened to the speakers, as she donned her coat, and as the messages of praise from her family and friends lit up her phone throughout.

“I’m the first one in my family to graduate from college,” she said. Marking her entry into medical school with the White Coat Ceremony and feeling her family all around her “was really meaningful for me — having that reassurance that I have a place here after working so hard.”

Omar Nazir, M.D., assistant professor of orthopaedics and rehabilitation and a wellness adviser in the medical school, completed the ceremony by leading the students and faculty in the Oath of Geneva.

Together, all in one place

Elation was palpable in the RLSB atrium as the students filed out where the hugs, high-fives and picture taking began. Schneider, the student affairs dean, sprinted up the steps to the landing above to take a photo of the entire class celebrating in their white coats.

Lera O’Sullivan said that having 18 months with her classmates before holding their White Coat Ceremony actually added to the camaraderie, because they had had a chance to get to know each other and could revel in each other’s success.

“Ultimately, I found great meaning in seeing all of my classmates gathered in one place — really for the first time so far in medical school,” O’Sullivan said. “It was amazing to see all of these incredible individuals in person, to hear where and what they studied prior to medical school, and to celebrate the accomplishment of being medical students.”