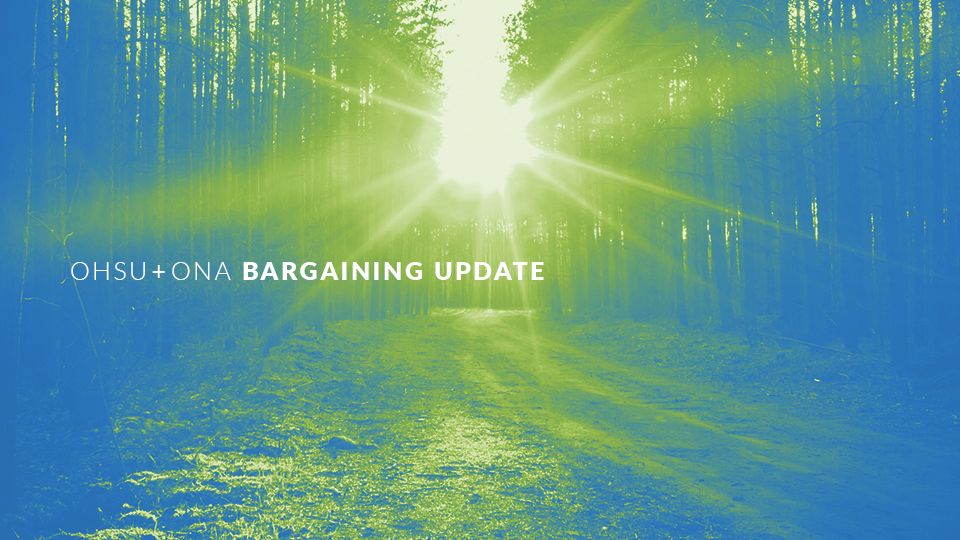 Members of the Oregon Health & Science University and Oregon Nurses Association bargaining teams on Wednesday met for a productive second day of virtual negotiations, where the teams reached tentative agreements on ground rules and a letter of agreement providing support for ONA bargaining team members.

The OHSU team is pleased with the positive rapport that was established between the teams, the agreements that were reached and the open discussion around our proposals.

The parties also discussed the newly established state Paid Leave Oregon program. Under the state benefit program employees can receive up to 12 weeks of paid leave. The program is funded by a contribution the state has set at 1% of wages and employers pay 0.4% of wages while employees pay 0.6% of wages through a payroll deduction. Read more about the state benefit in this post.

In a proposal earlier this month, ONA asked that OHSU pay for the employees’ portion of the state leave contribution. Earlier this fall ONA was given the opportunity to bargain over this issue. It was determined that ONA’s request would cost more than half a percent wage increase for the entire unit. In response, OHSU told ONA that, while it will not accept an agreement to be effective while bargaining, it will consider all proposals for the new contract.

OHSU also responded to ONA’s proposed Surge MOU, which included additional and different incentives. OHSU explained that it believes the current incentives, including enhanced CNI and the Letter of Agreement on incentives during the RSV surge, are sufficient and competitive compared to what other medical centers are offering their nurses. OHSU offered to extend those existing incentive agreements through March to provide support through the expected period of higher activity. OHSU also explained its interest in overhauling incentive structures in the contract moving forward, so that the parties do not have to enter into Letters of Agreement as often in the future. OHSU committed to providing its proposals on incentives in January.

OHSU acknowledges the extension of the Letter of Agreement on temporary incentive pay during the RSV surge this week. While the latest forecast indicates respiratory illnesses are likely near the peak this week and hospitalizations are declining, the LOA extends incentives through to Jan. 15, 2023, to temporarily provide additional support for nurses to help respond to increased hospitalizations. OHSU offered to extend this LOA through March as part of its response to ONA’s Surge MOU.

The parties reached tentative agreement on:

Wednesday was the final bargaining session in 2022; negotiations resume Jan. 11, 2023, when teams will meet in person. In the new year, the teams will meet weekly or bi-monthly as agreed.