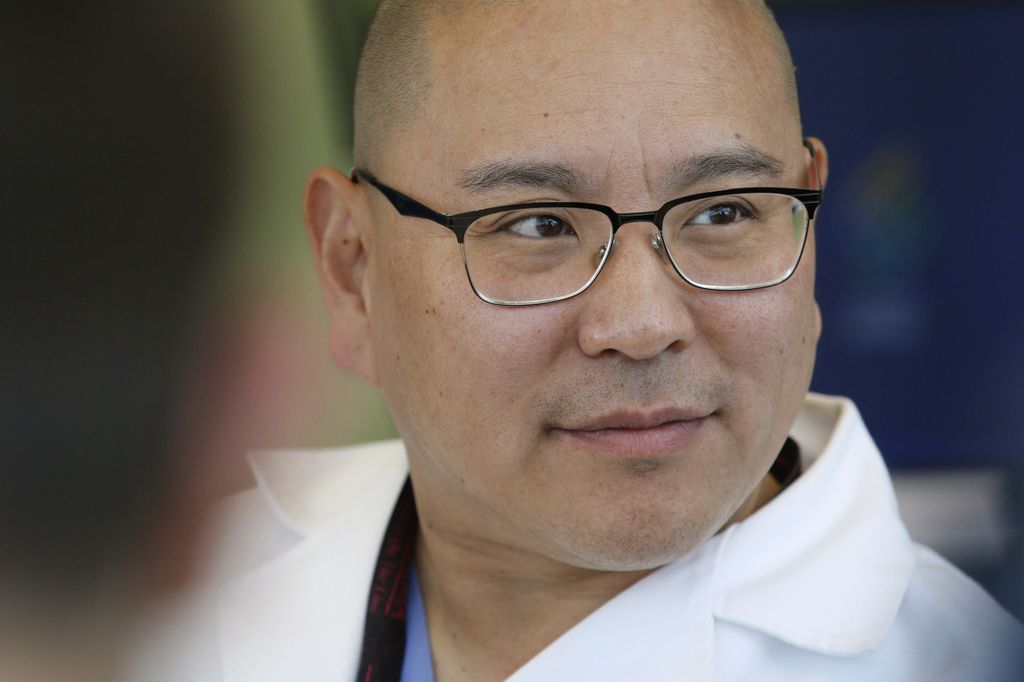 Albert Chi, M.D., M.S.E., serves as medical director of the OHSU Targeted Muscle Reinnervation program. He is an associate professor of trauma, critical care and acute care surgery in the OHSU School of Medicine. He was raised in Phoenix as the first-generation son of Taiwanese parents. Chi now resides in Portland with his young son. In 2015, he served in Operation Enduring Freedom as a commander in the U.S. Navy Reserve.

Critically injured in a motorcycle accident in 1993, Chi developed an abiding appreciation for the care that he received from the registered nurse who happened across his accident and the clinical team that saved his life. That experience guides the care he provides to patients he sees today as a trauma surgeon at OHSU.

“I think about that day a lot, even in my day-to-day job now,” he said. “I remember that fear of going to the trauma bay and hearing people talk about you, not to you. I remember how hard it is to be a patient, so I make a point of connecting with my patients, telling them my name and easing their fears.”

Chi earned his master’s degree in bioengineering from Arizona State University in 1999 and his M.D. from the University of Arizona in 2003. Prior to coming to OHSU in 2016, Chi was medical director of the Targeted Muscle Reinnervation Program and medical director of the Physician Assistant Surgical Residency Program at Johns Hopkins University, where he continues to hold an appointment with the Johns Hopkins Applied Physics Lab. 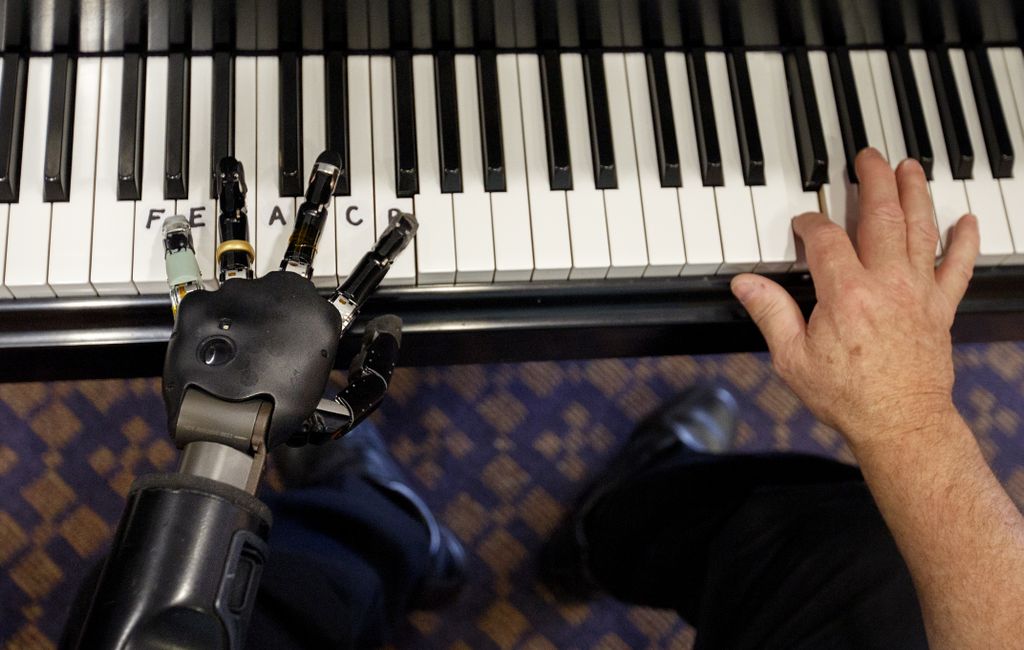 Johnny Matheny of Port Richey, Florida, is learning to play the piano using a thought-controlled bionic arm. Matheny has undergone TMR surgery, performed by Dr. Albert Chi, to “reassign” nerves that once controlled an arm and hand he lost to cancer so that they could communicate with a robotic prosthetic. (OHSU/Kristyna Wentz-Graff)

Chi has earned a reputation as one of the nation’s leading experts on improving the lives of people with traumatic injuries or congenital limb loss. Targeted muscle reinnervation is cutting-edge technology inspired by some of the most memorable works of science fiction. By reassigning existing nerves, Chi can make it possible to control advanced prosthetic devices merely by thinking about the action they want to perform. Funded largely by the U.S. Department of Defense, this research resulted in the modular prosthetic limb used by Chi’s patient Johnny Matheny, a Florida resident who lost his left arm to cancer. Chi’s goal is to see the technology developed to the point that it becomes more widely available for patients who need it. In 2018, one of Chi’s patients received the first LUKE arm, the world’s most advanced commercially available prosthetic, covered by private insurance. 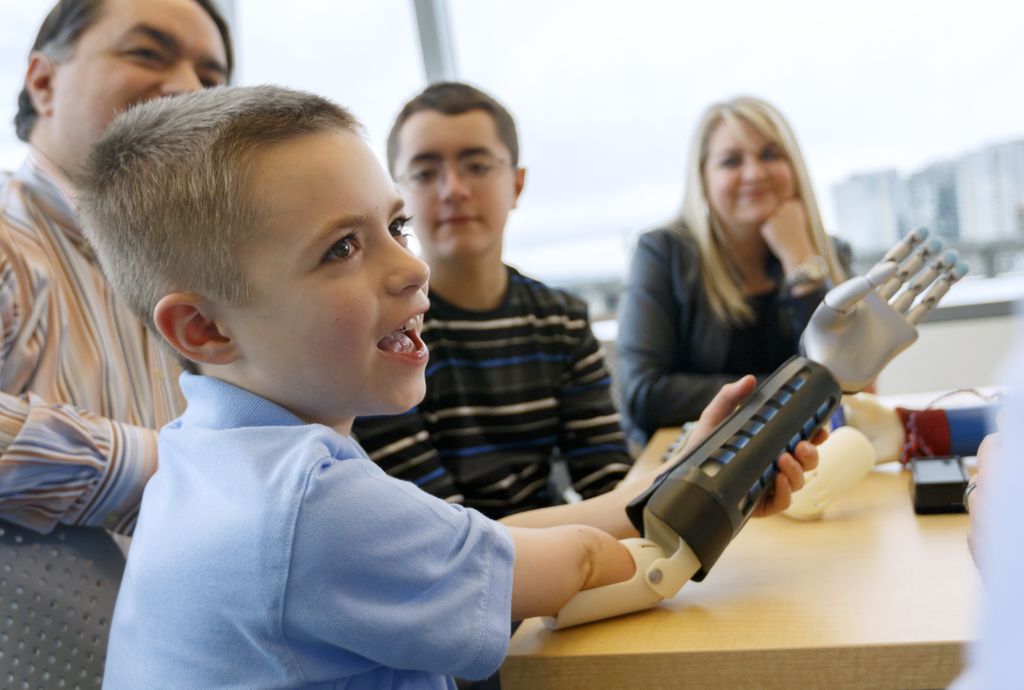 Zachary Pamboukas, 9, and his family check out a new prototype myoelectric arm which will be used in the first U.S. clinical trial testing 3D printer produced prosthetics for children. The trial is a partnership between OHSU and a nonprofit based at the University of Central Florida in Orlando, Limbitless Solutions. (OHSU/Kristyna Wentz-Graff)

Not everyone is a good candidate for targeted muscle reinnervation. For example, the cost can be prohibitively expensive for children who will quickly outgrow them. Chi is the lead clinical investigator for the first U.S. clinical trial of myoelectric arms for children produced with 3D printing technology, with the goal of expanding access and affordability to children with congenital limb loss. These arms operate using a pair of leads placed on the skin, which activate when children flex their muscles. The first phase clinical trial is jointly conducted by OHSU and Limbitless Solutions, a nonprofit organization based at the University of Central Florida.

Chi was making headlines for his cutting-edge work with targeted muscle reinnervation when he spoke about the latest innovations at a congenital limb-loss conference at Johns Hopkins in 2013. A mother walked up to him after the presentation. “She looked at me and said, ‘My son is right here. What can you do for my kid?’” he said. The question prompted him to become involved with the nonprofit Enabling the Future, which builds and distributes low-cost prosthetics using freely distributed designs. Using a 3D printer in his home, Chi has built hundreds of devices for children.