‘Bench to bedside’ research at OHSU may lead to treatment for ALD
By Erik Robinson March 29, 2017 Portland, Ore. 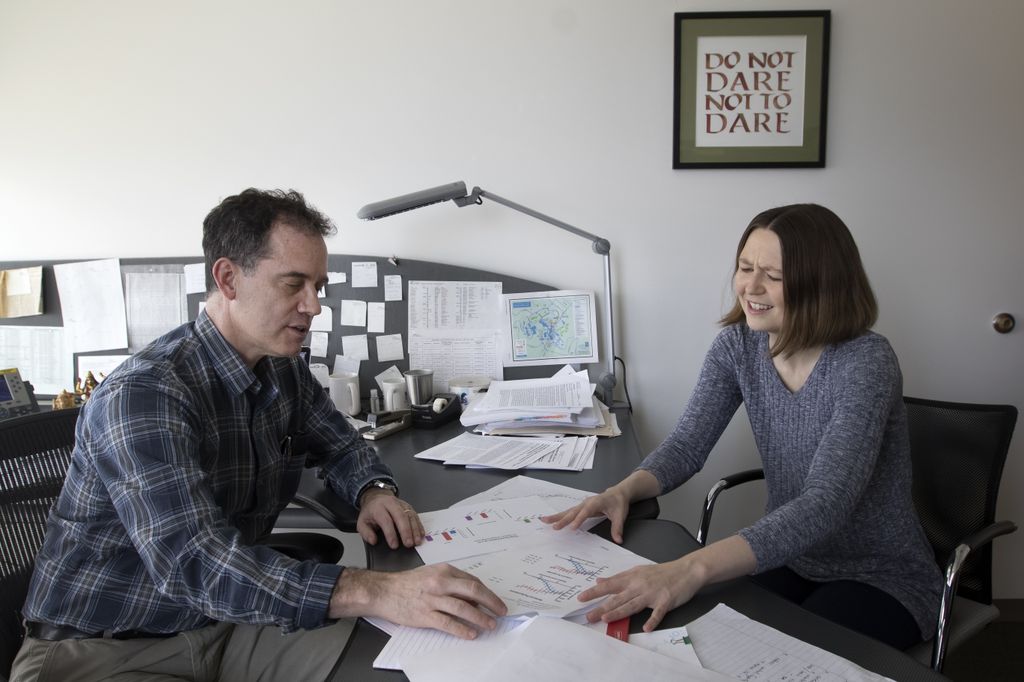 Tom Scanlan, Ph.D. (left) and Meredith D. Hartley, Ph.D. look over data on March, 10, 2017, part of their research on a synthetic thyroid hormone that might possibly help stop the progression of the neurodegenerative disease adrenoleukodystrophy, or ALD. (OHSU/Kristyna Wentz-Graff)

An idea that flickered to life as purely academic research soon could turn into a medication that helps people with the rare disease featured in the 1992 movie “Lorenzo’s Oil.”

Research published online in the journal Endocrinology found that a small synthetic molecule initially developed to lower cholesterol may slow or stop the devastating progression of the neurodegenerative disease adrenoleukodystrophy, or ALD. The study was conducted in a mouse model, but planning is under way for a human clinical trial.

“It’s beyond exciting to have your basic science research come as close as ours has come to a clinical application,” said senior author Tom Scanlan, Ph.D., a professor of physiology and pharmacology in the OHSU School of Medicine.

The syndrome is a genetic disorder that affects 1 in 17,000 people worldwide, causing adrenal gland dysfunction and loss of the protective myelin sheaths that envelop nerve fibers in the central nervous system. The gene resides on the X chromosome and as a result ALD primarily affects males. About 50 percent of women with the mutated gene also experience symptoms, though they are usually milder and begin later in life.

There are two main phenotypes of the disease. The adult-onset version results in gradual loss of nerve fibers in the spinal cord, characterized by numbness in the legs, losing the ability to walk, and urinary and bowel incontinence. The childhood version, depicted in the 1992 motion picture based on a true story, progresses much faster and degrades the protective myelin sheath covering nerve fibers in the brain. It’s typically fatal within three to five years from the onset of symptoms.

The parents of Lorenzo Odone, motivated by their son’s diagnosis of an incurable disease at age 6, researched and developed a mixture of dietary fats that correct the signature biochemical abnormality of the disease, high levels of very long chain fatty acids, or VLCFAs. Lorenzo’s Oil, as this dietary supplement became known, lowers the elevated VLCFAs in the blood of patients with either the childhood or adult versions of the disease. However, the supplement does not significantly improve clinical symptoms of the disorder, likely because it does not achieve high enough concentrations in the brain and spinal cord.

Scanlan, along with co-authors Meredith D. Hartley, Ph.D., Lisa L. Kirkemo and Tapasree Banerji, Ph.D., tested a synthetic thyroid hormone discovered by Scanlan two decades ago. The study, which used mice with the same genetic defect as in ALD, found that the hormone lowered the level of VLCFAs in the brain and central nervous system. Since the mutant mice do not get the neurological symptoms of the disease, the next step to determine if this drug works is to test it in a clinical trial involving people with the disease.

“If it works,” Scanlan said, “the hope is that it arrests the progression or the onset of these devastating neurological deficits.”

The path from bench to bedside

Scanlan synthesized the hormone in 1996 as a researcher at the University of California, San Francisco, thinking it would be useful as a cholesterol-lowering medication. UCSF subsequently licensed the drug – now called sobetirome – to a pharmaceutical company to begin the intensive process of developing a medication. Scanlan, who moved to OHSU in 2006, believed his work was finished. However, after pursuing development of the drug through a first-stage clinical trial, the company opted to halt its work.

In 2010, the license reverted back to Scanlan.

One day, boxes upon boxes arrived outside Scanlan’s office. They contained a trove of drug development data and regulatory documents, as well as a large container of sobetirome specially manufactured for clinical trials.

However, Scanlan wasn’t interested in pursuing another medication to lower cholesterol.

“Since I was now in possession of a clinical stage program, I wanted to do something that addressed a serious unmet clinical need,” he said.

By that time, Scanlan had spotted indications in scientific literature that thyroid hormone might be useful in fixing some of the problems involved with ALD.

The neurological symptoms of the disease are thought to occur from the buildup of VLCFA that results from the defective gene, called ABCD1.  This gene is normally responsible for controlling the level of VLCFAs inside cells by transporting them into a specialized compartment in the cell called a peroxisome, where they are degraded by oxidation. ABCD2 is a similar gene that can compensate for defective ABCD1 and restore the ability of cells to break down very long chain fatty acids. New research had shown that thyroid hormone and sobetirome activated ABCD2 in cells in culture.

When Hartley joined the lab in 2011 as a postdoctoral researcher, she and Scanlan wanted to see whether it worked within living tissue.

Next stage: A clinical trial for people with ALD

The question is, will it help people?

“It’s very promising,” said David Koeller, M.D., who directs the OHSU Metabolic Clinic and also treats patients with ALD. “This study is a first step, but it’s going to take a while to determine whether this is going to be an effective, beneficial treatment. It will be very easy to recruit for clinical trials because right now there is nothing else out there.”

Kathleen O’Sullivan-Fortin is the mother of an 11-year-old son with ALD and a patient advocate on the board of ALD Connect, an international consortium of patients, researchers and clinicians. She said her son was fortunate to be diagnosed before the disorder had affected his brain, which enabled him to enroll in the ongoing clinical trial for the dietary supplement Lorenzo’s Oil. He hasn’t experienced neurodegenerative symptoms so far, but the family braces itself every time they return to the clinic for a magnetic resonance imaging scan.

“Every six months, we live or die by the MRI,” O’Sullivan-Fortin said. “It’s a waiting game because there is no preventative therapeutic.”

Scanlan is a founder and member of the board of directors of a new company, NeuroVia, which is currently developing sobetirome for the disease.

“Translating a basic discovery into actual medicine rarely happens in academia,” Scanlan said. “In this case, the clinical trial is close to starting and we should find out soon if sobetirome can help these patients. It’s been a long journey that has turned out to be a great example of translational research going from bench to bedside.”

O’Sullivan-Fortin, who lives in Ipswich, Massachusetts, calls the Oregon study a potential game-changer for people with ALD.

“It’s super exciting,” she said. “The fact that he found a molecule 20 years ago, and then was able to take it through all these next steps to a clinical trial is quite frankly amazing.”

The research was supported by the National Institutes of Health (grant DK52798), the OHSU Laura Fund for Innovation in Multiple Sclerosis, and National Multiple Sclerosis Society. Scanlan and Hartley are inventors on a pending patent application for the use of sobetirome in ALD.

Previous Story In search of treatment for a perilous form of leukemia Next Story Mother-daughter relationship key to improving end-of-life-care, study finds

Tom Scanlan, Ph.D. (left) and Meredith D. Hartley, Ph.D. look over data on March, 10, 2017, part of their research on a synthetic thyroid hormone that might possibly help stop the progression of the neurodegenerative disease adrenoleukodystrophy, or ALD. (OHSU/Kristyna Wentz-Graff)