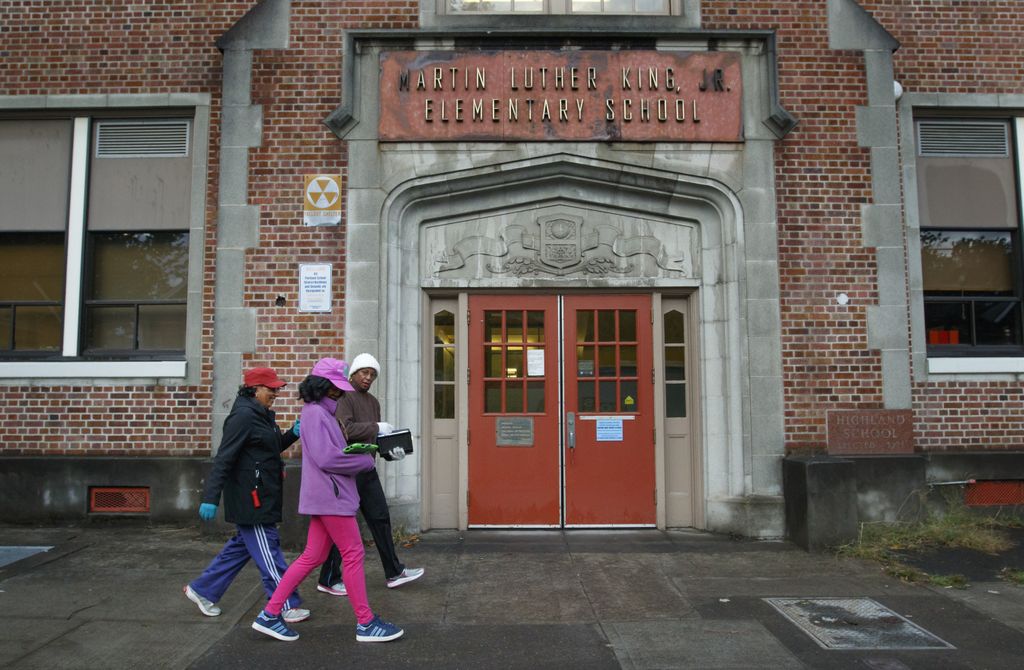 (Left to right) Bernadine Clay, Vickie Naylor and Donna Maxey walk past Martin Luther King, Jr. Elementary School and discuss times they were discriminated against as children, one of the memory prompts in the Sharing History through Active Reminiscence and Photo-Imagery (SHARP) study. (OHSU/Kristyna Wentz-Graff)

On a recent brisk autumn morning, Bernadine Clay, Vicki Naylor and Donna Maxey set out for a stroll around an area of north Portland.

The trio laughed and playfully bickered like the old friends they are, remembering the people and places that historically shaped what was once the heart of Oregon’s African-American community. Today, the area has changed substantially, but they still feel an affinity for the place where they feel the pull of home.

Today, the neighborhood has changed, as have Clay, Naylor and Maxey. Now in their late 60s and 70s, the three women regularly walk the neighborhood to reminisce and exercise as part of a group of 21 participants enrolled in a unique clinical trial through OHSU’s Layton Aging and Alzheimer’s Disease Center.

The study is led by Raina Croff, Ph.D., an assistant professor of neurology in the OHSU School of Medicine.

Its purpose is to sustain or improve cognitive health for African-Americans aged 55 and older, a group that is about twice as likely to develop Alzheimer’s or other dementias as older whites. From an academic research perspective, the program combines physical activity with social engagement and conversational reminiscence.

“It’s just good to get out and walk,” Naylor said.

The program is known as Sharing History through Active Reminiscence and Photo-Imagery, or SHARP.

Divided into groups of three, the participants have each spent at least 10 years of their lives in north or northeast Portland. The goal is to get out three times a week over six months, walking 72 pre-designed one-mile routes through the area. As they walk each route, a smart tablet prompts participants with questions relating to memory markers – news clippings, photographs, advertisements, or artifacts such as political campaign buttons – tied to certain locations along the routes, such as the site of a school, church or a civil rights march.

The program melds Croff’s expertise as a medical anthropologist with her background in African Diaspora history.

“I was looking at culture as a primary driver of health,” said Croff, who was raised in both north and east Portland and later went away to study anthropology in West Africa. “I was interested in having people walk through physical spaces and talking about their memories with one another – as opposed to sitting in a room and being asked about it.”

The goal is to test whether physical exercise, combined with active reminiscence, can forestall memory loss. 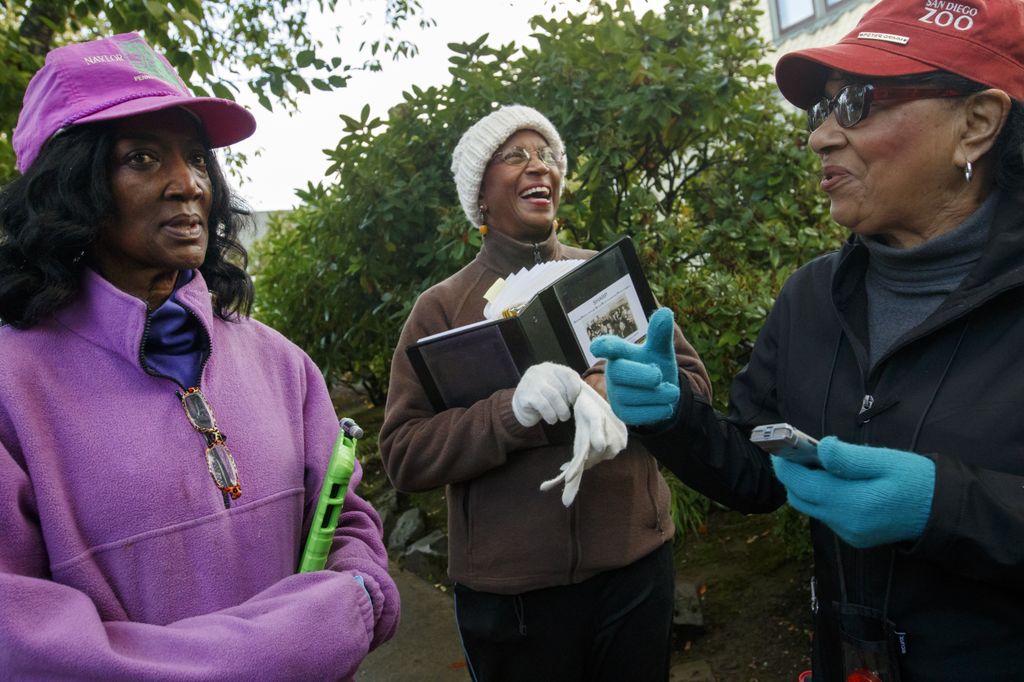 The study includes cognitively healthy people and those experiencing memory loss or mild cognitive impairment, as measured through a baseline assessment. At the end of six months, researchers will follow up with a test to determine whether the program improved or maintained participants’ cognitive health. Croff developed the walking program in a pilot study last year, and early indications show promise.

Participants seem to enjoy the routine of getting together and recalling the past.

“They’re walking through what is, and talking about what was,” Croff said. “They’re talking about the changes with people who understand how it feels, because they also remember what it was like to know everyone on their block, sometimes over generations.  It’s about community memory building while also preserving your health.”

However, some of the memories are actually painful.

“The reminiscing triggers me,” Maxey said. “It’s very upsetting, especially when this neighborhood is supposed to be gentrifying, to see overgrown brush in some of the yards and the sidewalks so broken up it’s hard to walk.” 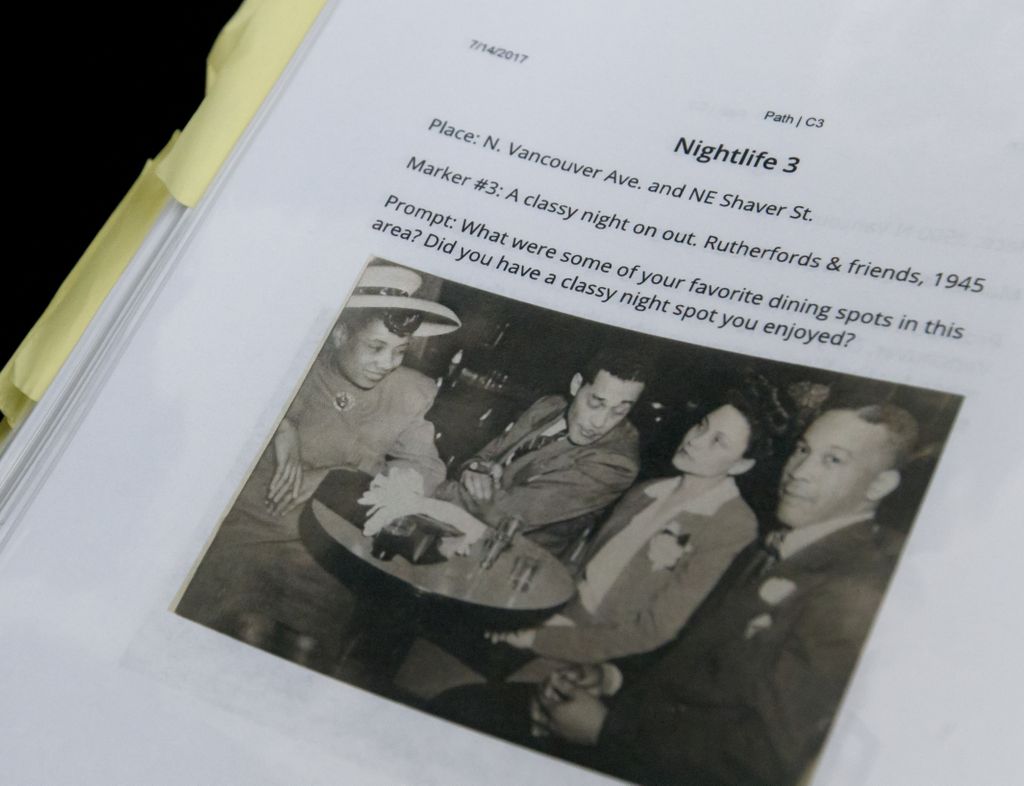 A sample of the memory prompts used in the Sharing History through Active Reminiscence and Photo-Imagery (SHARP) study. (OHSU/Kristyna Wentz-Graff)

Maxey remembers a neighborhood where generations of African-American families, along with their white neighbors, took pride in keeping up their homes, yards and businesses. Today, northeast Portland abounds with signs of change. During the recent walk through the neighborhood surrounding Martin Luther King Jr. School, the three women passed remodeled houses, one electric car after another, and a sign posted on a fence labeled “Pesticide free zone.” At one point, the women looked askance at a bearded runner jogging through the neighborhood barefoot.

Yet, something is missing.

Maxey speaks with bitterly painful recollection of the devastation her family suffered when they lost her childhood church that once stood on the current site of Memorial Coliseum. Her family’s home and her father's barbershop was located where I-5 now slashes through the area. Many of the longtime families have scattered. Clay laments that sometimes when she walks into the latest trendy restaurant, the voices become hushed – as if she’s the outsider.

“There are people who have lived in this neighborhood 10 or 15 years who have no idea that there was a thriving black community here,” Maxey said.

Croff, who believes the program can be adapted to other communities, hypothesizes that the walking program will help participants to maintain and even improve their cognitive health. Either way, she sees value in the project.

“It’s a way of saying, we’re still here,” she said. “We’re still part of the community.”

The study is supported by funding from the Alzheimer’s Association. The original study design was developed through a pilot project supported by the U.S. Centers for Disease Control and Prevention. OHSU’s Layton Aging & Alzheimer’s Disease Center is one of 29 NIH Alzheimer’s Disease Centers in the United States and the only one of its kind in Oregon. One of the country’s top-ranked NIH Alzheimer’s disease research centers, the Layton Center conducts studies of promising treatments, technologies for diagnosis and patient support, genetics, neuroimaging and pathology.

(Left to right) Bernadine Clay, Vickie Naylor and Donna Maxey walk past Martin Luther King, Jr. Elementary School and discuss times they were discriminated against as children, one of the memory prompts in the Sharing History through Active Reminiscence and Photo-Imagery (SHARP) study, September 20, 2017. (OHSU/Kristyna Wentz-Graff)

(Left to right) Vickie Naylor, Bernadine Clay, and Donna Maxey look over the walking route as they take part in the Sharing History through Active Reminiscence and Photo-Imagery (SHARP) study, September 20, 2017. (OHSU/Kristyna Wentz-Graff)

Participants look over the walking route as they take part in the Sharing History through Active Reminiscence and Photo-Imagery (SHARP) study, September 20, 2017. (OHSU/Kristyna Wentz-Graff)

A sample of the memory prompts used in the Sharing History through Active Reminiscence and Photo-Imagery (SHARP) study, September 20, 2017. (OHSU/Kristyna Wentz-Graff)