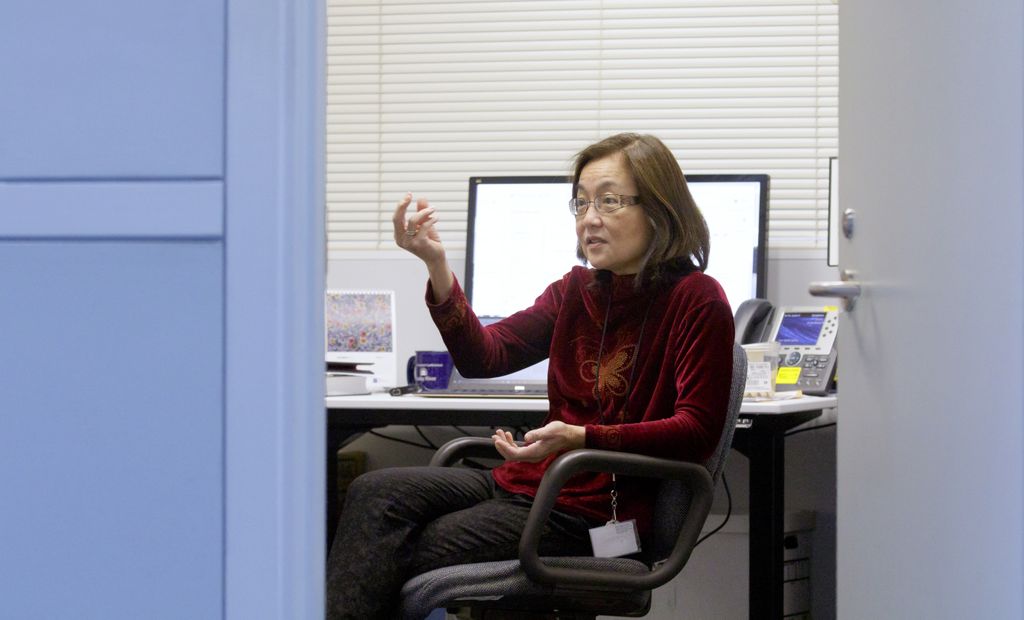 If scientists can use light to activate portions of the brain associated with specific tasks that involve vision, says Anna Roe, Ph.D., they may also be able to trigger aspects of the brain that involve touch, motor skills and emotion. (OHSU/Kristyna Wentz-Graff)

What if you could rewire the brain to enable blind people to see?

Anna Wang Roe, Ph.D., a professor in the Division of Neuroscience at the Oregon National Primate Research Center and behavioral neuroscience in the OHSU School of Medicine, is working on that question. Her cutting-edge research explores how the brain processes vision. Roe splits her time between her lab at OHSU in Portland, Oregon, and Zhejiang University in Hangzhou, China, where she directs the Interdisciplinary Institute of Neuroscience and Technology.

She demonstrates the concept using a kind of parlor trick. On a screen in her office, she flashes an image of vertical wavy shapes demarcated by parallel strings of light yellow and darker blue dots. Look closely between the dots, and you’ll “see” that some areas appear to be shaded in yellow and some in blue. However, as a point of fact, these areas are identical in color. Your brain has reinterpreted the image to generate a perception of a difference where none exists. 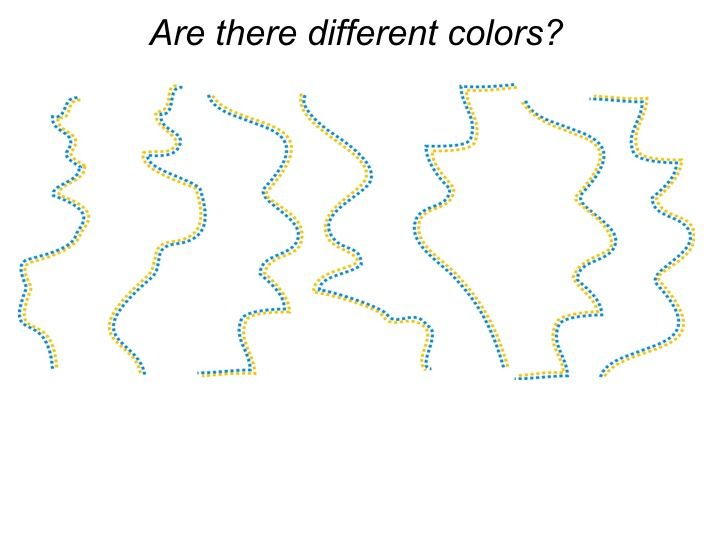 This optical illusion illustrates the way the brain can be tricked--the basis of Roe's work. The wavy lines appear to have shades of yellow blue dividing them, when in fact, the areas are actually the same color. Your brain has reinterpreted the image to generate a perception of a difference where none exists. (OHSU)

“Your eye is receiving the exact same information, but your brain is interpreting it differently,” Roe explains. “This is what your cortex does – it changes the percept.”

To use computer coding terminology, Roe is working toward the day when it may be possible to “hack” the brain so that people who have lost their vision may see.

“You can circumvent the eye,” she said.

Bit by bit, using advanced imaging techniques in rhesus macaque monkeys, Roe is mapping the modules within the brain. Roe and her colleagues are learning how the brain processes senses, including vision and touch, to guide motor skills and even influence emotions. Stimulating these modules with light – using techniques known as optogenetics and pulsed near infrared laser stimulation – she is able to recreate the activity patterns and induce similar sensations.

“If we can understand the strategies of how the brain divides information processing into stages and then re-integrates the information to form coherent percepts, then you can use that strategy,” she said. “You can then translate those signals into stimulation patterns to get this person to see.”

She hopes that within a decade the technology will be ready for clinical trials involving people.

As a young scientist, Roe was inspired by the work of David Hubel and Torsten Wiesel, neurophysiologists who shared the Nobel Prize in 1981. The two neurophysiologists discovered how the brain converts light received by the eyes into signals, which are sent to the brain and converted into visual images.

Roe believes optical signaling will improve upon well-established methods of treatment using electrodes implanted in the brain and central nervous system. For example, deep brain stimulation has been used for more than 25 years in the U.S. to alleviate symptoms of Parkinson’s disease and essential tremor.

“The problem with electrical stimulation is there’s a lot of electricity that spreads within the brain and activates lots of neurons outside the desired area,” Roe said. That means that patients may experience unintended side effects even with the latest improvements in electrode technology, Roe said.

By contrast, she said, light can target specific areas within the brain with much greater precision.

“Optics will be the wave of the future,” she said.

“The possible implications are huge,” she said.

Roe arrived at OHSU in 2015 after 12 years at Vanderbilt University and seven years at Yale University. She is an awardee of the Sloan, Whitehall and Packard foundation fellowships and is a Fellow of the American Association for the Advancement of Science.

Previous Story Science of love: It’s all in the brain, not the heart Next Story Nervous system discovery could inform stroke, pain therapies

In this optical illusion, (inspired from the paper: Surface color from boundaries: a new 'watercolor' illusion, by Pinna B, Brelstaff G, Spillmann L./Vision Res. 2001 Sep;41(20):2669-76.) the wavy lines appear to have shades of yellow blue dividing them, when in fact, the areas are actually the same color. Your brain has reinterpreted the image to generate a perception of a difference where none exists. This ability to "trick" the brain is the basis for the work of Anna Roe, Ph.D., a senior scientist at the Oregon National Primate Research Center Senior Scientist. (OHSU)