Residency destinations to be revealed for OHSU School of Medicine’s class of 2018
By Franny White March 15, 2018 Portland, Oregon 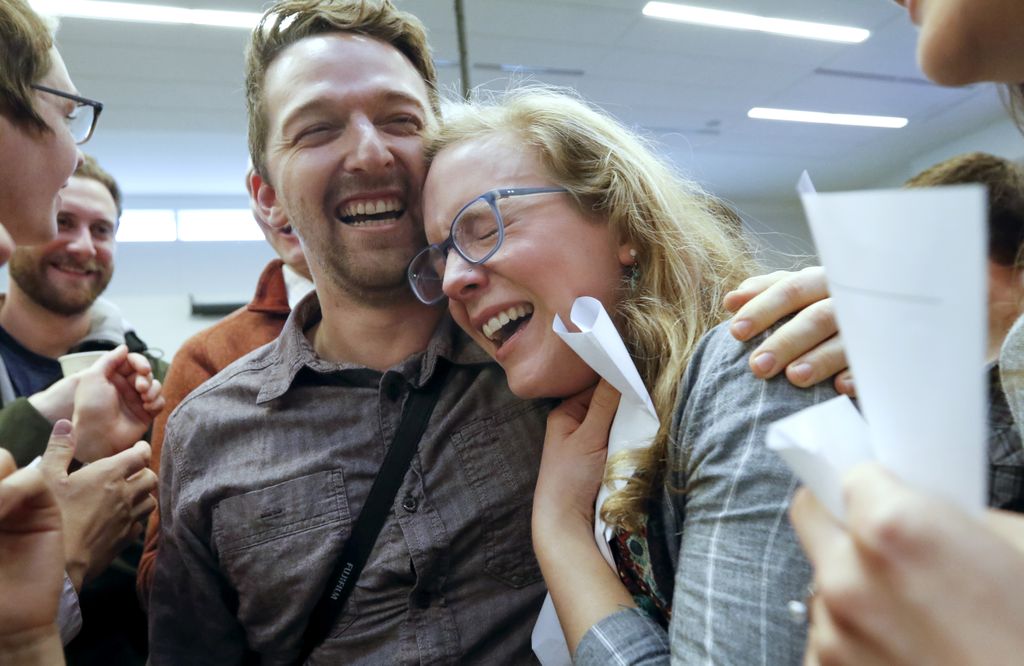 Match Day is an annual event where fourth-year medical students across the country learn where they will spend the next stage of their career. Kaegan Scully-Engelmeyer (left) and his girlfriend Annaleigh Boggess, learn where Boggess will study at OHSUS's 2017 Match Day event. (OHSU/Kristyna Wentz-Graff)

OHSU School of Medicine’s class of 2018 will learn what their futures hold during much-anticipated Match Day festivities this Friday, March 16.

The annual event reveals where fourth-year medical students will spend the next three to seven years as resident-physicians at medical facilities across the nation. All U.S. medical students simultaneously receive this news, officially known as the National Resident Matching Program results, every year.

Where the students will serve is determined by a sophisticated computer algorithm, which matches them to graduate medical education, or residency, programs based on their applications, interviews, and both student and residency program preferences. 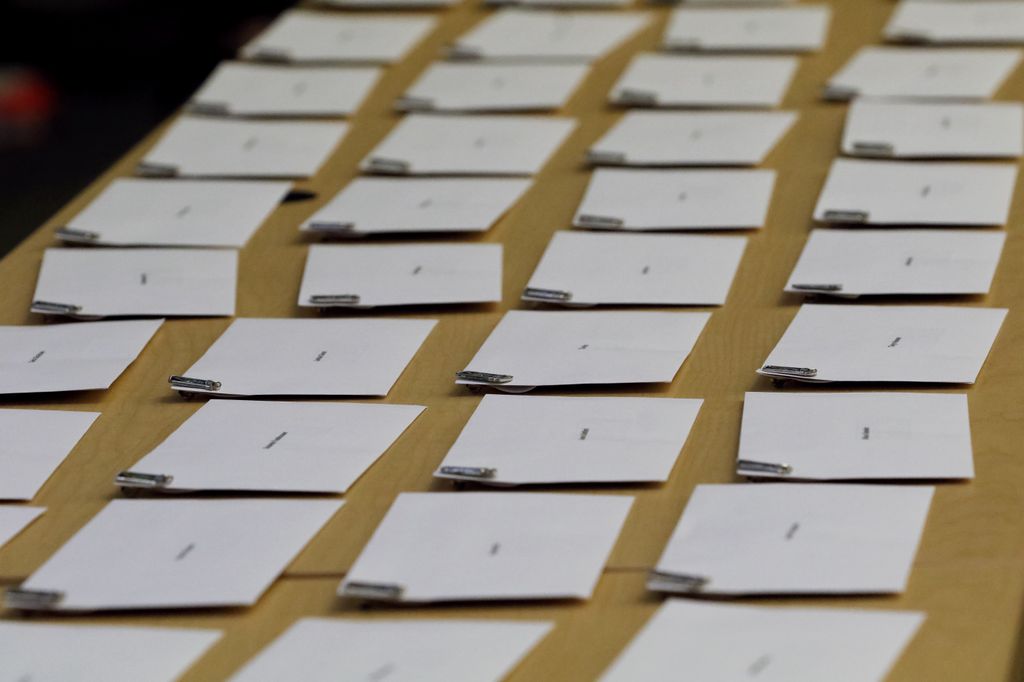 A computer algorithm matches students to residency, programs based on their applications, interviews, and both student and residency program preferences. (OHSU/Kristyna Wentz-Graff)

Through this tried-and-true system, more than 74 percent of U.S. medical students are accepted to one of their top three choices, and approximately 50 percent are matched to their first choice, according to the National Resident Matching Program. These soon-to-be clinicians will play an integral role in the evolving health care delivery system in Oregon and across the nation.

“Match Day is a celebration of our medical students' incredibly hard work to master the skills and knowledge to become physicians and to identify the areas in which they wish to begin to specialize,” said OHSU School of Medicine Dean Sharon Anderson, M.D.

“That the match is experienced by all fourth-year medical students across the country at the exact same time makes it not only a rite of passage, but a day when we as a profession focus on, and commit to meeting, the physician workforce needs in communities large and small to fulfill our obligation to society.”

The School of Medicine class of 2018 will be the first group to complete their medical degrees under OHSU’s revamped undergraduate medical curriculum, known as YOUR M.D. The revised curriculum is more personalized and interactive and emphasizes students demonstrating competency in core areas. It was launched when this year’s class started in August 2014.

Below are brief profiles of a few members of the OHSU School of Medicine class of 2018 who will participate in this year’s Match Day ceremony.

For news media: OHSU Match Day events begin at 8:30 a.m. Friday, March 16, at the Collaborative Life Sciences Building on Portland’s South Waterfront. Media planning to attend should gather in the first-floor atrium no later than 8:30 a.m. To confirm your attendance, contact Franny White at whitef@ohsu.edu or 503-494-8231.

After being diagnosed with Hodgkin’s lymphoma at age 15, Shira Einstein became fascinated with the medical science clinicians at OHSU Doernbecher Children’s Hospital used to bring her back to health.

Two years later, she was visiting Bolivia and met a girl named Dana who was dying of the same blood cancer Einstein had overcome. The experience solidified her decision to become a doctor.

“I had the incredible privilege of having access to excellent medical care at OHSU, but impoverished communities here in Oregon and beyond often aren’t so lucky,” Einstein said. “I celebrate being healthy each day by striving to learn as much as possible and provide compassionate care to each patient I have the honor of meeting.”

Einstein, who has been in remission for 10 years, will specialize in pediatrics so she can help other sick children much like the team at OHSU Doernbecher helped her.

After her three-year pediatrics residency, Einstein will spend at least two years working as a physician in an underserved community such as a rural area or an American Indian reservation. She hopes to remain in Oregon so she can be close to family and friends.

Elizabeth Kinsey’s father died when she was 12, prompting her mother to move from San Antonio, Texas, to New York so she could support the family. Kinsey stayed in San Antonio and was raised by her grandmother, Josie Treviño, a Mexican migrant worker and first of nine children who hadn’t had the opportunity to pursue formal education.

“Study hard, mija, and you can have a better life one day,” Kinsey recalled her grandmother telling her.

Kinsey moved to New York for high school, then completed her undergraduate degree at Harvard University. She created her own major, Global Health Entrepreneurship, to pursue her interests in global health and sustainability. After working in other fields, Kinsey realized that medical school was the only path for her.

“None of the other work really fulfilled the aspect of one-on-one patient care,” which Kinsey said she knew was her passion.

While at OHSU, she created a rotation to Oaxaca, Mexico, to work with obstetricians and gynecologists and parteras, or midwives. She also established a charity to collect money and supplies to help women who can’t get to a clinic or hospital for childbirth.

Kinsey hopes to move back to the East Coast for her obstetrics and gynecology residency to be closer to family. She’s dedicated to giving back to the community and supporting women’s health, saying, “It’s my sense of purpose in life. … You can do global health right in your own backyard.”

As a first-generation undergraduate college student at UC Davis, Skender Najibi decided to apply to medical school and become the first physician in his family.

“As a minority, the health disparities that I witnessed within my own family empowered me and created a sense of responsibility for me to enter this profession and to be of service to marginalized or underserved communities from either a cultural or medical perspective,” said Najibi.

Born in northern California to immigrant parents from Afghanistan, Najibi came to OHSU with plans of becoming a surgeon. By the end of his third year, his chosen specialty had changed. His new focus: family medicine.

Shortly afterward, Najibi lost his grandfather to a late cancer diagnosis. Both experiences solidified his decision to pursue a career in family medicine, noting that routine primary care access allows physicians to serve their patients before it is too late.

While at OHSU, Najibi studied the perspectives of underrepresented minority medical students. His qualitative research and advocacy work continues to focus on the specific burdens these students carry and their unique needs.

Hoping to stay close to home, Najibi has applied to only West Coast family medicine residency programs. His wife, who is also applying to medical school, as well as his parents and younger brother, plan to join Najibi on Match Day.

OHSU's Class of 2017 learned their residency destinations at OHSU's Match Day, March 17, 2017. Graduating medical students across the nation learned simultaneously where the next step of their medical career would take place. Placements are determined by a national resident matching program. (OHSU/Kristyna Wentz-Graff)

Lydia Michael (left) and her daughter Ann Oluloro celebrate Oluroro's residency match at OHSU's Match Day, March 17, 2017 in Portland. Graduating medical students across the nation learned simultaneously where the next step of their medical career would take place. Placements are determined by a national resident matching program. (OHSU/Kristyna Wentz-Graff)

Ishan Patel shares the news of his residency match at OHSU's Match Day, March 17, 2017 in Portland. Graduating medical students across the nation learned simultaneously where the next step of their medical career would take place. Placements are determined by a national resident matching program. Patel will complete his residency at OHSU. (OHSU/Kristyna Wentz-Graff)

Kaegan Scully-Engelmeyer (left) comforts his girlfriend Annaleigh Boggess, at OHSU's Match Day, March 17, 2017 in Portland. Boggess learned she will be heading to New Mexico to complete her residency. Graduating medical students across the nation learned simultaneously where the next step of their medical career would take place. Placements are determined by a national resident matching program. (OHSU/Kristyna Wentz-Graff)