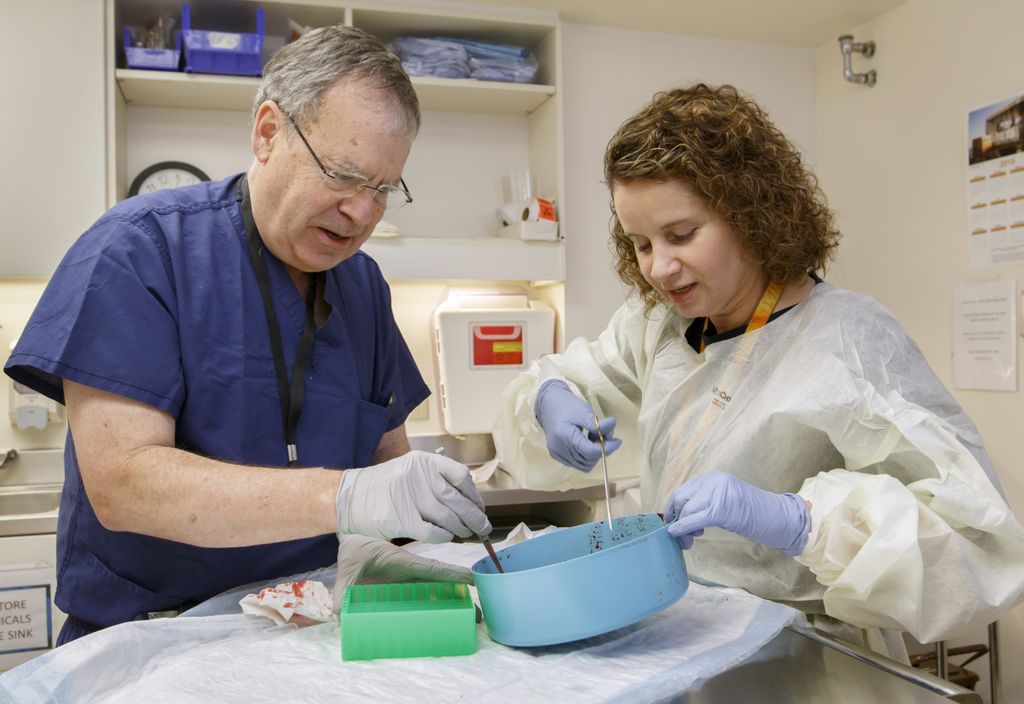 Drs. Eliot Spindel (left) and Cynthia McEvoy examined hundreds of placentas evaluating the ability of vitamin C given to pregnant smokers to block the effects of in utero smoke on the offspring. (OHSU/Kristyna Wentz-Graff)

One in 14 women who gave birth in the United States in 2016 reported smoking during pregnancy. Exposure to tobacco in the womb may greatly increase the risk of preterm delivery, low birth weight, or long-term lung damage.

While stopping the use of tobacco is ideal for optimal health, women unable to quit smoking during pregnancy may be able to reduce the impacts to their unborn child.

A clinical trial conducted at OHSU in Portland, Oregon, reveals that babies whose mothers took 500 mg. of vitamin C daily during pregnancy were less likely to develop wheeze, or a rattling sound in the chest resulting from blocked airways.

Based on previous research conducted in collaboration with the Oregon National Primate Research Center at OHSU, the clinical trial, led by Cynthia McEvoy, M.D., measured the speed at which air can be forced out of the lung of infants born to 252 mothers who smoked while pregnant. FEF readings were taken at 3 and 12 months postpartum.

“The findings were significant,” said McEvoy, a professor of pediatrics (neonatology) in the OHSU School of Medicine, OHSU Doernbecher Children’s Hospital. “At 3 months, the lung function of the babies born to women given vitamin C supplements during pregnancy far exceeded those given a placebo. Further, this difference remained substantial as the children reached the milestone of their first birthdays.”

While additional research is necessary to determine exactly how vitamin C protects human lung performance, Eliot Spindel, M.D., Ph.D., a professor of neuroscience in the OHSU School of Medicine and director of the Molecular and Cellular Biology Service Core at the Oregon National Primate Research Center, believes that vitamin C may block the increased collagen buildup around the airways, making both the lungs and the airways stiffer. Spindel previously identified this outcome in nonhuman primates born exposed to smoke and nicotine during pregnancy. 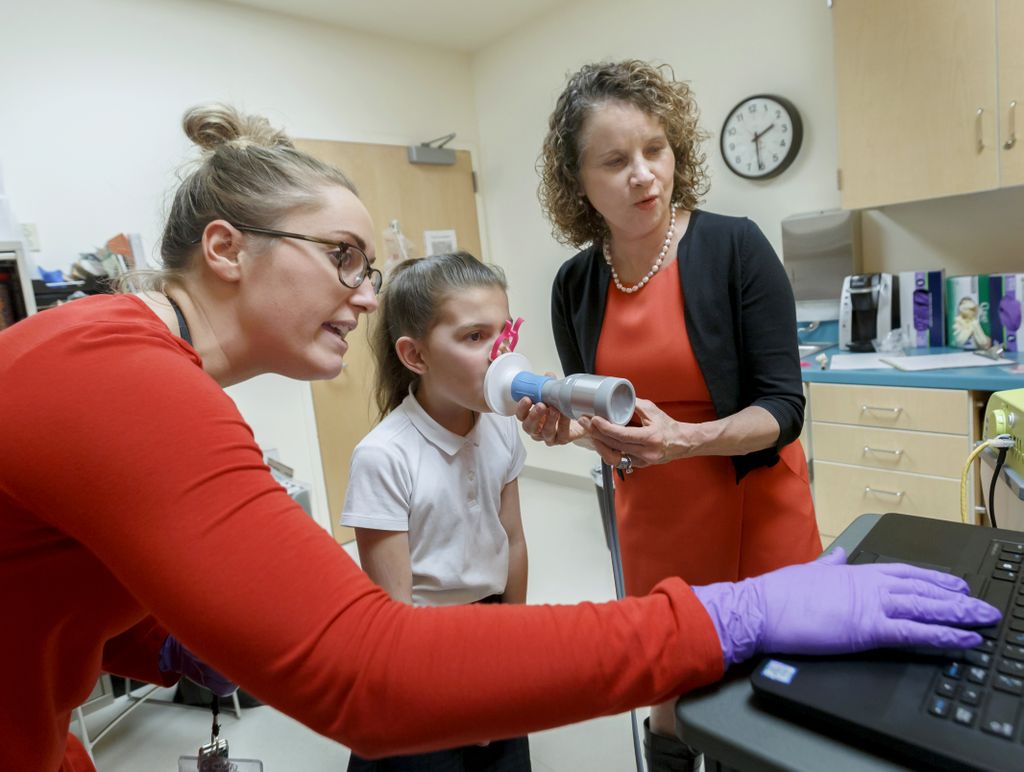 This ongoing study will follow the same group of children until age 6 to determine whether vitamin C has a long-term effect on childhood respiratory health. The researchers also will study whether vitamin supplements help suppress symptoms of asthma, a condition difficult to diagnose in the first year of life.

“As physician-scientists, we realize that in some instances, it may be necessary to meet expectant mothers where they are in order to ensure the best possible outcomes for their children,” said McEvoy. “In terms of lung health, evidence shows that vitamin C is a safe, inexpensive and accessible option to help achieve this goal.”

Dr. Cynthia McEvoy collects a cheek swab from Anabelle Wegner, 8, to look at DNA and changes in DNA over time that may be affected by different environmental toxins, pollution and conditions. (OHSU/Kristyna Wentz-Graff)

Eliot Spindel, M.D., Ph.D., a professor of neuroscience at the OHSU School of Medicine. (OHSU/Kristyna Wentz-Graff)

Drs. Eliot Spindel (left) and Cynthia McEvoy examined hundreds of placentas evaluating the ability of vitamin C given to pregnant smokers to block the effects of in utero smoke on the offspring. (OHSU/Kristyna Wentz-Graff)