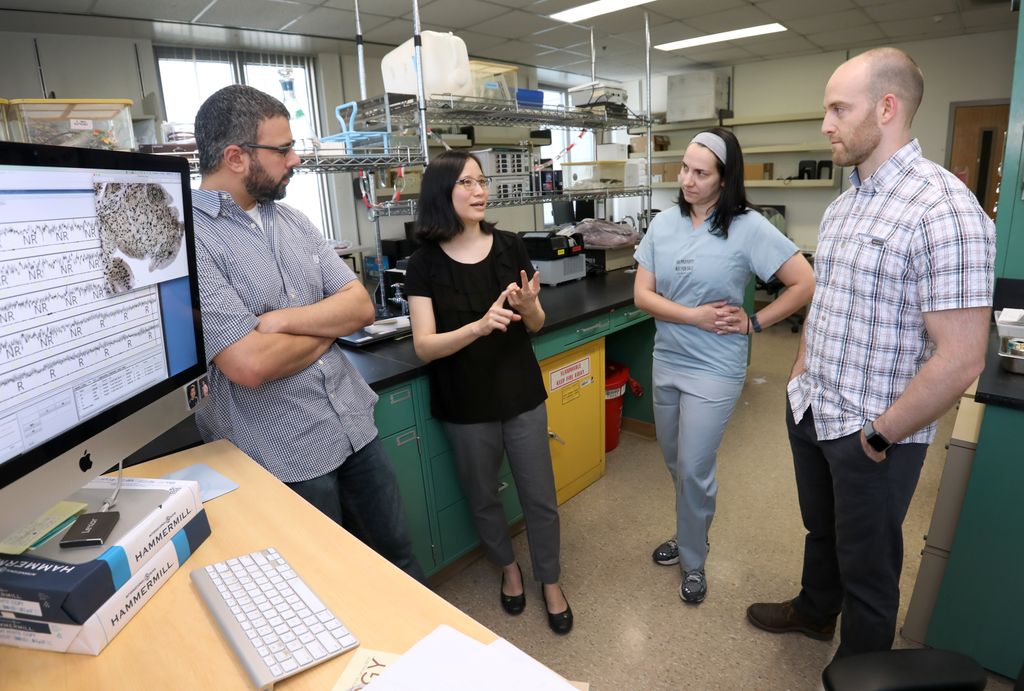 For Miranda Lim, M.D., Ph.D., a good night’s sleep isn’t just a luxury to be enjoyed on the weekend. In fact, she spends many of her waking hours thinking about sleep.

Lim is an assistant professor of neurology, medicine, and behavioral neuroscience in the OHSU School of Medicine and a staff physician at the VA Portland Health Care System. For Lim, sleep is an essential aspect of a healthy brain as well as the subject of a burgeoning field of scientific research.

“We spend a third of our lives asleep – half if you’re a baby – so it’s probably serving a really important function,” she said.

The body rests during sleep, but Lim says sleep isn’t just idle time for the brain.

Especially during “dream” sleep – the period characterized by rapid eye movement, or REM – scientists have measured plenty of electrical activity in the brain. And no one has more REM sleep than babies. REM sleep accounts for almost half of the total sleep time of infants in their first year of life, compared with roughly 15 % in the average adult.

This raises a question: Given the fact that babies don’t walk or talk, what exactly are they dreaming about?

Lim hypothesizes that sleep, specifically REM sleep, is crucial to a baby’s development.

As babies dream, especially in the first several months of life, their brains are activating circuits that will eventually enable them to perform the complex motor skills and social practices they see around them during the day. Their brains absorb their daytime experiences, then process it by knitting together a vast network of synapses between neurons while they sleep.

Dreaming may be a form of practice, Lim said.

“I have this idea that when babies smile in their dreams, it means that their brains are practicing how to socialize,” she said.

She recently tested the idea in an animal model. In a study involving prairie voles, a highly social species of rodent, Lim and OHSU colleagues Carolyn Jones, Ph.D., and Deborah Finn, Ph.D., found that depriving REM sleep in young voles caused long-lasting changes in social huddling as they grew older. It also resulted in lifelong changes in areas of the brain important for processing sensory cues from the environment.

The research raises the possibility that interrupting sleep, especially as babies, may contribute to neurodevelopmental disorders in people.

“Children on the autism spectrum typically don’t have as much REM sleep as their peers,” Lim said.

For Lim, this hits especially close to home. Two of her three young children are on the autism spectrum.

She wonders if a lack of REM sleep isn’t just a symptom of autism but potentially a contributing cause. If so, how can it be reversed? To that end, Lim wants to test interventions in sleep-deprived prairie voles that may compensate or reverse some of the effects: social enrichment, exercise, and enhancing sleep through light or molecular manipulation. They’ll focus on younger voles.

“The older they get, the harder it is to re-wire the brain,” she said.

That’s not to say older brains can’t benefit from better sleep. Lim spends about a quarter of her time in a sleep disorders clinic at the Portland VA, where she works with military veterans struggling with post-traumatic stress disorder, or PTSD, Parkinson’s and concussions. Many of those patients have insomnia, so the clinic offers cognitive behavioral therapy, group therapy and methods to improve bedtime habits to promote better sleep.

“Sleep disorders in this population are notoriously difficult to treat,” she said. “We’ve had very positive results with light therapy. Not only does it improve their sleep, but it also seems to improve their depression, traumatic brain injuries and PTSD symptoms.

“Poor sleep is a huge complaint that we hear with TBI and PTSD, and sleep impacts so many other things. It is especially gratifying to be able to improve their overall quality of life.”

Lim traces her interest in sleep to her days as an undergraduate at the University of Southern California, where she created her own major focused on the evolution of human language. Reading Noam Chomsky and Steven Pinker, Lim became interested in neuroscience and neurology, and eventually earned an M.D. and Ph.D. from Emory University in Atlanta.

She came to OHSU and the Portland VA in 2013. She is also an affiliate faculty member in OHSU's Oregon Institute of Occupational Health Sciences.

When she’s not experimenting, teaching or treating people with sleep disorders during the day, Lim and her husband spend their time raising their three children, ages 6, 4 and 2.

“I’m still in the thick of it,” she said. “Becoming a parent has made me really appreciate the value of sleep.”

Previous Story Sunil Joshi: ‘There’s a fire inside of me’ to help patients Next Story Giving patients a voice