Research Week 2019: How a love of language, passion for science helped launch communication opportunities for people with disabilities
By Tracy Brawley May 14, 2019 Portland, Oregon 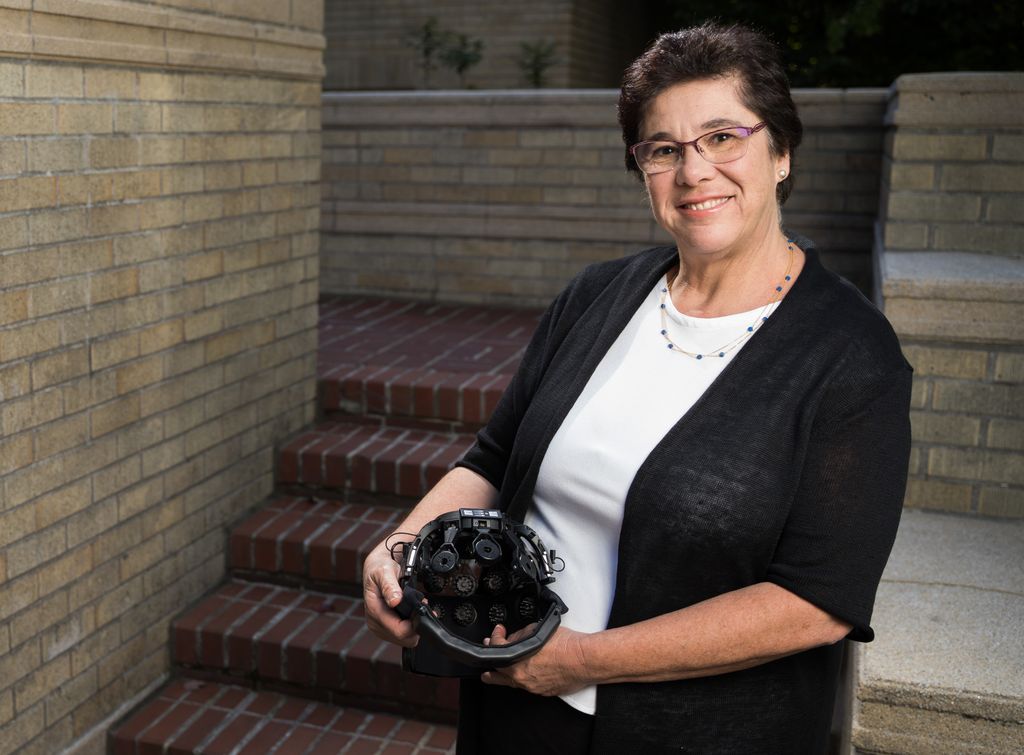 Melanie Fried-Oken, Ph.D., CCC-SLP., worked with computers long before they were a thing, but, she’s not a technologist; she’s a therapist.

“As a child, I loved languages,” says Fried-Oken, co-director of the OHSU University Center for Excellence in Developmental Disabilities, and a professor of neurology, pediatrics, biomedical engineering and otolaryngology/head and neck surgery in the OHSU School of Medicine.
Fluent in English, French and Hebrew, her collegiate plan was to major in French language studies. But that quickly changed when she  took a course called, “The Psychology of Language.”
“It was all about how people learn language and what happens to that language if a brain injury were to occur,” she says. “I was hooked.”
Focused on a new career path in experimental psychology, which centers on the scientific study of the processes of learning, memory and cognition, Fried-Oken obtained a clinical master’s degree in speech-language pathology. Then, in 1979, while working to obtain her Ph.D. in the interdisciplinary study of language behavior from Boston University, she took a research assistant position with the Rehab Engineering Center on Communication Enhancement at Tufts University School of Medicine.
It was here, well before the first consumer-facing personal computers were on the market, that her clinical and research interests merged with technology.
“We were building the very first talking computers for children who couldn’t speak,” Fried-Oken proudly recalls. “And, as the team’s speech-language pathologist, I had the honor to teach three young children with cerebral palsy how to utilize these unique machines that would give them an opportunity to verbally communicate with their school friends and family.”

After relocating to Portland, Oregon, in 1985, Fried-Oken began working with adult patients living with severe acquired and developmental communication impairments. Her goal: find ways that these individuals could participate verbally in their daily lives.

She did this by offering patients specialized equipment built with large circuit boards and mechanical switches. While these dedicated devices were considered clunky and expensive, they were successful in giving people a voice.
“At that time, the field wasn’t well-defined,” explains Fried-Oken. “What we did on a daily basis was to provide alternatives for communication for people who couldn’t talk. Or, we’d augment someone’s communication to make them more functional. But, there wasn’t a good term to describe this work.”
So, she and her colleagues created one. In 1986, the field became known as Augmentative and Alternative Communication, or AAC.
“That’s how it all got started, and I’ve been involved ever since,” Fried-Oken says.
AAC is now used by individuals with a wide scope of speech and language impairments resulting from strokes, ALS, cerebral palsy, Parkinson’s disease, autism and other developmental disabilities. Methods range from unaided communication, such as sign or body language, to aided approaches, which use external tools and technologies.

Collaboration is key for Fried-Oken.
Together with  colleagues at OHSU’s Oken Cognitive Neuroscience Lab, the OHSU Center for Spoken Language Understanding, and the Department of Electrical and Computer Engineering at Northeastern University in Boston, she now is working to develop new brain-computer interfaces, or BCI, for patients who are cognitively intact but lack the necessary motor skills to communicate.
One of less than a dozen research groups worldwide with unique expertise in BCI, a science that uses technology to detect changes in brainwaves that form choices, Fried-Oken and team have developed a novel AAC method for spelling with Rapid Serial Visual Presentation of letters, called the RSVP Keyboard.
With this method, large individual letters are quickly flashed on a screen. When a patient who is wearing an EEG cap sees the letter, word or symbol they want to select, their brainwaves change and are translated as keystrokes to inform spelling, just as individuals who have use of their hands would type on traditional computer keyboards.

Gregory Bieker was diagnosed with locked-in syndrome, a condition of complete paralysis and loss of speech communication, following a brainstem stroke. After meeting Fried-Oken in clinic, he became a part of the OHSU BCI investigative team and helps researcher to design studies, and test equipment and AAC methods.
Watch Gregory use OHSU’s BCI technology.

The OHSU Northeastern group is going one step further with the RSVP Keyboard BCI. They incorporate predictive letter selection into the system, using sophisticated language algorithms to tell the BCI what letters are likely to be chosen, similar to the predictions available on smartphones that suggest words as we are texting.
“Despite its benefits, communicating letter by letter can be a long and frustrating process for individuals. We knew there had to be an option to help speed up the letter selection process, and, while there is still more work to be done to perfect this predictive technology – it’s looking quite promising,” she says.
The key to truly understanding the needs of a patient for the development of AAC technologies is “input from patients,” Fried-Oken says. “They are the experts and the most important part of our research team.”
The OHSU team is known internationally as a BCI research group that relies on the input of individuals living with severe speech and physical impairments, as well as their families and caregivers. Their experience and insight are considered at every stage of development and research.

For 50 years, Fried-Oken has witnessed firsthand the evolution of technology and communication, and her research projects, which have been grant-funded from the start, have always been driven by finding solutions for people with complex communications needs.
While society has largely celebrated technological advances, some have questioned the human impact of technological advances suggesting limitations in attention span, physical fitness, personal interaction and device dependence.
But, as a clinician-scientist, Fried-Oken has a different point-of-view: “Affordable mobile technology has created a huge paradigm shift in terms of communication,” she explains. “Before tablets or smartphones, assistive technology for children and adults with disabilities stood out and signaled difference. But now, everyone has a device. Everyone uses technology to communicate, not just those with complex communication needs. Communication technology has created a sense of equality. And for those who require AAC, a feeling of freedom and ability to make meaningful contributions to society.”
Previous Story OHSU physician-scientist focuses on a good night’s sleep Next Story Laying the groundwork for precision medicine

Breaking the cycle of obesity