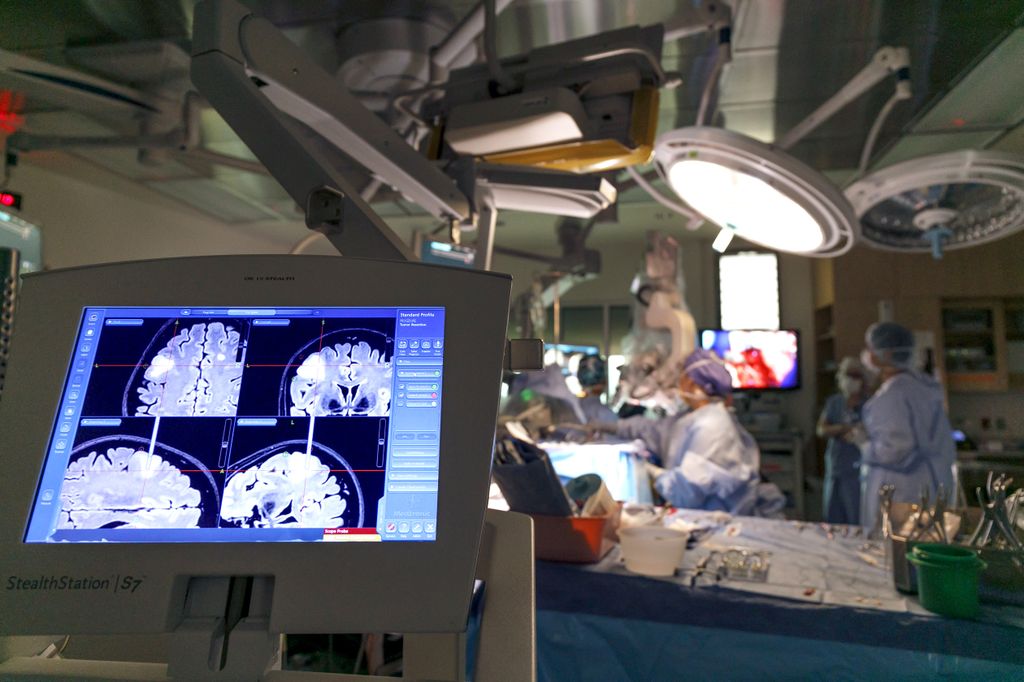 Oregon Health & Science University is the only center in Oregon at which brain surgery patients are actively involved in guiding the procedure – specifically language mapping – while they are awake.

The procedure is a delicate undertaking. It involves a careful choreography starting with the patient and including a team of surgeons, nurses, anesthesiologists, neuropsychologists and specialists who not only monitor the patient’s vital signs but also measure brain activity during the procedure. 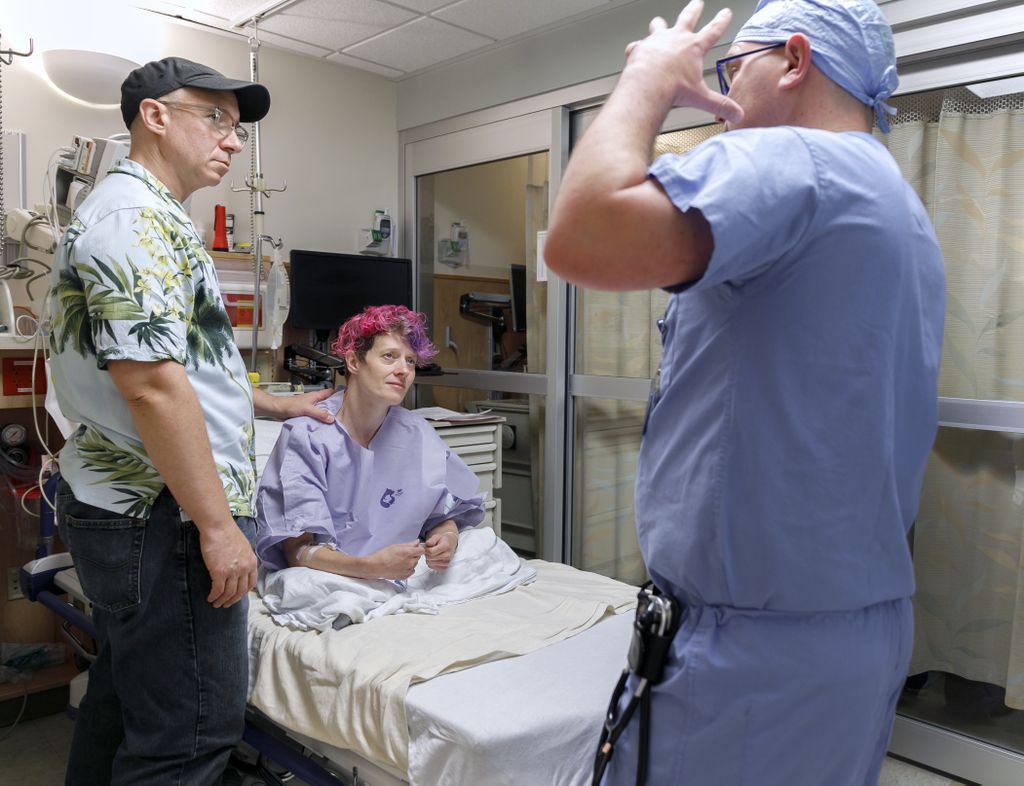 (Left to right) Tom Quick, and his wife Bonnie meet with anesthesiologist Matthew Healy, M.D., before Bonnie is taken back for surgery.. (OHSU/Kristyna Wentz-Graff)

Over the past two years, OHSU surgeons have successfully conducted dozens of these procedures involving removal of brain tumors and, more recently, treatment of epilepsy by removing the seizure focus area through small incisions. In terms of cancer patients, tumors straddling important cognitive areas of the brain were traditionally seen as too high risk for surgical intervention. Instead, those patients were referred for radiation or chemotherapy.

The awake surgery is useful when it’s necessary to operate in areas close to the brain’s cognitive centers, such as language. The only way to test cognition is to be awake and capable of communicating during the procedure. 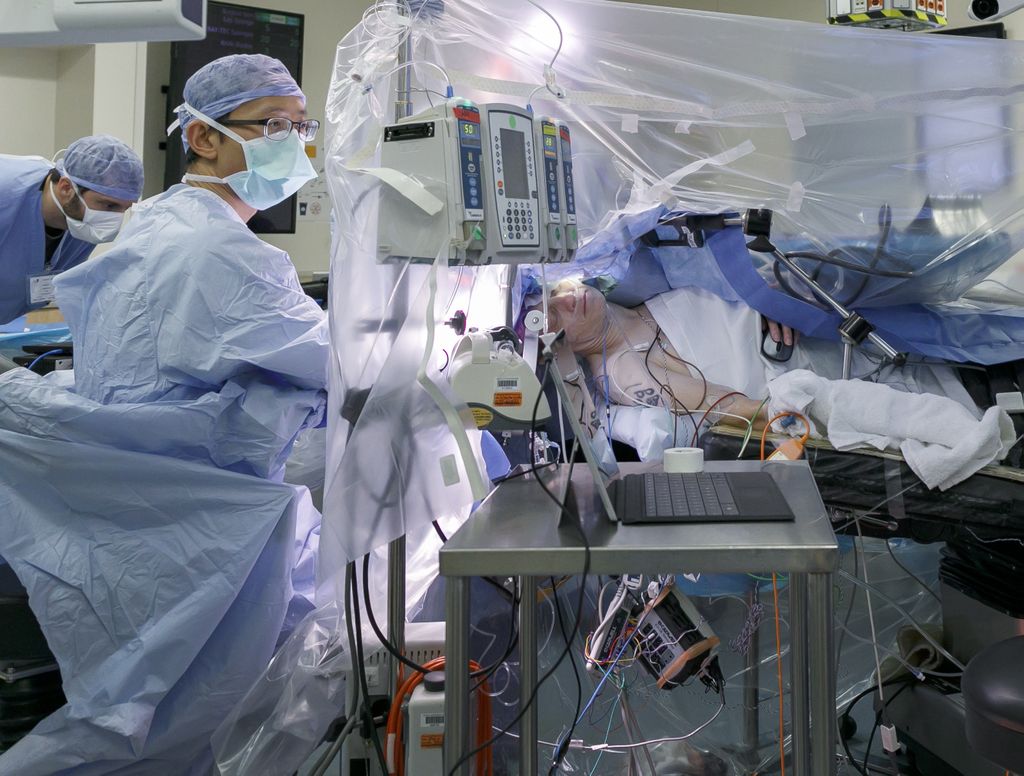 Neurosurgeon Seunggu Jude Han, M.D. (left) talks with Bonnie Quick, who is responding to questions and directions during her surgery. (OHSU/Kristyna Wentz-Graff)

“To walk the fine line between preserving the function and taking all you can of the tumor, you need to test patients in real-time,” said OHSU neurosurgeon Ahmed Raslan, M.D., the program director and associate professor of neurological surgery in the OHSU School of Medicine.

The idea of doing brain surgery while awake is not unprecedented – a few institutions do it outside of Oregon, and in fact OHSU has done it for almost two decades. The new aspect involves harnessing technology to assess the patient’s cognition before and during their brain surgery, then using that information to ascertain their cognitive function during the procedure. 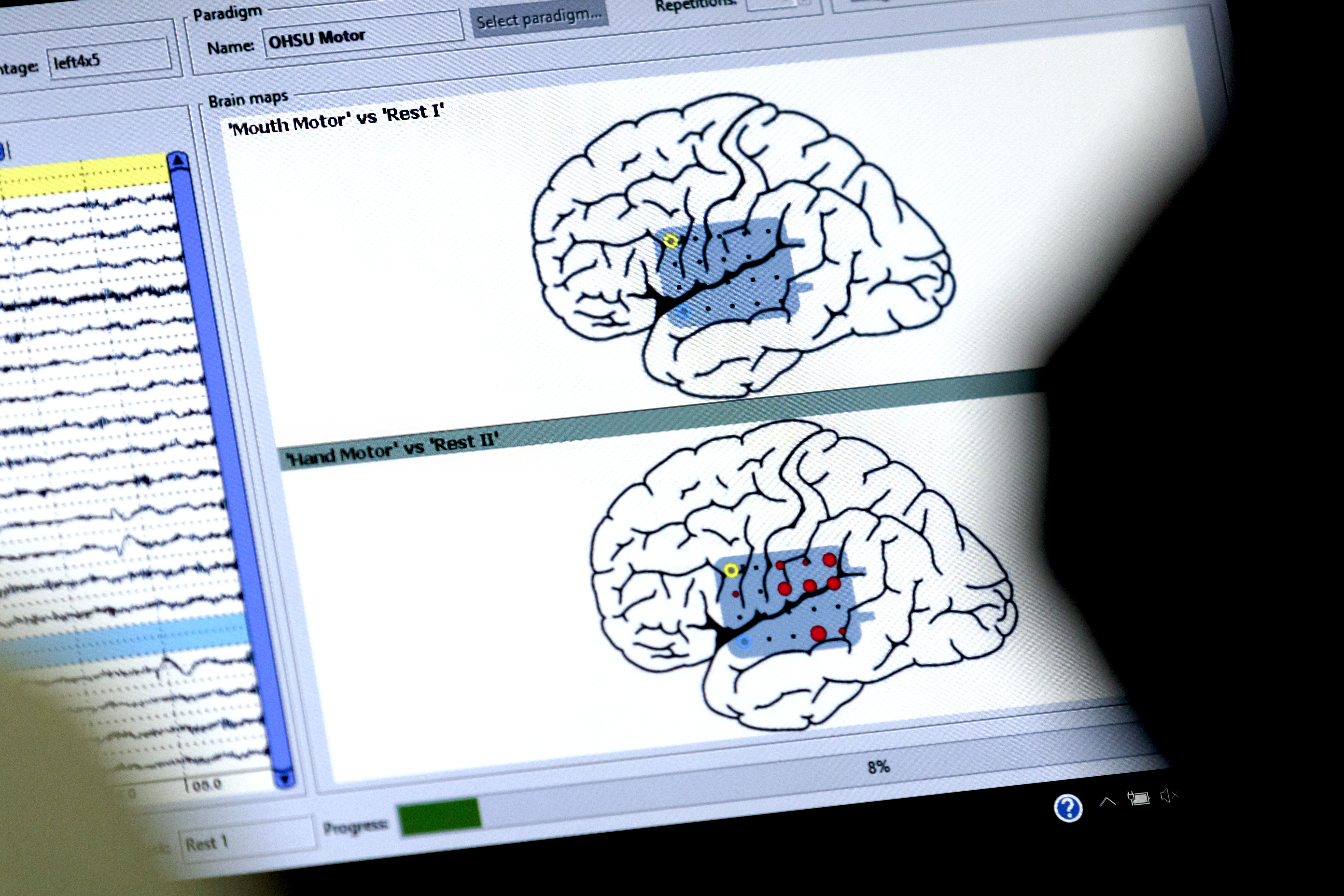 A monitor displays patient Bonnie Quick's brain perceiving, processing and directing actions as she responds to prompts given during the procedure. (OHSU/Kristyna Wentz-Graff)

They will then stimulate different areas of the cortex, the outer layer of the brain, to determine critical areas of cognition before removing the tumor.

A milestone involving a Spanish-only speaker

The program marked a new milestone Oct. 1, with the first awake craniotomy involving a patient who speaks Spanish only. OHSU fellow and neuropsychologist, Dana Dharmakaya Colgan, Ph.D., managed the Spanish translation of the cognitive tests and the training of a Spanish interpreter.

“This required a considerable amount of preparation and effort,” said neurosurgeon Seunggu Jude Han, M.D., assistant professor of neurological surgery in the OHSU School of Medicine. “Cases like this really speak to our three missions as an academic health center and also reflects the growth and direction this program is headed.”

As Oregon’s only academic health center, OHSU scientists are using the treasure trove of information gleaned during these procedures to improve our understanding of how the brain functions.

“Advanced technology and enhanced coordination of multidisciplinary clinicians have really revolutionized this procedure,” said Barry Oken, M.D., Ph.D., professor of neurology, behavioral neuroscience and biomedical engineering in the OHSU School of Medicine. “Providing surgeons with real-time feedback regarding patients’ cognitive processing during the craniotomy has increased our ability to perform maximal resection while preserving postoperative functioning.” 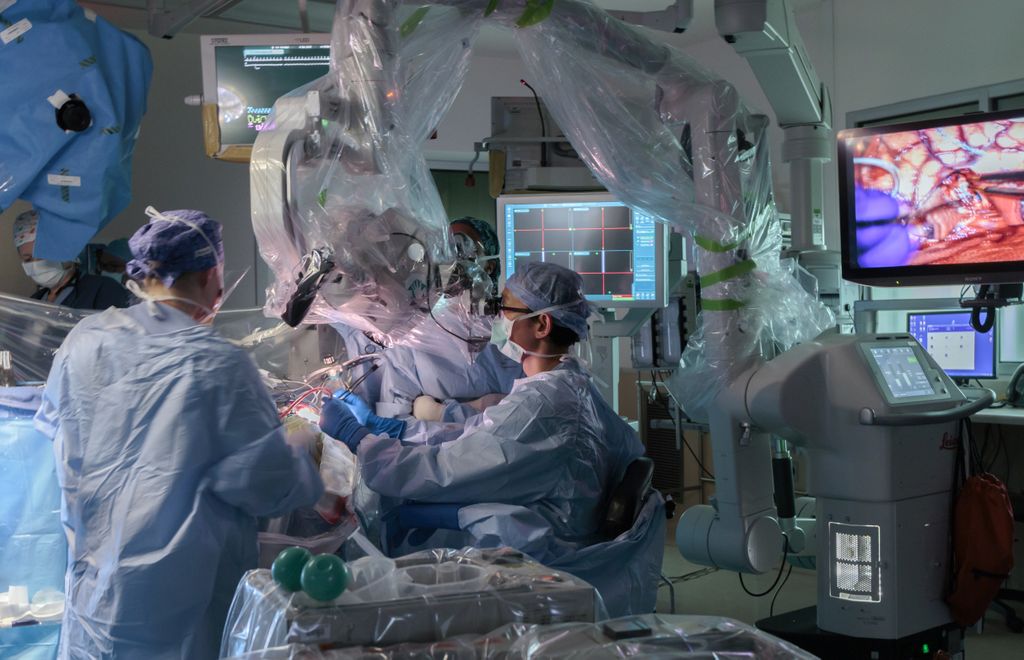 (Left to right) Tom Quick, and his wife Bonnie meet with the anesthesia team before Bonnie goes in for brain surgery on October 4, 2019. OHSU performs 40-50 awake craniotomies with language mapping annually. (OHSU/Kristyna Wentz-Graff)

Signage on the outside of the operating suite alerts staff that the patient is awake. OHSU performs 40-50 awake craniotomies with language mapping annually. (OHSU/Kristyna Wentz-Graff)